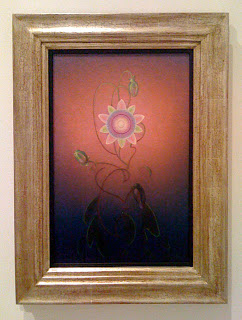 Pelton rules (again) in the Orange County Museum of Art's "Illumination: the Paintings of Georgia O'Keeffe, Agnes Pelton, Agnes Martin, and Florence Miller Pierce." Partly, it's a matter of numbers. Pelton's works are smallish, and the show includes a plurality of her best-known works. (Pictured: Passionflower.) On the other hand, you wouldn't expect a four-way show touring second-string museums to get the best Georgia O'Keeffe loans, would you? This one doesn't. The O'Keeffes are mostly small, early, or very late.
The show is at pains to draw biographical parallels between all four exhibited artists. What works as comparative biography doesn't work so well on the wall. The first rooms pair Pelton and O'Keeffe, and the second section is devoted to Martin and Pierce. This reminded me of the rule that actors shouldn't follow dogs or children. It's not a question of which Agnes is better; it's just that context matters. Super-laconic abstractions don't stand up well next to passionflowers.
Email Post
Labels: Agnes Martin Agnes Pelton Florence Miller Pierce Georgia O'Keeffe OCMA

SarahW said…
Great post..You should feature your services/products on the Newport-beach community, classifieds section.
September 21, 2009 at 9:07 AM