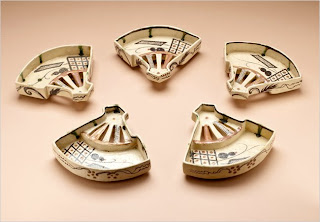 Jori Finkel has an amusing piece on LACMA's Collectors Committee in The New York Times: "nowhere is the sales prowess of museum curators exhibited more theatrically." The 2009 installment funded half the cost of the big Matta painting (just placed on view in the Latin American galleries) and bought a Kuba textile collection. There wasn't enough money to buy an Arthur Heygate Macmurdo chair, a suite of Hiroshi Sugimoto wax figure portraits, or a set of tea-ceremony vessels by Furuta Oribe. But Japanese curator Robert Singer lobbied donors for the Oribe plates after the meeting and reported it's a "done deal." Singer already had an export license and rated the set “the most famous Japanese ceramics that have in 450 years been allowed to come to the West” — barring only the Ogata Kenzan plates already in the museum's collection. Michael Govan called Singer the "Ty Cobb of Collectors Committee," as all but one of 18 previous pitches have succeeded.
Email Post
Labels: Furuta Oribe Jori Finkel LACMA Matta Robert Singer