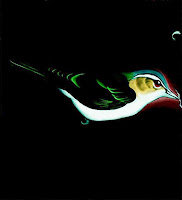 The Huntington's expanded American galleries will reopen with a vintage Ruscha on loan from collectors Joan and Jack Quinn, Bird Drinks Creek Dry, Fish Escapes (left). It's one of a series of quirky, natural-history Ruschas that has been getting attention lately. Originally shown at Ferus Gallery in 1965, the birds were seen by critics as a step backward from the text paintings. Some felt the not-necessarily helpful influence of Magritte. The paintings more directly riffed on the field-guide school of avian illustration. (At the Huntington, the clueless are sure to confuse it for a John James Audubon.) 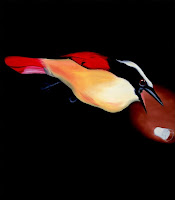 As Ruscha's reputation has burgeoned, forgotten parts of his oeuvre have been revisited. In 2002 C&M Gallery, New York, reunited the series in the well-received "Birds, Fish, and Offspring." Locally, another Ruscha bird, Angry Because It's Plaster, Not Milk (right), has been on loan at the Broad Contemporary Art Museum. Ruscha hadn't given up text paintings; Annie and other classics are contemporary with the birds. Check out Ruscha's catalogue raisonneé website for an idea of how diverse his 1965 production was.
Email Post
Labels: Ed Ruscha Ferus Gallery Huntington Library John James Audubon