Gorky, Matta, and Eros in Connecticut 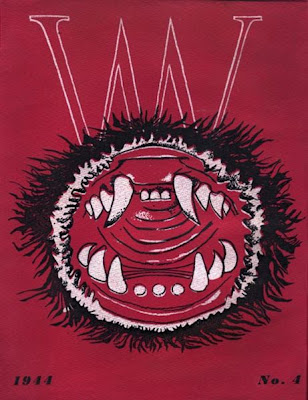 Once upon a time, surrealists walked the Connecticut exurbs. Expatriates like André Breton and Yves Tanguy were joined by a plethora of surrealism-influenced Yankees like Alexander Calder, Peter Blume, and Arshile Gorky. MOCA's "Arshile Gorky: A Retrospective" presents its subject as a stylistic hermit crab, serially adopting, then abandoning, the visual ideas of Cézanne, Picasso, Matisse, Kandinsky, and Breton. The last of Gorky's artistic crushes was Roberto Matta. Chilean-born and thoroughly cosmopolitan, Matta was living in New York. It was Matta who introduced Gorky to the technique of thinning oil paint for watercolor-like effects. Gorky used this to create drips to be embraced, not controlled, by the artist's mind and hand. That paradigm shift anticipated Pollock and just about everything immediately afterward. But there were other parallels between America's and Chile's great surrealists. Matta-Gorky could be a great exhibition and maybe a better movie. Matta had an affair with Gorky's wife the month before Gorky's suicide. The art world blamed him for Gorky's death. Furious, Breton expelled Matta from the surrealists. 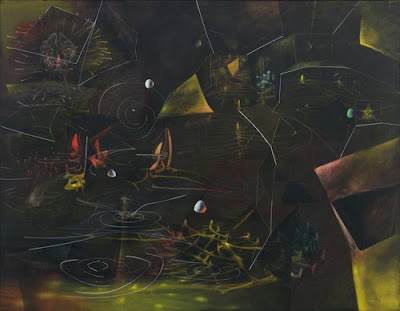 Start with Matta. He began producing his spacey "inscapes," such as The Vertigo of Eros (above, 1944) in the late 1930s. The title is a Duchamp-style bilingual pun. It also refers to Freud's idea that the mind is balanced between desires for sex and death. The abstraction of the inscapes soon led backwards (in the Alfred Barr schema) to a wiry, existential illustration, seen in such works as A Grave Situation (1946, below). 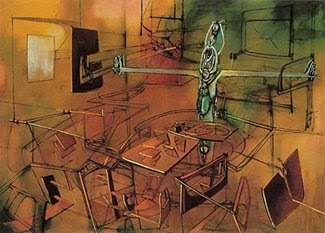 Matta's art was always strongly linear. He supplied the notorious vagina dentata cover for the last (1944) cover of the short-lived VVV magazine, pictured at top. (VVV was edited by Breton, Duchamp, David Hare, and Max Ernst, with Aimé Césaire and Robert Motherwell on the editorial board. Could there be any magazine like that today? Any website, any cable show, any anything?) 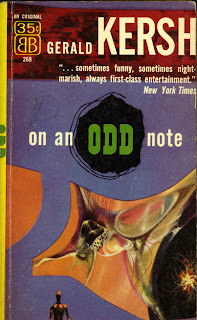 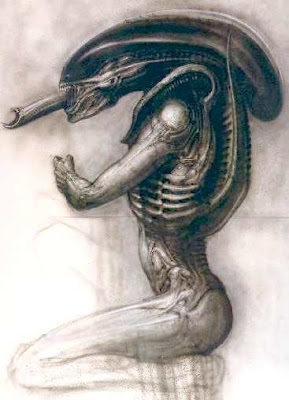 Gorky related to the linearity of Matta's art. For much of his career, Gorky was so impoverished that he favored drawings over oil paintings. The MOCA show has a poignant room of many drawings, and just two paintings, from his Nighttime, Enigma, and Nostalgia series of the early 1930s. (The space recently held the Ruscha Chocolate Room.) 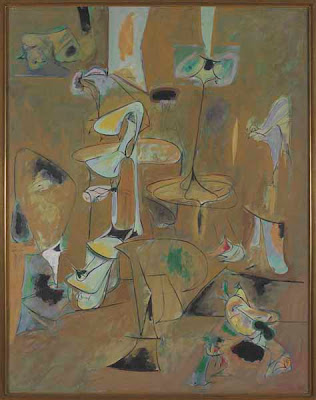 After his breakthrough summer in Virginia (1943), Gorky was doing biomorphic abstractions with strong outlines. This led to 1944's The Liver is the Cock's Comb and MOCA's 1947 The Betrothal (above), done after a studio fire and a devastating operation for rectal cancer. The MOCA painting is autobiographical, alluding to Gorky's anxieties about marrying above himself, as the 1940s country club set saw it. The insectoid Venus fly-trap, with spiky teeth, represents Gorky's wife, Agnes ("Mougouch"). Gorky had a reproduction of Uccello's Battle of San Romano in his studio, and he was thinking of the crowns worn by Armenian brides. The picture equally evokes the surrealist themes of vagina dentata and the praying mantis, which devours her mate. 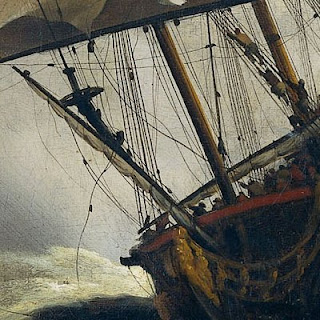 Apparently it was Willem de Kooning who clued Gorky to the "liner." So called because the Dutch masters used it to paint the rigging of ships, the liner is a fine paintbrush designed to supply long continuous strokes of oil pigment. (Left, a small detail of Willem van de Velde II's A Ship in Need in a Raging Storm, c.1680.) De Kooning used a liner in such paintings as Attic (1949, below). Matta must have been using it or something like it. 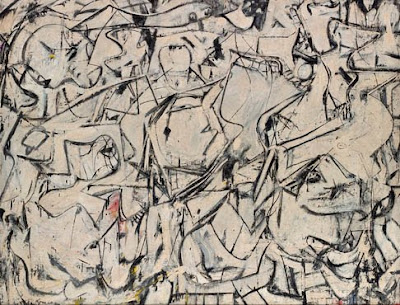 On June 5, 1948 — 62 years to the day before the MOCA show's members opening — Matta visited the Gorkys in Connecticut. According to biographer Hayden Herrera in Arshile Gorky: His Life and Work (2003),

"After everyone had retired for the evening, Matta noticed that, because of its angle, the open window to Gorky and Mougouch's attic bedroom reflected their bed. As Matta told the story, he saw Mougouch's reflection reflected on the window of the floor below. While it is unlikely that any window opened in such a way that Matta could have seen via reflections up into Gorky and Mougouch's bedroom, it made a good story. Matta must have gone outside, stood in the grass, and looked up. He was smitten…"

Within days Agnes/Mougouch and Matta were having an affair. Matta, from an affluent background himself, told Agnes that they were "tweedy." Gorky, the poor Armenian immigrant, was "oily."
Gorky soon found out about the affair. The following month, on July 16, Gorky contrived to meet Matta in Manhattan. Gorky blew up and chased Matta through Central Park, brandishing his cane and comparing Matta to Joseph Stalin. Matta talked Gorky down, assuring him that Agnes was not about to leave him.
From this Matta concluded that Gorky was out of his mind. He told Agnes as much. She took the children and left Gorky. 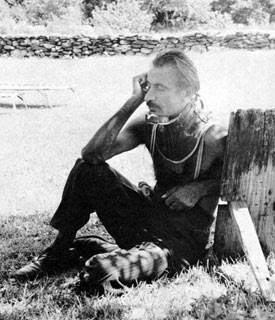 On June 26 dealer Julian Levy drove Gorky to a psychoanalyst, believing it would do him some good. It didn't, insofar as Levy hit a road post and spun the car over on the way home. Gorky fractured a collarbone. His painting arm was useless — permanently or not, it was hard to say. There's a photo of Gorky from this time (left) that is notable because of who took it: the visiting Cuban surrealist Wilfredo Lam.
Gorky must have used his good arm to tie a noose in a length of clothesline and hang himself in a shed on July 21. His body was discovered by two celebrated neighbors, critic Malcolm Cowley and magic realist painter Peter Blume.

"Malcolm and I went up to the waterfall and the road sort of petered out and we had to stumble around in there. And we looked all over, thinking that he might possibly try to hang himself from one of the overhanging trees, because I thought that he had sort of a profound interest in the waterfall. And because it was so far removed from everything else, I thought this might be the place where he might choose to commit suicide. But he wasn't anywhere around. So we started wandering… Gorky had two dogs, a dachshund and a huge dog as big as a horse. And when we saw this little dog barking as we came up, we knew this was where Gorky was…"

This was about the time that Blume put the finishing touches on his masterpiece, The Rock (below). The American press presented Blume as a bad boy of the avant garde, incomprehensible to those not schooled in the latest European developments. That's further evidence of just how exceptional Gorky was. 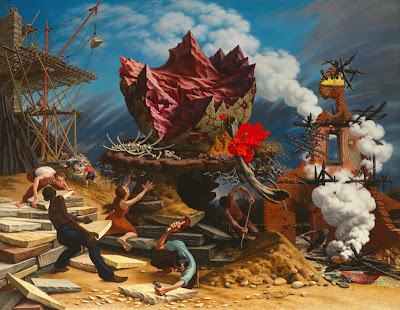