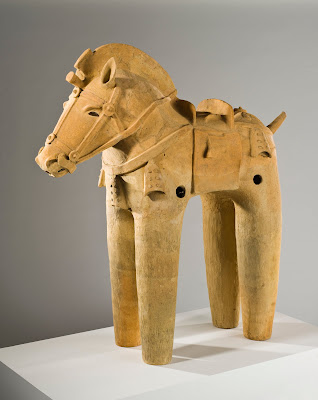 The L.A. Times predicts that LACMA's newly acquired Haniwa horse will be an icon of the Japanese collection. Dating from the 6th century, it may be the largest such terracotta horse known. Curator Robert Singer seems to have hit on a winning formula: LACMA trustees will open their wallets for cute animals. Besides fitting into the menagerie, the horse has connections to modern art and contemporary pop culture. 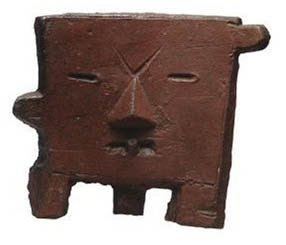 L.A. native Isamu Noguchi helped spark the modernist appreciation of Haniwa sculpture. After encountering Haniwa sculptures in Japan, Noguchi made somewhat more abstract figures in terracotta (right). To mid-century collectors, Haniwa figures were an Eastern counterpart to Cycladic idols, so archaic they were consummately modern. A 1958 Time magazine piece likened the Haniwa aesthetic to cubism, and that must have been high praise for the kind of people who read Time in 1958.
Two decades later Nelson Rockefeller was hawking popularly priced reproductions of modernist and older masterpieces. The most popular offering was a faux Haniwa head priced at $75. It sold over a thousand copies, more than Rockefeller's equally fake Picassos and Giacomettis. 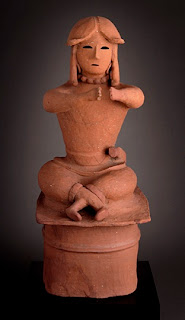 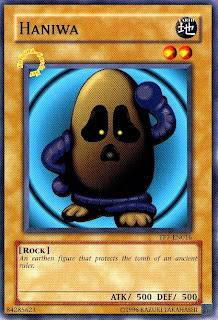 Today Haniwa are a major part of Japanese youth culture. An approximate American analogy might be the mummy mythos, in which Hollywood transforms static museum relics into vengeance-seeking wraiths with merchandising possibilities. The Haniwa figures, which were made for tombs, include humans as well as animals and ritual objects. (LACMA's other Haniwa sculpture, a seated warrior, was acquired in 1958, left). In fictional treatments, the sculptures house still-active spirits of the dead. Of course, Haniwa have it all over mummies in the cute department. In Japan, Haniwa appear on a staggering variety of merchandise. In the contemporary iconography, a Haniwa is a winsome everybeing holding a hand to its head. The hollow eyes and mouth recall the Munch spook of the Scream movies. (Pictured, a YuGiOh card and an image from Japanese TV's Telepathy Shojo Ran.) 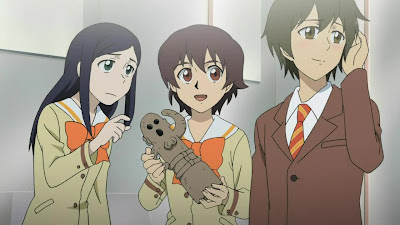