Terror of the Wax Museum 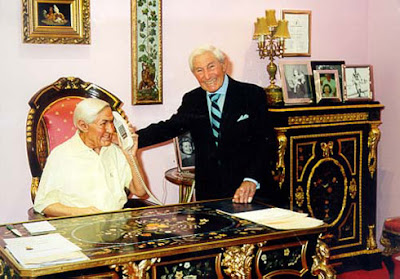 LACMA's newly installed room of 18th century Italian painting includes a handsome pietre dure cabinet from the Florentine Ducal Workshops. The cabinet isn't so surprising as the name on the label. It's a loan from the collection of Arthur Gilbert (above right, with wax effigy on left. More on that in a moment.) For longtime museum followers, that's like a voicemail from a half-forgotten, particularly vengeful ex. London-born and Beverly Hills-based Gilbert was one of LACMA's most toxic trustees. A typical Gilbert sound bite, from 1993: “I think everything in the Anderson Building [then the modern and contemporary wing] is junk.” LACMA put up with Gilbert because, in 1975, he promised his capacious collection of historic European silver, pietre dure, micromosaics, and snuffboxes to the museum. The micromosaics rivaled the holdings of the Vatican and the Hermitage. The silver and gold was, well, silver and gold. Gilbert loved guesstimating its current value, always much more than he'd paid and favoring values well into the nine figures. For years, Gilbert's collection was on loan to LACMA, glistening under spotlights in sepulchral, windowless spaces. Gilbert had this kooky, Twilight Saga idea that his artworks shouldn't be exposed to daylight of any kind.
Then in 1996, Gilbert withdrew the loan and revoked the gift. Like many another LACMA trustee, he had convinced himself that the museum did not truly appreciate his collection ("In a nutshell, the place is run by three trustees who are only interested in contemporary work"); that it was a great injustice to the public when any piece was not on permanent view; and that the remedy — naturally, for the sake of said aggrieved public — was to establish a new museum named after said aggrieved trustee.
Gilbert fielded offers from other U.S. museums and his native Britain. The collection would have made sense at the Victoria and Albert Museum. But Gilbert hated the V&A. "It's like a junk shop," he snarked. 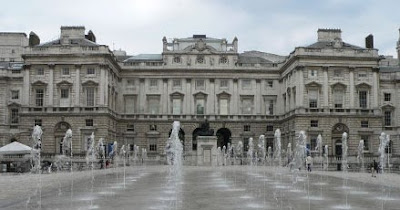 He finally got the Brits to establish "The Rosalinde and Arthur Gilbert Collection" in London's stately Somerset House (above). Gilbert donated the collection, the Queen Mother formally accepted in 2000, and Gilbert was duly knighted. He said: "I am not an altruist. And when I die what I have will go to the people of the world, whether they like it or not."
Curious words, and prescient. How much of an audience is there for a boutique museum of 800 works of 16th- through 19th-century European decorative arts of the fussy/precious persuasion? The Somerset House display attracted 200,000 the first year. Then attendance flatlined. It wasn't something the public wanted to see twice.
Gilbert's Somerset House curator, Tim Schroder, had planned a space for changing shows, to encourage repeat visitors. But in a "vigorous exchange of views" Gilbert floated his own idea for the space: a wax replica of Gilbert himself in a simulation of his Beverly Hills office. Gilbert's second wife commissioned the figure from the company that supplied the Hollywood Wax Museum. The Brits bit their tongues, and the waxwork was displayed just as the Gilberts wanted. Another Gilbert opinion/suggestion/demand was that everything of solid gold should be in a separate room, away from mere silver. Art history should defer to the periodic table. Also, advised Gilbert, "most of this stuff should be shown without any light at all."
Gilbert died in Los Angeles in 2001. The collection remained on view in Somerset House through 2008. It was then booted out to make room for — d'oh! — the very sort of contemporary art that Gilbert despised. Gilbert's collection was transferred to — double d'oh! — the Victoria and Albert Museum. Given 17 rooms in Somerset House, it was compressed into four rooms at the V&A. Key pieces were moved elsewhere in the museum, to be shown next to related works. 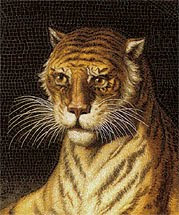 All of that made perfect sense. Gilbert's collection ran from the sublime to the ridiculous. He loved reproductive micro-mosaics, those copying paintings. His favorite piece of all was a snarling George Stubbs Tiger, rendered in tiny little glass shards. He had a mosaic after an Alma-Tadema.
The V&A now seems to be in the process of farming out Gilbert pieces to any qualified institution that will take them. According to the V&A website,

"Some pieces from this vast collection, including objects made by Paul de Lamerie, will be incorporated into displays elsewhere in the V&A, including the Whiteley Silver Galleries. Some of the silver will be returned on loan to the historic houses for which it was originally made, to Uppark, West Sussex; Belton House, Lincolnshire; Erddig, Wrexham; Shugborough, Staffordshire, and Dunham Massey, Cheshire. Hardstone (pietre dure) objects from the collection will also be on show to the public at the Cliffe Castle Museum in West Yorkshire. Further examples from the collection can also be seen at the Royal Pavilion in Brighton."

In restituting pieces to their country house origins, the V&A is nullifying the activity of Gilbert the collector. That may not be a terrible thing, but it's hard to imagine Gilbert approving. (Was anything proposed by a curator ever to Mr. Arthur Gilbert's taste?) 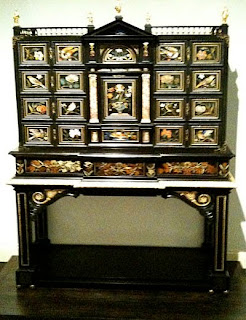 The moral of the tale is that art finds its level. In the long run, when we are all dead, objects will be displayed and appreciated, or not, according to how much future audiences care to look at them. Collectors and their attorneys are virtually powerless to change that.
The cabinet at LACMA, left, is neither Gilbert's best nor worse. It's good enough to enhance a room with works by the Tiepolos, Canaletto, and Sebastiano Ricci; plus a fantastic rococo mirror that trumps it all. The label describes the Gilbert cabinet as a long-term loan [to LACMA, triple d'oh!] from the Gilbert Collection, on loan to the Victoria and Albert. Somebody at LACMA must have mad diplomacy skills.
Email Post
Labels: Arthur Gilbert George Stubbs Hollywood Wax Museum LACMA Somerset House Twilight Saga Victoria and Albert Museum

Anonymous said…
Tim Shroder used to work at LACMA. In 1988, he published The Gilbert Collection of Gold and Silver. No wonder the collection ended up back with him at Somerset.
June 30, 2010 at 4:11 PM

AimlessInLA said…
Whatever Arthur Gilbert's shortcomings in taste may have been; however 'stuffy' the objects in his collection may seem to some people today, they were consistently popular when they were at LACMA.

Maybe they didn't do so well at Somerset House because Londoners have vastly greater opportunities to view any number of interesting artifacts from the era concerned. With relative ease they can travel to Florence or St. Petersburg themselves and see galleries of such decorative arts.
March 16, 2012 at 9:29 PM