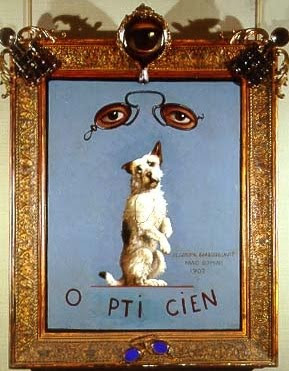 The Getty has done a number of shows resurrecting the reputation of once-successful artists. The latest installment is "The Spectacular Art of Jean-Léon Gérôme." If the intention is to promote Gérôme as an A-list nineteenth century artist, good luck with that. Today Gérôme has two audiences, art historians who use him as a whipping boy for colonialism and racism, and a contemporary bourgeois viewership not so different from the one that made Gérôme a success in his lifetime. In the Venn diagram of art appreciation, the intersection of these circles is just about nil. Surrounding the circles is the larger universe of those who think Gérôme is kitsch, interesting or not so much. 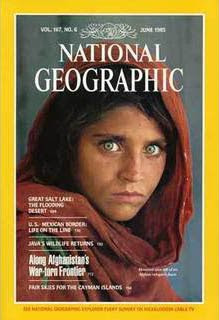 Which type of Gérôme lover/hater are you? Stare deeply into the eyes on the cover of the June 1985 National Geographic. You will appreciate Gérôme in proportion to how much you like Steve McCurry's "Afghan Girl."
At any rate, that's the gist of Gérôme's fascinating imperialism: "Those people" are different from us and yet almost the same. Hey, some of them are good-looking.
There's a frisson in contemplating Wagner's antisemitism because we care about Wagner's music. Gérôme? Eh. How worked up can you get about the political incorrectness of the mediocre? You deal with that every time you grab the remote. 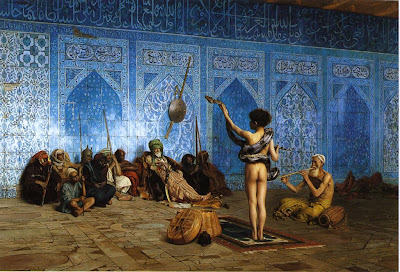 It's something of a puzzle why the Getty did this show. They have only one Gérôme, an oil sketch of the artist's early The Age of Augustus. The Getty sketch barely registers here. Were they bent on revisiting a once-successful academic painter, why not Winterhalter, Tissot, or Alma-Tadema? The real pity is that the show, organized by the Musée d'Orsay and the Getty, isn't going to Baltimore's Walters Art Museum. It was until the stock market crashed and the Walters had to bail out. Many of the show's most unforgettable paintings come from Baltimore. One is Diogenes, below. Landseer dogs putting the puppy eyes on the original cynic. They sure don't paint 'em like that anymore. 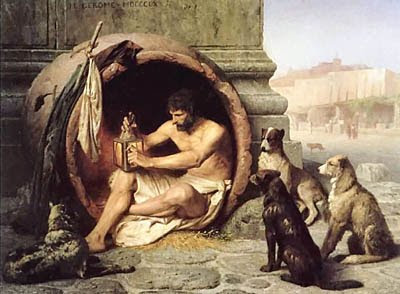 A motivation for bringing the show to Los Angeles must have been the Getty Research Institute's 2008 acquisition of an amazing trove of Orientalist photographs. In the middle of the galleries is a sampler of this collection and a few loans, connecting the photos to Gérôme's paintings. This may be the most conventionally satisfying part of the exhibition. The photos raise the same Western gaze issues as the paintings, and the GRI has 4500 of them. 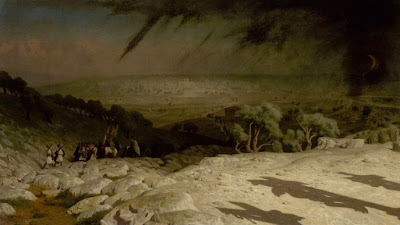 One of the show's revelations is what a radical bad boy Gérôme was to his contemporaries. Think Manet, Maurice Cattelan, and South Park. Conservative critics hated paintings like Jersusalem (above) because it thumbed its nose at solemn subject matter and the lofty expectations of art. The crucifixion is reduced to a shadow as the eye looks somewhere else. It must have been the visual equivalent of Mel Brooks and Carl Reiner's 2000-Year-Old Man.

Reiner: I asked you, did you know Jesus?
Brooks: Yeah, sure. I've seen him, right, sandals, 12 guys followed him around. They all came in my candy store. They never bought anything, they asked for water. 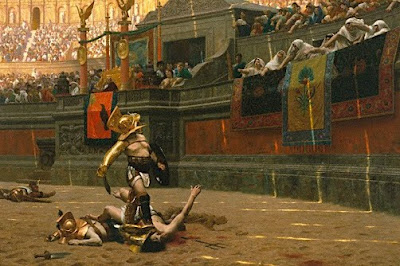 Another running theme is the Hollywood connection. Ridley Scott credited Gerome's Pollice Verso (above) as an inspiration for his film Gladiator. This is a fascinating visual genealogy, though it doesn't elevate either Pollice Verso or Gladiator to the next aesthetic level.

In paintings like the Walters' The Duel After the Masked Ball (1857-9, above left), Gérôme placed hyperreal figures against a hazy scrim of a background. It resembles the weird technique of American painter and sculptor William Rimmer in works such as LACMA's The Sentry, above right, c. 1872. Rimmer's 21st-century critical esteem, what there is of it, vies with Gérôme's — a fact that would have astounded both.
Six Flags should design its roller coasters like this show. Just when you think you've seen it all, the floor drops out from beneath you in the last room. This is Gérôme the sculptor. Yikes. There's a phase of contemporary sculpture that explores transgressive bad taste — Nathan Mabry's Dead Men Don't Make Sculpture comes to mind. Gérôme's sculpture is the mother of all bad taste, but its audience was the opposite of Mabry's. The polychrome nudes scandalized critics and were snapped up in reproduction by the middle classes. Is there anything by Gérôme that's good in the usual sense of "good"? A candidate is a gem of a portrait of architect Charles Garnier, a friend of the artist. It's almost as perfect as a painted portrait could be. The well-deserved exclamation point at the end of this long, strange show is Gerome's Optician's Sign of 1902 (top), made for a competition of artist-designed shop signs. This uncharacteristic work was admired by Salvador Dali and conceivably inspired Manuel Alvarez Bravo (right, Optical Parable, 1931). Yes, it's easy to say that the "surrealist" quality is retrospective and that Gérôme didn't, couldn't, have intended what we appreciate about it now. For once, Gérôme was way ahead of his time.
Email Post
Labels: Getty Museum Jean-Léon Gérôme Nathan Mabry National Geographic Steve McCurry William Rimmer

Donald Frazell said…
Perfect. Is there truly a difference between the works of gerome and his time and that we glorify now that dribbles out of OUR academies? Not to anyone who is outside of the institutional monster. You have slowly been Pavlovian trained inside the belly of the beast, we outside jsut shrug our shoulders when seeing contemot stuff, and say, Its art.

That is an insult we dont care to follow up on, it is irrelevant, we got better things to do. And have far more experience of life, and so understand what is truly important, and what is childish narcissism. We have teenagers, we see this absurdity all the time. And have no time or tolerance for it.

After being out of art for 13 years raising my kids, a creative act outside the experience of most artistes, and the only one that truly matters, I can verify, NO!
My god i was horrified when i started painting and looking at the trash that has risen in the 90s and early 2000s, i quit when the mediocrity of neo ex was till in the air, only Kiefer a great artist, but came back to Koons and Baldessari and Nauman and YBAs, literally, God help us.

art collegia delenda est
Save the Nuestro Pueblo, tear down the Ivories.

ps. i recently had my finger bit off and stabbed in the back, literally, by scared,arrogant and sociopathic artistes. It is time for art to have a gut check, do you have any?
June 23, 2010 at 9:30 AM

Donald Frazell said…
He had talent and skill, but was basically an illustrator on a huge and egotistical scale. Not a creative one like say Blake. One is fascinated initially by the detail and excess, but not emotionally like a Moreau.

Gerome work has nothing to do with reality like he wants to claim, as dreamlike as it is. what are these people doing sitting on the ground, outside it seems, as he probably was never let in, the work looks like the side of a mosque. And perverted while gazing at a naked boy and his, er , snake. It could be almost as weird with a naked woman for no reason, but this is obviously a child. Perv. And such were his clients, and thats where the similarity with todays art "market" comes in. slabs of meat for sale.

Not mind, nor body, nor soul is exalted here, but lowered into the gutter.

Save the Watts Towers, tear down the decadent Ivories. In his day as much as ours, the Salon has been rebuilt, and just as rotted.
July 2, 2010 at 6:25 PM

Jack H. Schwartz said…
Gerome was truly one of the greatest painters of the 19th Century French Academy. His sense of panorama, story, history, detail, romanticism, lucid technique, drama and realism set him apart from all who endeavor to emulate his greatness.
March 29, 2012 at 6:22 AM

Jack H. Schwartz said…
Donald Frazell, I would recommend readers to visit your web page. It will provide them with the full perspective behind your aesthetic philosophy. http://dfimagery.com/
March 29, 2012 at 6:35 AM