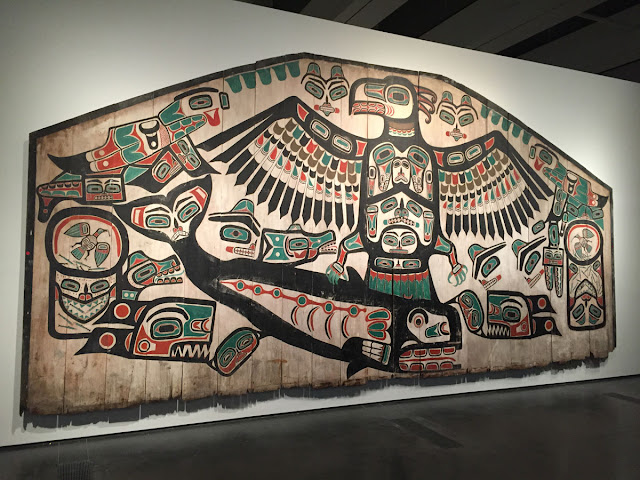 For those unclear on the concept: LACMA does not have a big endowment for buying art. Instead a group of museum supporters meets each April to raise money for acquisitions. Curators are allotted a 5-minute slide show to make the case for artworks they want to buy. The Committee members fill out a ranked ballot, and artworks are purchased in order of popularity, until they run out of money. This year they didn't run out of money. Everything offered was bought. 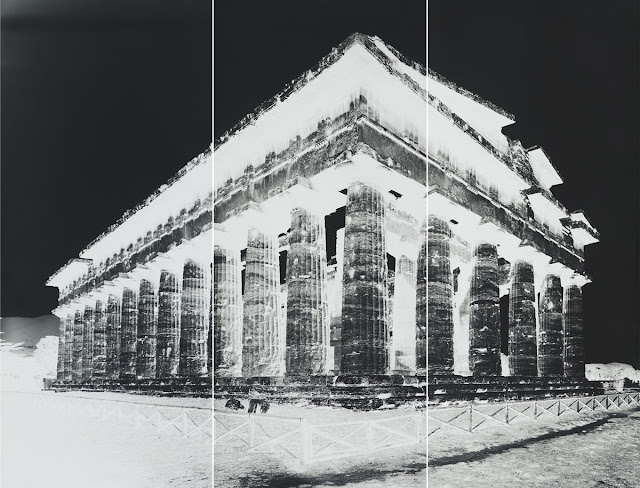 The first purchase, with special funds provided by Kelvin Davis, was a large camera obscura view of the Temple of Nettuno, Paestum (2015) by Vera Lutter, who's documenting LACMA's rather less classic Pereira campus. 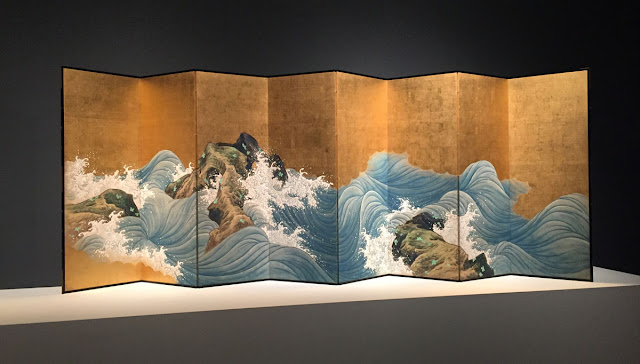 Japanese Art curator Robert Singer presented the most expensive work (at $480,000), a pair of eight-panel screens of the Kyoto River (c. 1810) by Yamaato Kakurei. Kakurei is something of a mystery: One of the foremost pupils of Maruyama Okyo, he painted Okyo's only known portrait. But little of Kakurei's work exists. Singer terms these screens, identified two years ago in Kyoto and recently conserved, a "game-changing discovery." They would have been displayed in a stately Kyoto home to inspire cool thoughts on a hot day. 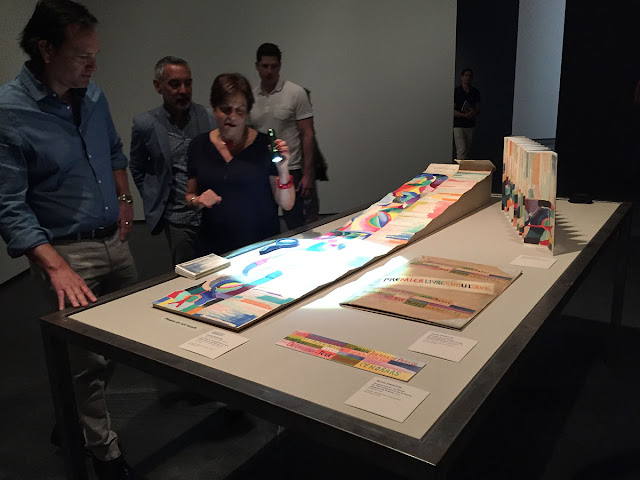 Singer informed the committee that another potential buyer (the Kyoto National Museum) was interested in the screens, a closing technique also employed by modern art curator Stephanie Barron. Barron was pitching a pristine copy of Sonia Delaunay and Blaise Cendrars' famous artist's book, La Prose du Transsibérien et du la Petite Jehanne de France (1913). Barron said a Museum of Modern Art curator told her that MoMA would buy the Delaunay if LACMA didn't. MoMA already has a copy of La Prose du Transsibérien, but it's "very faded." That's not trash talk—the colors in the LACMA version are spectacularly vivid and unlike what you may have seen elsewhere. The 6+ foot Orphist abstraction was hand-painted by Delaunay, in watercolor and gouache, using stencils. The detail below shows a red Eiffel Tower. Delaunay's husband Robert did a cubist Eiffel Tower in red, but this is more definitively abstract. 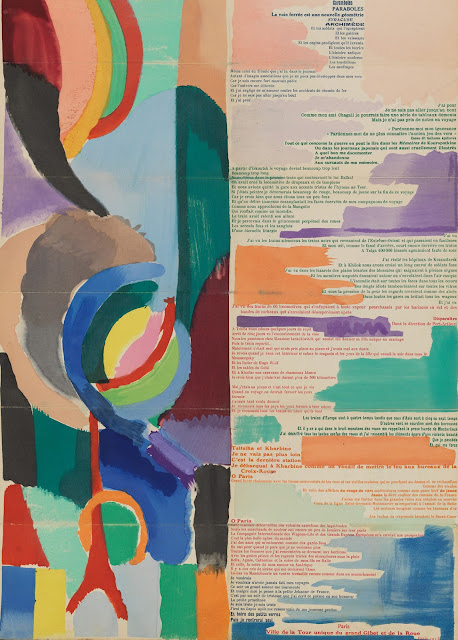 Delaunay and poet Cendrars planned an edition of 150 for La Prose, but less than 100 were produced, and barely 30 can now be traced. This copy was owned by Chilean artist Manual Ortiz de Zarate, who introduced Diego Rivera to Picasso and died in Los Angeles in 1946. It comes with a hand-painted "wallet" and joins a prospectus and portfolio that LACMA acquired a few years ago. La Prose du Transsibérien is a high-water mark of the pre-war avant-garde, and LACMA's copy would now appear to be the go-to specimen. 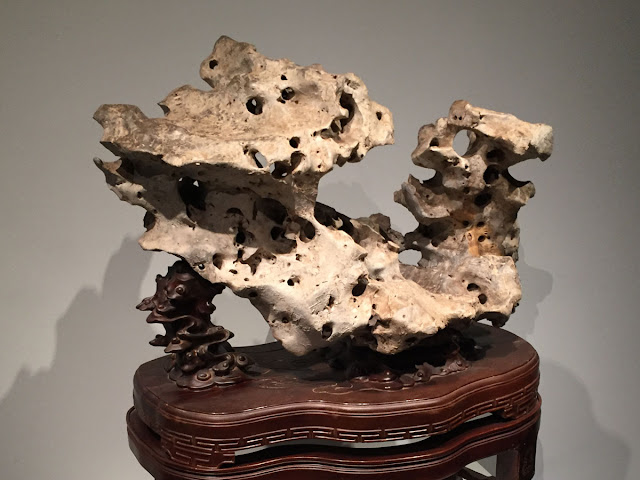 The Chinese and Korean department acquired a scholar's stone, the first in the collection. Also Chinese, but acquired via the Costumes and Textiles collection, is a Man's Formal Court Robe of the Qing Dynasty, early 18th century and said to be unique outside of China. 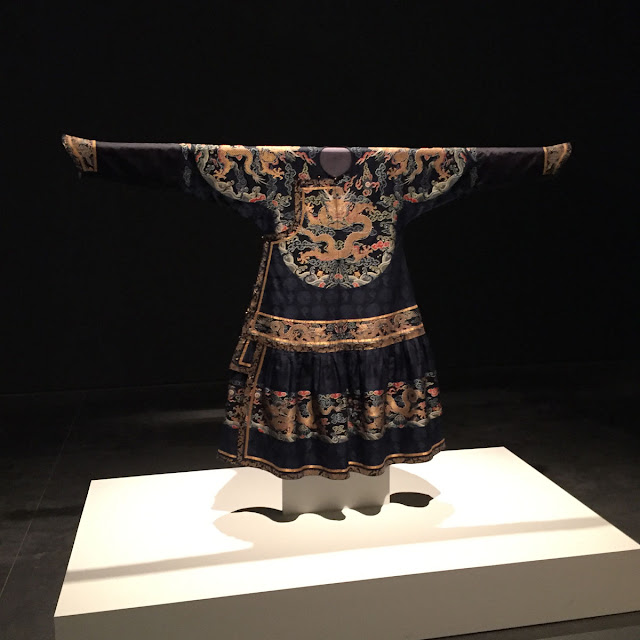 The Prints and Drawings department acquired the archive of Venice-based Hamilton Press, founded by Ed Hamilton and Ed Ruscha. A joint acquisition with UCLA's Grunewald Center, it excludes Hamilton's Ruscha prints, for LACMA already owns them. It's about 300 lithographs by 86 artists, spanning the blue-chip Venice scene and street-art outliers such as Robbie Conal and Kenny Scharf. (Shown, Jonas Wood's Double Basketball Orchid, 2017). 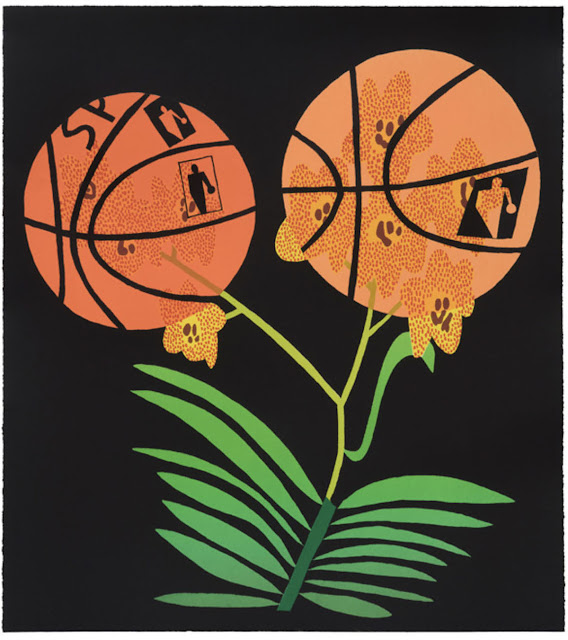 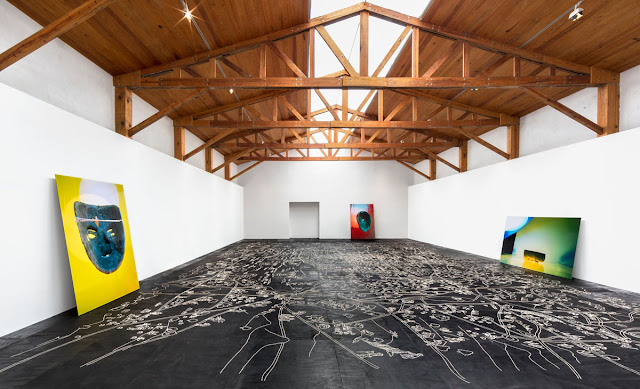 The Collectors Committee has added examples of contemporary Islamic art every year since 2010. This year it added three: Shirin Neshat's Amir (Villains), 2012; Khosrow Hassanzadeh's Pahlavan II, Ready to Order, 2008; Yasmin Sinai's The Act of Gordafarid, the Female Warrior, 2015 (below). All are a gift of Lynda and Stewart Resnick, and all will appear in a 2018 show on historical themes in contemporary Iranian art. 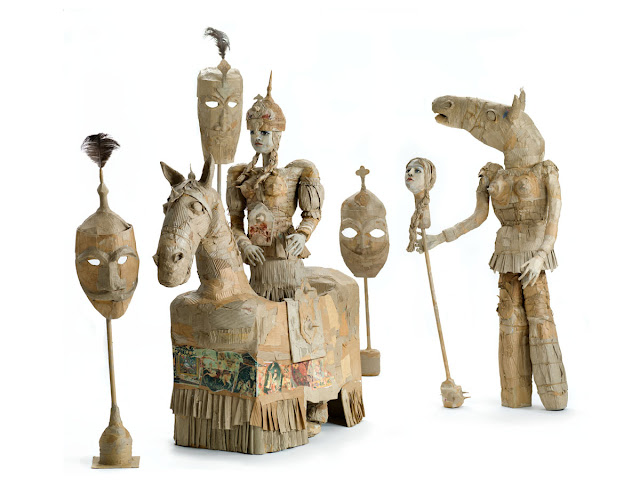 There's been a lot of talk about how encyclopedic museums can or can't represent women artists, given millennia of patriarchal art history. Well… ignore the scholar's rock by Mother Nature, the post-Ferus Studs of Hamilton Press, and the unknown makers of the Qing robe. The 2017 Collectors Committee purchases include eight works by known makers, and five are by women.

Another conversation is the trend of mainstreaming Native American art into American Wings (as the Met plans to do). When LACMA split off from the Natural History Museum in the 1960s, the Native American material stayed in Exposition Park. Such 1960s art museums as showed indigenous art often labeled it "primitive." That term was retired, but many museums still have gerrymandered curatorial departments lumping Native American art in with Oceanic and African objects. There was also an awkward Cowboys and Indians moment of showing Native Americana alongside the "Western" art of Remington and Russell. Yikes! 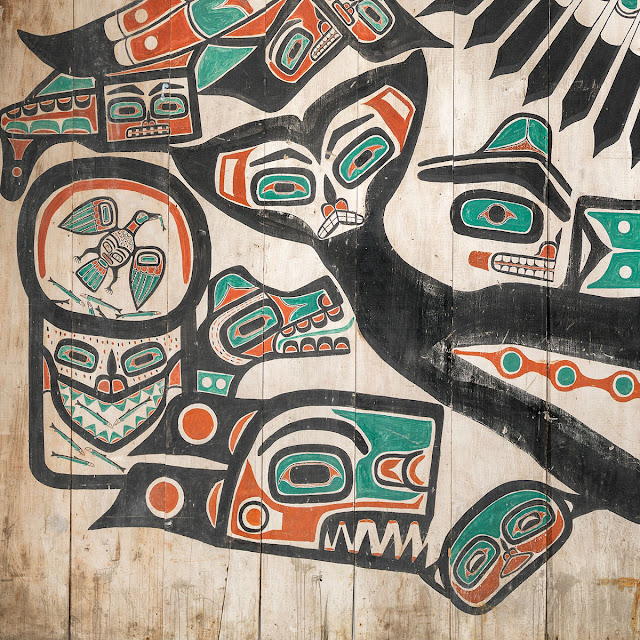 The Thunderbird House Screen (championed by Polly Nooter Roberts, otherwise LACMA's consulting curator for African art) is a spectacular introduction to the Northwest Pacific Coast, one of the most important centers of indigenous art. Made of Sitka spruce panels with abalone shell inlays, it is unusually well-documented. Mike Moore of the Small Lake Tlingit commissioned it in the late 19th century to replace a screen lost in a fire. The artist was Rudolf of the Raven clan. A house screen is a heraldic room divider, figuring in potlatches and other functions. Here the main motifs are the Thunderbird and Orca (as in a Ford convertible and Sea World's Shamu—a demonstration of how intertwined the cultures of indigenous and immigrant America have become).

Should LACMA ultimately show the Thunderbird screen alongside so-called American art, it would be the collection's most monumental American painting. The freaky fractal faces of Tlingit art were once praised as modern; now they're just as easily read as postmodern. The metaphysical quality of a staring creature is not to be denied. (See Raymond Pettibon's owl, a 1998 lithograph from the Hamilton Press archive.) 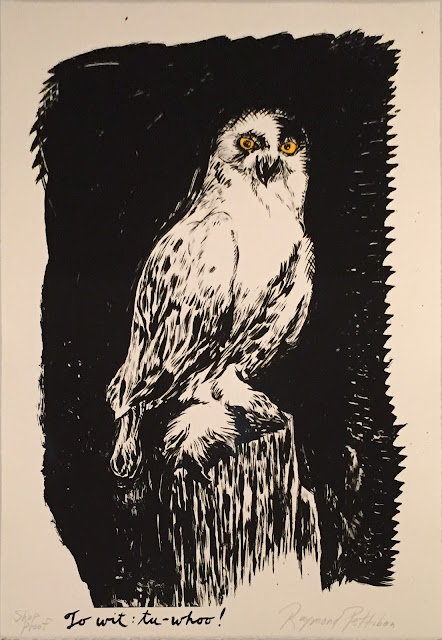 Unknown said…
As a member of the Thunderbird House of the Shark Clan of the Auk Kwaan Tribe, I find it horrific that a museum owns the screen to our house. While it is important that the screen be preserved in an institution capable of maintaining its integrity, the Alaska museum in Juneau, Alaska would have been a much more appropriate place. Then my community and I could easily visit and see this important artwork and reminder of who we are and where we come from. With our high rates of trauma, terrible health and education disparities, Native people, particularly our children, need reminders of our great heritage around us and not inaccessibly thousands of miles away. I realize that you spent a lot of money to purchase a piece of my community's heritage and recognize your right to do so. However, I would challenge you to ask yourselves who should be at the table when you consider purchasing future pieces. One of the primary issues and causes of poor health outcomes of Native people is invisibility. We must be seen and you have the opportunity to help us address our invisibility by including us in decisions affecting us.

I also ask you to consider your language when writing or speaking of the artwork/heritage of another culture. I take offense at the remark "freaky fractile faces of Tlingit...." Seriously, this is the language used by professionals within an art institute? And did you really need to explain Thunderbird and Orca by relating them to a car and a theme park whale?

Jerrick Hope-Lang said…
Mary J. Owen’s comment is exactly what needs to be said. Thank you for your wise words. I’m appalled someone would buy this. It doesn’t belong in LA or away from its people. I’m shocked it was sold in the first place. This belongs to a tribe, not individuals.