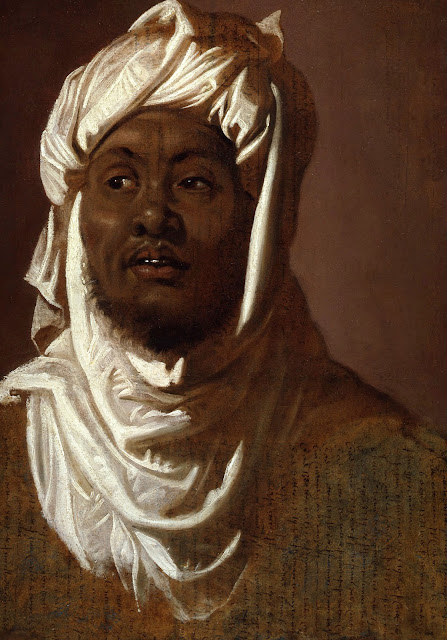 Britain has placed a temporary export bar on a Rubens drawing the Getty wants to buy. Head of an African Man Wearing a Turban, a 1609 oil sketch on paper, is one of the 16 drawings and one painting that the Getty announced as a purchase last July. The anonymous seller is believed to be U.K. collector Luca Padulli. The export bar, through July 5, 2018, allows a British institution to match the Getty price for the Rubens, reported as an even $10 million. Should there be serious interest from a U.K. buyer, export can be deferred until Jan. 5, 2019.

In February the U.K. placed a similar bar on a John Martin watercolor. Most of the works in the Getty acquisition had not been in Britain long enough to require export licenses and are now on view together at the Getty Center, though April 22.

Despite the Rubens drawing's seven-figure price tag, the artist didn't spend much for materials. The support is repurposed ledger paper. The vertical "stripes" in the man's robe are an Italian accountant's neat handwriting.

Zack said…
Has any American museum other than the Getty ever been thwarted by the British art export system?
April 8, 2018 at 8:48 PM

William Poundstone said…
The Met, Kimbell, and other U.S. museums go through the same process. In 1999 the Kimbell lost out on a Botticelli because the National Galleries of Scotland raised the £15 million price. The Kimbell's director was then Timothy Potts, now the Getty director.

It was always a given that Britain was going put a temporary export bar on this Rubens. The only real news here is that they've revealed the price a British party would be expected to match.
April 9, 2018 at 7:43 AM