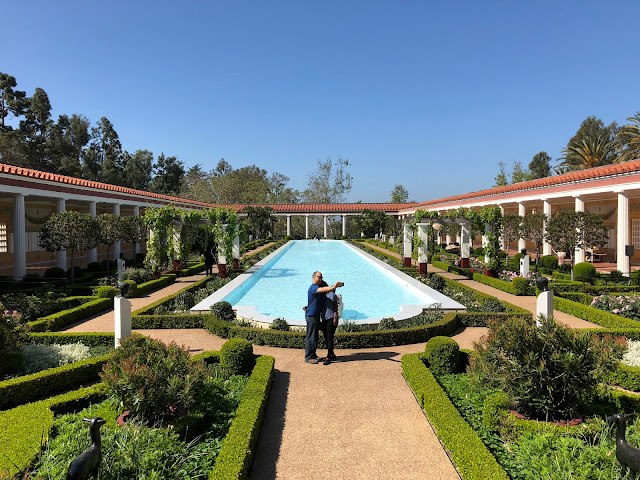 The Getty Villa has completed its reinstallation, replacing the thematic groupings the museum has had since its 2006 reopening with a more standard art-historical chronology. I'll speak mainly of the ground floor, devoted to Greek and Etruscan art. Click for my Nov. 2017 take on the top floor's Roman galleries. 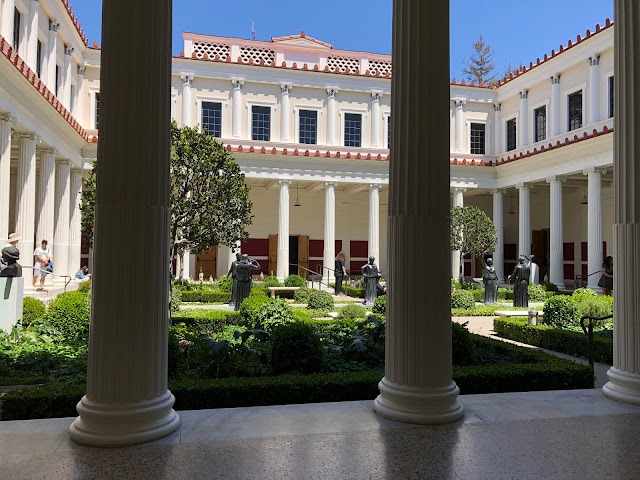 Disneyland v. Art History. At the Villa's 1974 opening some critics dismissed it as another Disneyland. The public liked Disneyland, and the Getty Villa. The museum has never had to worry about attracting crowds, including those who wouldn't know Hellenistic from Helen of Troy. That's why the thematic installation seemed a misplaced gesture. Middlebrow visitors adore the Villa, above all the building and its setting. But not many read labels or spend enough time in a single room to analyze why it contains the set of objects it does. For them the objects might as well be displayed alphabetically, or randomly. Yet they go home, having experienced a special place, with antiquities part of that experience.

It is only the more engaged visitors who ponder how a collection is arranged. The new chronological install improves their experience, for reasons the Getty has articulated; and does so without decreasing the Villa' s populist street cred one iota. 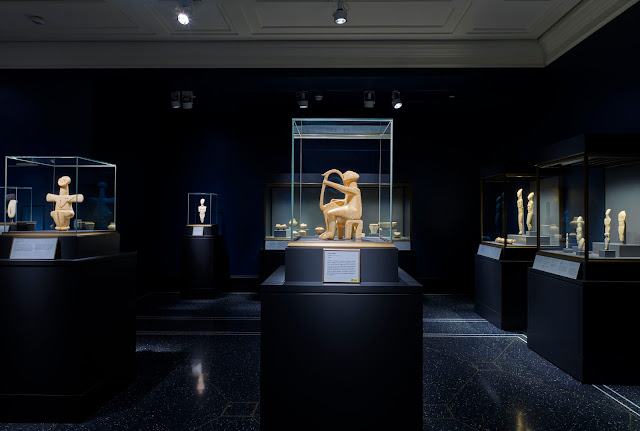 Back to the Future. The Villa timeline begins with Neolithic and Bronze-Age Greece (top). There was a similar grouping in the 2006 install, but now it's on the ground floor. The dark walls and new lightning and cases take on a sci-fi edge, like Bacon's cages for screaming popes.

And like a museological TARDIS, the Getty Villa has expanded by 3,000 square feet while retaining its outer dimensions. Several under-used spaces have been converted to galleries. The new Bronze-Age gallery replaces the former TimeScape room. That was an attempt to compensate for the lack of a clear timeline, now unnecessary. 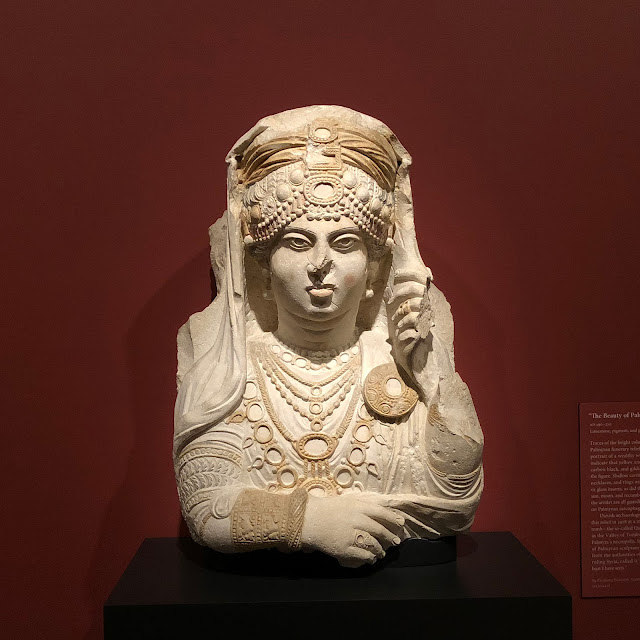 The Beauty of Palmyra. One of the most intriguing new features is the "Classical World in Context" gallery. It is to show long-term loans of works from cultures that interacted with Greece and Rome. The gallery opens with a year-long display of portrait sculptures from ancient Palmyra, midway between Rome and Persia. Lent from Copenhagen's Ny Carlsberg Glyptotek, these are tomb portraits, idealized relative to the naturalism of Rome. The so-called Beauty of Palmyra is an exception. Danish archaeologist Harald Ingholt judged it "the most beautiful female bust I have seen." Sultry, bejeweled, almond-eyed and double-chinned, the unknown woman has come to exemplify Palmyra's grandeur.

Adios, Kouros. Less is more when it comes to the Getty Kouros. It's gone. "It's fake," Timothy Potts told The New York Times. Many words have been spilled over the Kouros, but Potts' two say it all.

It was Jeffrey Spier who, in 1990, published the stylistically similar and clearly fake "Kouros" that decisively challenged the Getty statue's legitimacy. The Getty hired Spier as its senior curator of antiquities in 2014. He directed the reinstallation, and it puts the Kouros where it belongs, in a storeroom available for inspection by interested scholars. 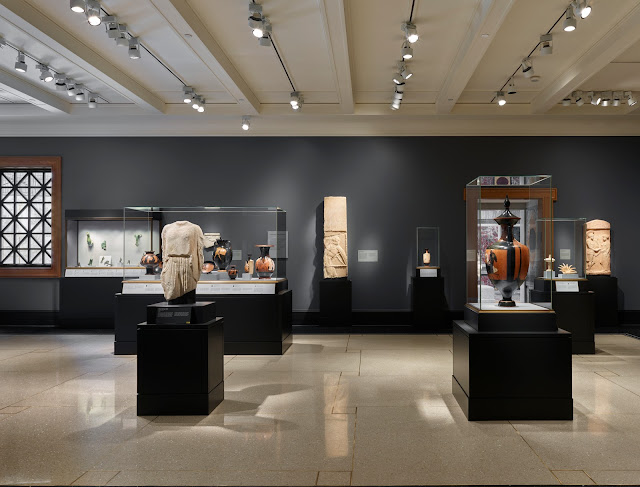 Archaic art can now be shown without distraction in two galleries. The larger displays the fragmentary Elgin Kore, a clothed female version of what the Kouros purported to be. Adjacent is a smaller gallery (a former coat-check) with a fantastic selection of Archaic vase painting. 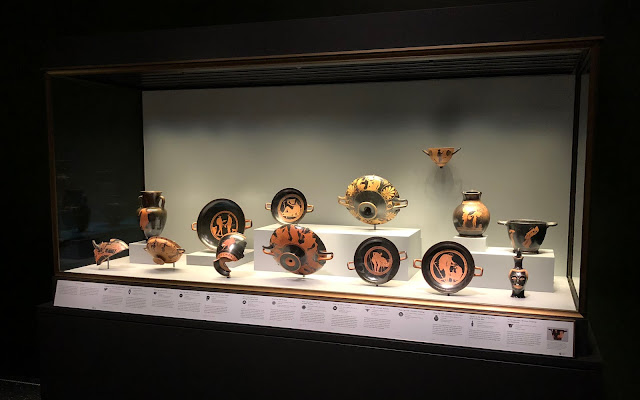 The vase room is arranged by themes like the symposium and Hercules. They aren't so different from the themes in the former installation. The issue is not so much chronology v. themes as which is to be the Roman numeral heading and which is the subhead. 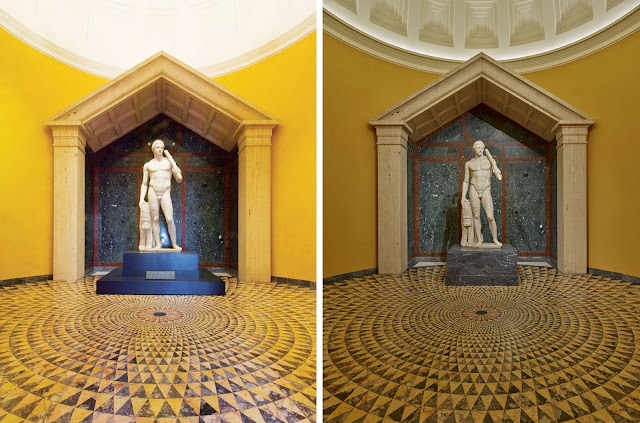 Getty the Collector. J. Paul Getty and his building may be the only populist "themes" that first-time visitors are genuinely curious about. They want to know how this audacious building came to be here; who J. Paul Getty was; whether ancient Romans really lived this way. A set of ground-floor spaces now center on Getty's biography, art collecting, and the Villa dei Papiri.

My first reaction was, that's an awful lot of Getty (especially since the Getty Center also has a newly opened Getty-centric gallery). But some sort of interruption to the timeline is inevitable. The spaces in question are the Villa's most flamboyant, reproducing Roman architectural elements and thus crashing the chronological toga party. That includes the Landsdowne Hercules in the "Temple" Getty decreed for it. It's c. 125 AD and could hardly be moved upstairs. An upgrade many won't notice is the statue's seismic isolation base. It's  smaller and and less intrusive (right photo above), revealing more of the marble floor reproducing one found in the Roman Villa dei Papiri. 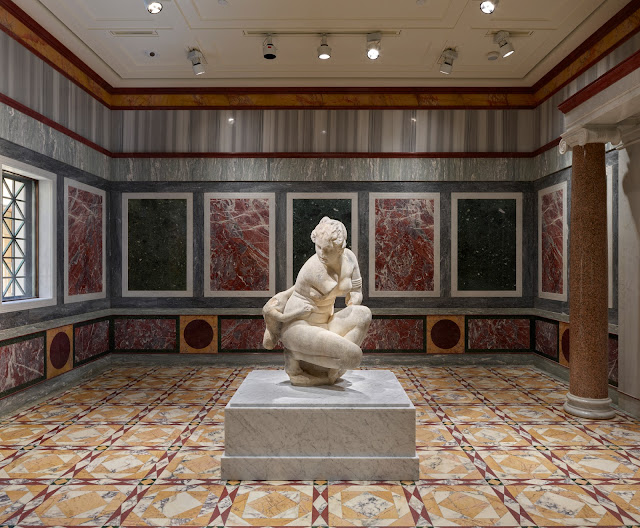 J. Paul Getty collected mistresses along with images of Venus, the love goddess. The original, 1974 Villa's installation was more chronological than not, but it had a thematic room devoted to Venus. The new install playfully revisits that, celebrating Venus in the Hall of Marbles. 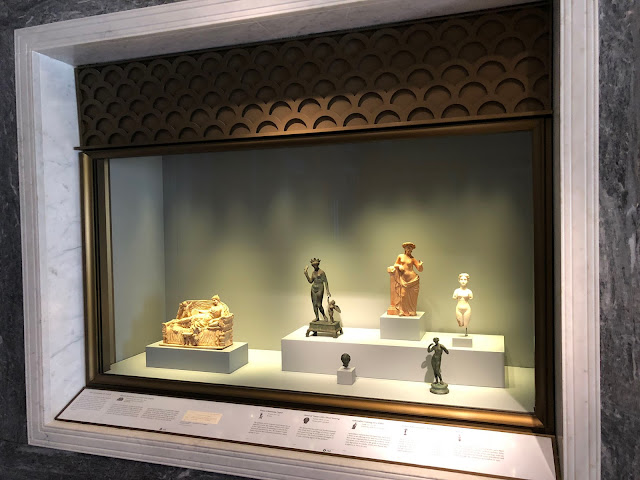 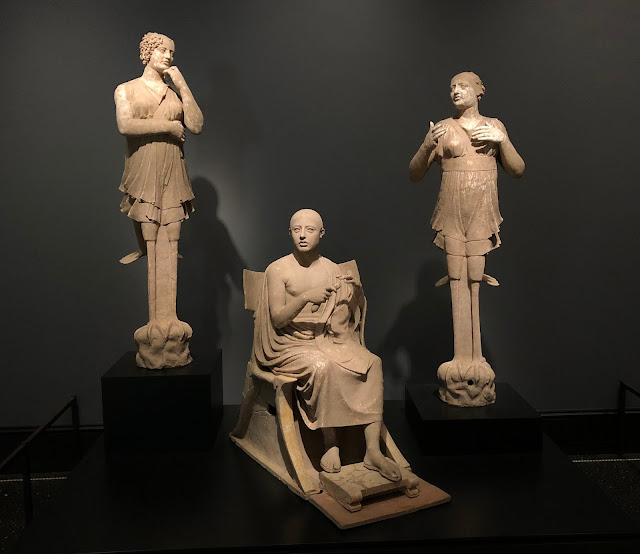 Greek Colonies in Southern Italy. Back to the chronology. This room features one of Getty's last and best purchases, the terra-cotta Seated Poet and Sirens (350-300 BC). Newly on view is a limestone Capital with a Double-Bodied Sphinx, 350-250 BC. 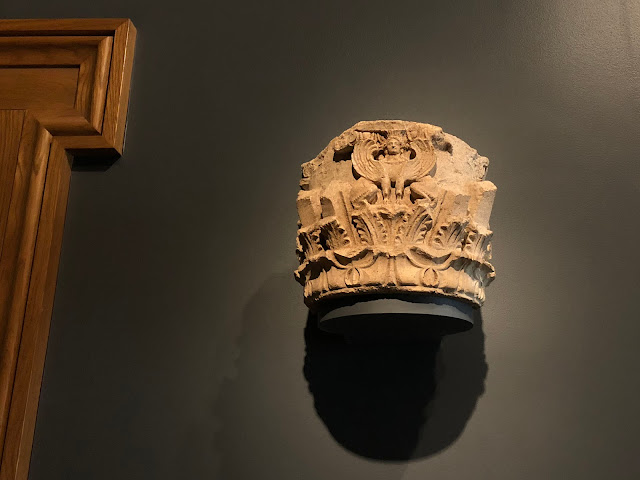 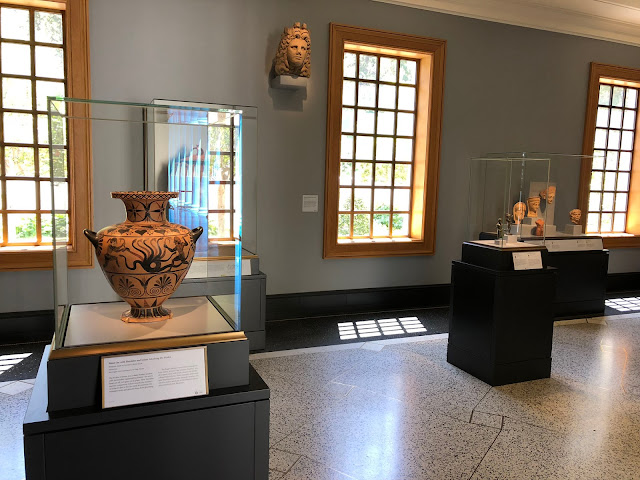 Etruria. The Etruscans, the culture that preceded Rome, are now revealed as a major component of the collection. Etruria occupies one of the most light-filled rooms, with three garden-view windows and a light slate-blue wall paint. 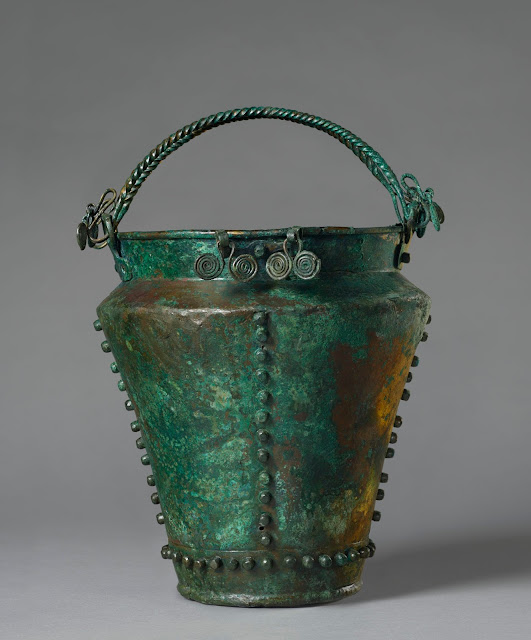 The chronology begins with something even more recherché than Etruria. A Two-Handled Bucket (750–700 BC) is assigned to the almost mythic Villanovan culture that preceded the Etrurians. 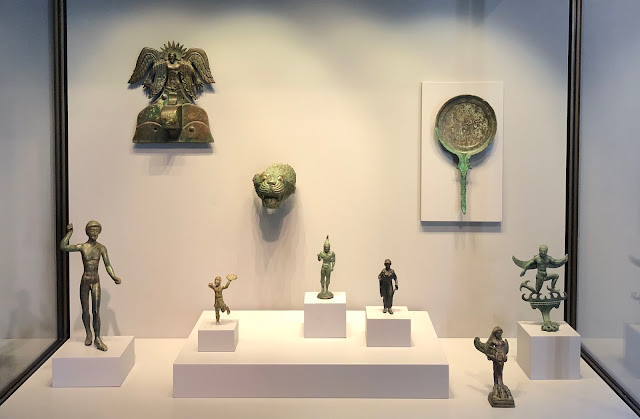 The newest Etruscan acquisition is a bronze plaque of the sun god Usil. It's shown (upper left) in a case with other small bronzes. The rightmost object is another remarkable Usil, running across the waves. 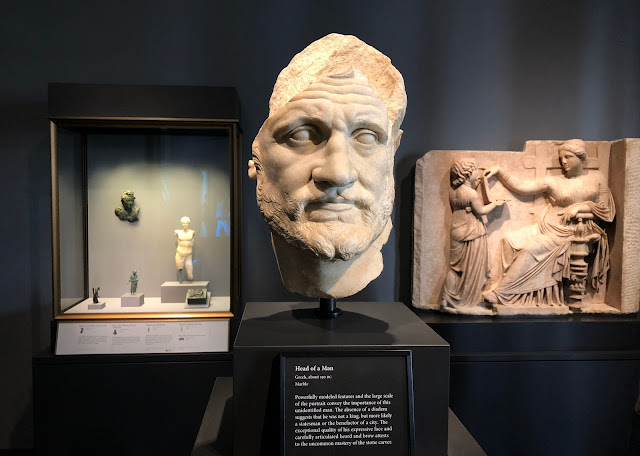 That includes the riveting portrait Head of a Man. And the Victorious Athlete's new home is a win-win for families. An updated Family Forum has been carved out of adjacent space not previously open to the public. 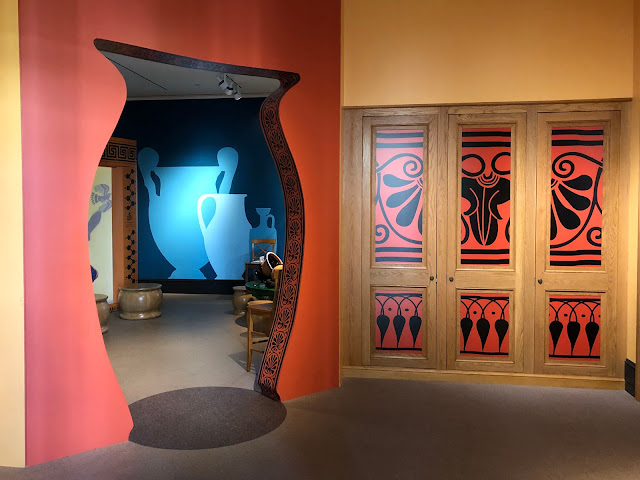 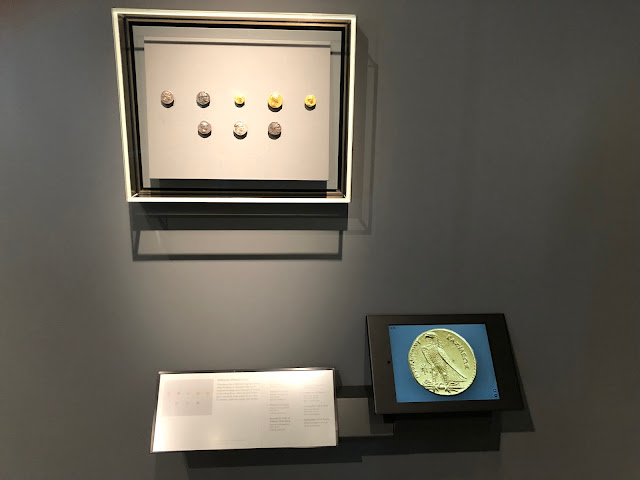 Coins and Gems. The Villa is exploring a new way to present carved gems and coins. These small objects are often of great quality and interest, yet few visitors notice them. Gems are especially hard to light, being translucent negative images. In the past they were often shown with paste impressions.

The Villa now shows coins and gems in flat cases, slightly angled for better lighting. Adjacent is a touchscreen that shows the objects much enlarged; plus an old-fashioned text panel. 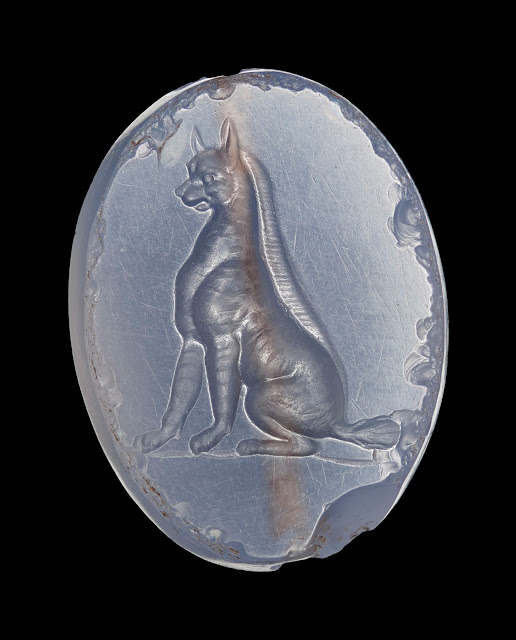 We spend much of the day looking at screens. Why do it in a museum, when the real thing is right there? Here's the piece that sold me, an Achaemenid Hyena in blue chalcedony, about one inch high. The carved image is barely legible in the gem. The touchscreen reveals it as a work rivaling much larger sculptures. 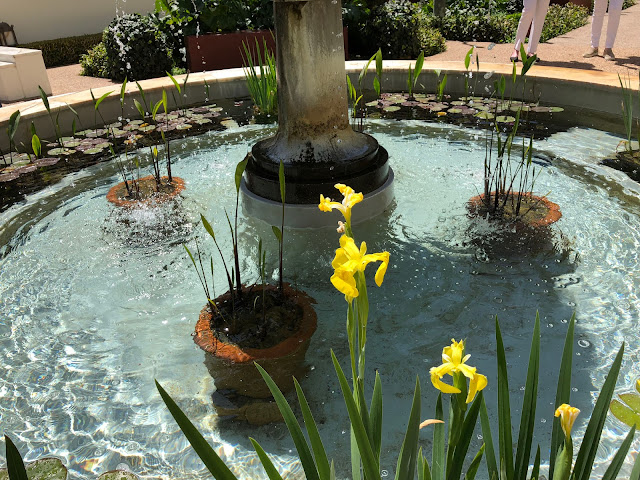 Gardens. Some of the Villa fountains were drained in solidarity to L.A.'s once and possibly eternal drought. All are now running. They have been painted a magical grey-violet shade of blue. 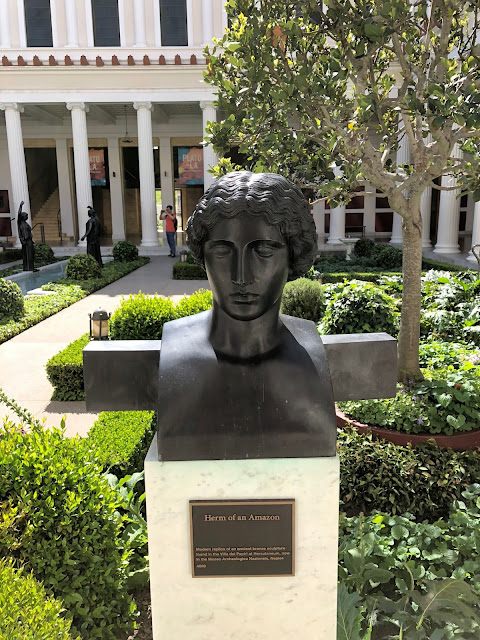 Many visitors pay as much attention to the gardens' bronze reproductions as to the authentic art inside. The garden statues now have labels more explicitly identifying them as a "modern replica of an ancient bronze sculpture found in the Villa dei Papiri." 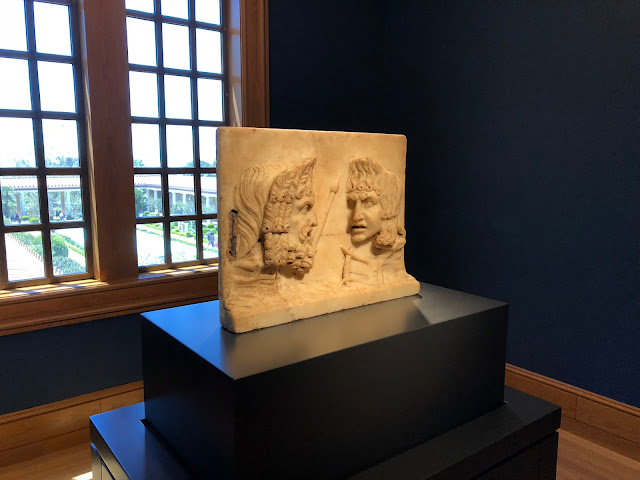 In Focus. Let's return to the top floor. The former Reading Room is now dedicated to focus installations of a single work. It opens with the Roman Theatrical Relief the museum acquired last year.

The Relief is barely 12 inches across. As perceptual engineering the installation works, causing visitors to linger more than the proverbial 15 seconds per museum object. 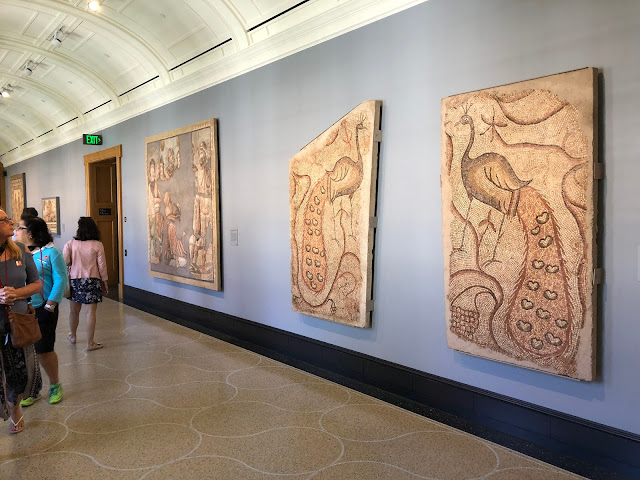 Mosaics. The second floor is showing some of the long-off-view mosaics that were featured in the Villa's "Roman Mosaics across the Empire." Above are two Peacocks from Syria, 400-600 AD. 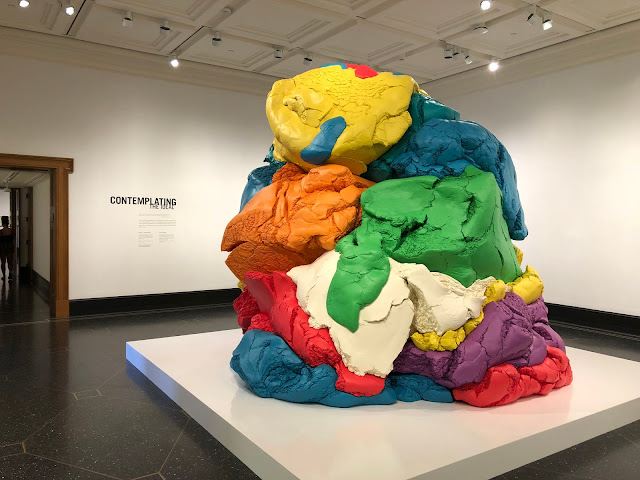 Mom: "Play-doh's on the second floor."

"Plato in L.A.: Contemporary Artists' Visions" has an expensive Jeff Koons and bad wordplay. The really successful room is the one that best embodies the show's title. It's works on paper related to Plato or philosophizing by L.A. school artists Mike Kelley, Paul McCarthy, and Raymond Pettibon. 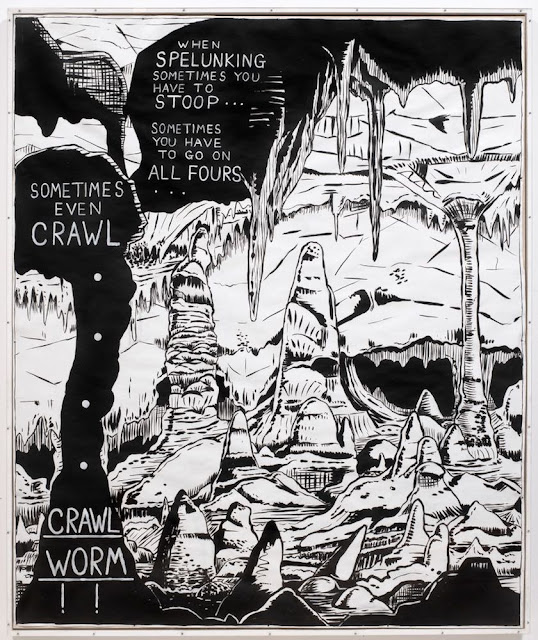