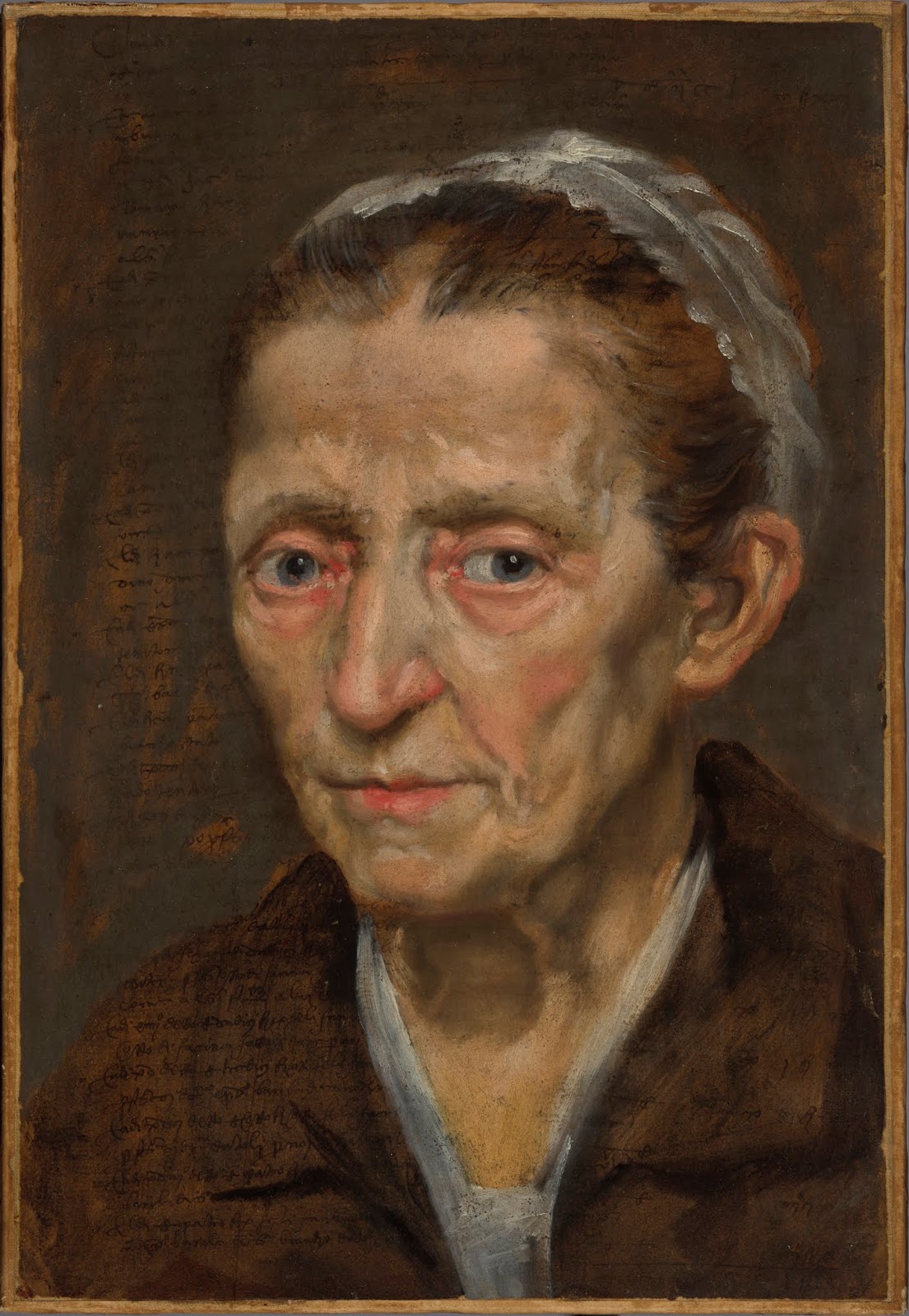 The Getty Museum has acquired Annibale Carracci's Head of an Old Woman (about 1582), an oil sketch on ledger paper. It's been rated the finest of the group of ledger paper studies from the early years of the Carracci Academy in Bologna. (Another was auctioned at Sotheby's in 2013.) Life studies such as this inaugurated the Baroque style.

Annibale, youngest and most radical of the Carracci family, must have been about 22 when he recorded the features of this unknown woman, without prettifying or stereotyping. The ledger writing is visible through much of the image and is incorporated into shadows and eyebrows. (Coincidentally, the Getty bought a Rubens oil sketch, also on ledger paper, two years ago.)

It is often hard to distinguish the work of Annibale Carracci from that of his older brother Agostino and cousin Ludovico. Several Carracci family drawings in the Getty collection have flipped attributions since their purchase. The Getty does not have a painting by Annibale, though this oil drawing exemplifies his revolutionary naturalism, a decade before Caravaggio.
Email Post
Labels: Annibale Carracci Getty Museum Ludovico Carracci

Anonymous said…
As much as I love hearing about new Getty acquisitions, the Getty still has a very mediocre art collection that is overshadowed by its buildings and gardens. Let's face it: Most of the great European Old Masters paintings are already in museums. The Getty should seriously considering branching out into another curatorial area like Latin American colonial art, Asian or American art. Museums have always focused on the history of art from a European perspective. It would be great if the Getty decided to focus on other parts of the world. It has the money for it.
April 23, 2019 at 8:29 AM

mughound said…
Very mediocre? You're joking, right? That sentiment might have been true in the 90s, but not today. Look at their acquisitions of the last 15 years. All of them really good purchases and/or are lacking in other US museum. I’ll give you that there are a lot of average art still displayed in galleries that dilute the collection, and makes it difficult to judge. But if going by their best holdings, it’s only a few great acquistions away from reaching Norton Simon level. They do not, however, have any famous paintings with the exception of Irises, but just because the Manet’s magnificent painting, Spring, gets no attention a few feet away isn’t a bad mark on the collection.

At the same time, few other museums are adding to their Old Masters collections as quickly as the Getty. The other curatorial areas you mentioned are best served by LACMA. It shouldn’t compete for it. I'd love to see the villa antiquities combined with the Center, but that’s not going to happen. The Getty does induce museum fatigue very quickly though. It needs more scupture.
April 23, 2019 at 11:04 AM

Anonymous said…
Is this the best the Getty can do ? Annibale Carracci is a great artist. This is hardly one of his best pictures. Disappointed.
April 23, 2019 at 1:51 PM

William Poundstone said…
This is a drawing, not a finished painting (nor the Farnese Ceiling!) But it has great charm of its own and is very well regarded among Annibale's drawings. If paintings are more your thing, I'm sure there will be more to come.
April 23, 2019 at 3:11 PM

Anonymous said…
The Getty's mediocre collection? Welcome to the club.

As for LA's other major art museum, it's now acting in a "who gives a damn?" way about its own not-exactly-mature collections. Downsizing, de-emphasizing, downplaying and scattering. But way more red ink in the process. And a lot more of a museum director's inflated ego and irresponsibility too.

Michael Govan is now doing to LACMA what Barry Munitz was doing to the Getty several years ago.
April 23, 2019 at 10:13 PM

Anonymous said…
@Mughound The Getty will never have a collection that rivals Norton Simon's art -- at least not in the field of pre-1900 European painting. Hence, why I'm suggesting that the museum branch out into a different area while there's still great paintings left unbought by other Western-focused museums.

@Anonymous (10:13PM): LA has always been about serving the ego of the rich and privileged at the expense of lower & middle-class taxpayers. Norton Simon, J. Paul Getty, Armand Hammer and Eli Broad could've easily given their art collections to an existing public institution, but their difficult egos led them to create private museums. As a result, LA's art scene is just as fragmented as the city itself. LACMA was our last great hope for a traditional encyclopedic museum that could be the West Coast's answer to The Met and Art Institute of Chicago, but Govan rather have another bullet-point on his resume.
April 24, 2019 at 8:30 AM

Anonymous said…
LA is somehow unique in regards to the affluent wanting more attention? What's the Fricks, Guggenheims, Morgans, Whitneys of a city like New York based upon?

If anything, when a person like Michael Govan, with the blessing of supposed public overseers (LA County), is going to trash the major taxpayer-supported art museum of Los Angeles, Simon, Hammer and Broad were wise to separate themselves years ago from LACMA.

What a waste. Sickening.