In an e-mail letter to LACMA members Director Michael Govan responds to criticism of the museum's downsized Peter Zumthor building. You can read the full letter here.

1. Revisiting a longtime talking point, Govan says that LACMA already has added a lot of square feet in a short time. "By the time the new building opens, we will have grown our total gallery space over the last decade by 70 percent from approximately 130,000 to 220,000 square feet… That's a huge leap in space; we're growing about as fast as we responsibly can."

2. The building will have seismic base isolation "to better protect people, artworks, and the building itself" in a major earthquake. It sounds like this was one factor raising the cost and motivating the smaller design.

3. Govan doubles down on satellites: "Our future expansion might best be pursued not on our Wilshire campus, but rather in the communities throughout Los Angeles where we intend to bring our our art collection to future satellite locations."

As to point #1, many American museums have come to grief by overexpanding. Not just Denver but the Met. It could happen here, even in L.A.'s burgeoning art scene. Museums must strike a balance between what they want and what they can afford.

In a previous post, I charted LACMA's total square footage over time. Govan speaks of gallery space, so I did a version of the chart showing just that (it's only from 1986 and it ignores the May Company property). In this chart the Zumthor project's shrinkage is somewhat less pronounced because the building will have a higher proportion of gallery space than those it replaces.

The main takeaway is that LACMA's exhibition space increased abruptly with the construction of BCAM and the Resnick Pavilion, opening just two years apart. It was assumed at the time that BCAM would hold the Broad collection. The Resnick was to address the need for more temporary exhibition space. LACMA as global kunsthalle has grown faster than LACMA as treasure house (holding the pre-1965-ish works intended for Zumthor's building).

UPDATE: Govan has an interview and op-ed defending the project in the Los Angeles Times. 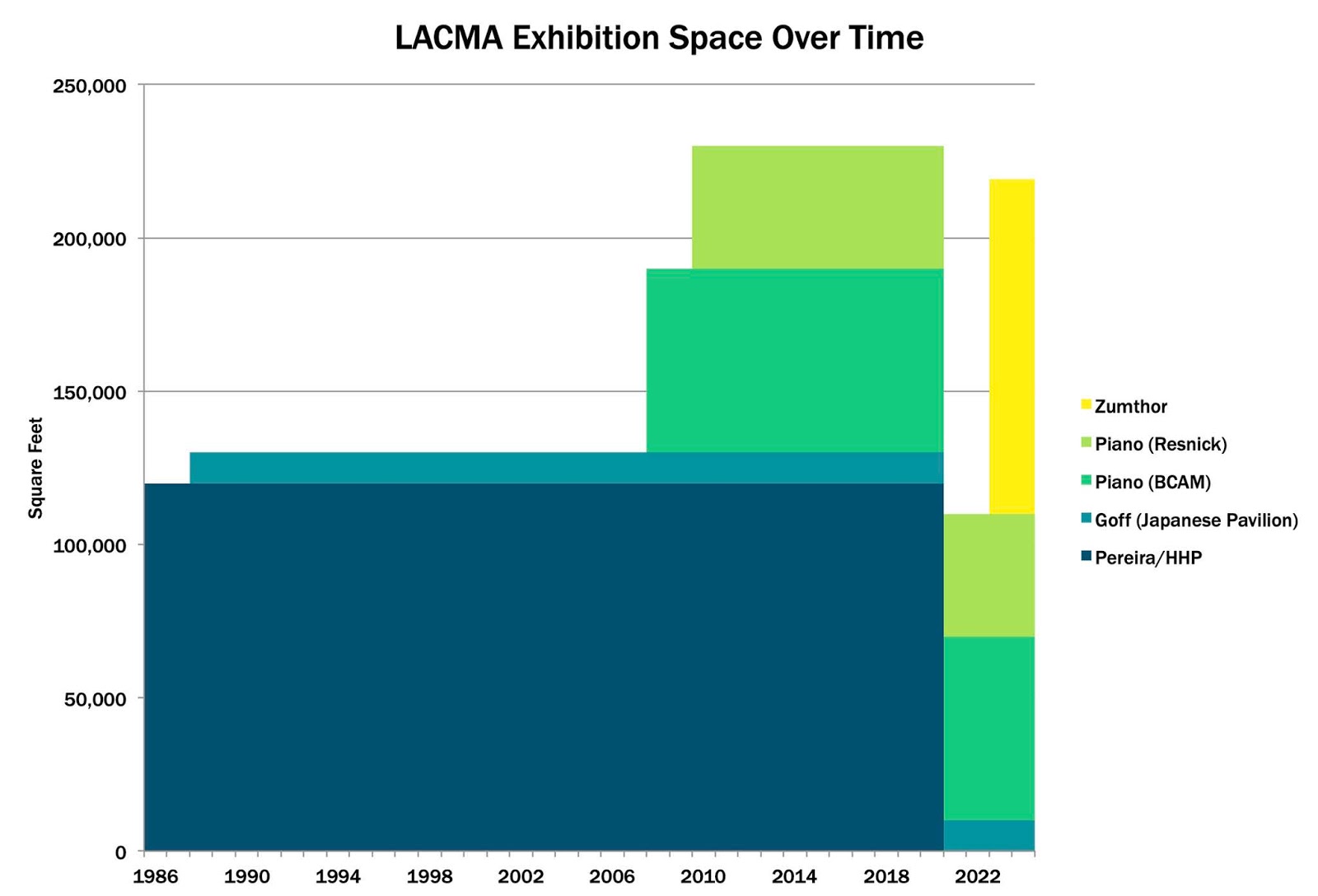 Govan comes off like a dilettante, like a person with his head in the clouds. He is purposefully or inadvertently now undermining the museum.

Has anyone mentioned that the replacement theater for the Bing will be apparently considerably smaller?

How is he going to deal with all the galleries that will have an outer wall of nothing but large windows? I guess canvases can be hung on, or in front of, glass or drapes?

He's going to bust the budget and will leave a financial fallout comparable to a LACMA version of Fukushima.

Govan, doesn't retirement to the south of France or Martha's Vineyard sound tempting right about now? Zumthor, don't you have other projects to be fussing over and worried about?

Anonymous said…
Why would you leave out May Co? Do you realize how big that was, that it was being used for offices and storage and events, and and that it could have been used to house a great many of the functions this Zumthor design leaves out? They sold it in a fire sale because the bond ratings were going to be lowered and they needed a quick infusion of cash. And now they're adding another $300M of county-sponsored bond debt to that as we head into a recession. A series of bad decisions got them here. And they'll have the most outstanding debt of any museum in the country.
April 9, 2019 at 4:26 PM