Zumthor Building Will Have 20 Actual Galleries (My Guess!) 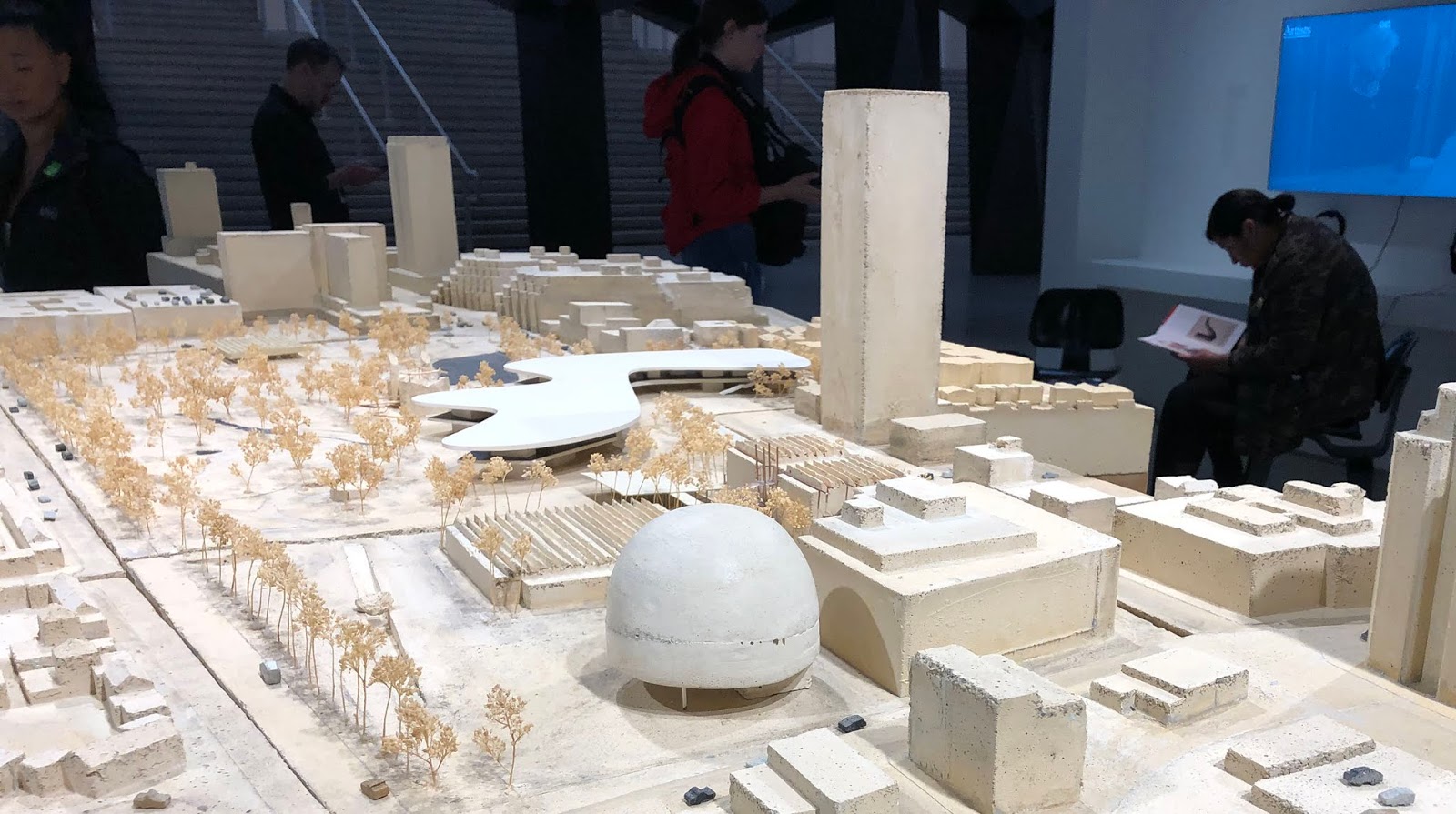 Are you any good at guessing the number of jellybeans in a jar? Then test your skills at LACMA. A new exhibition on the ground floor of the Ahmanson Building has an architectural model of Peter Zumthor's building for the permanent collection. Look closely and you can guesstimate what has never been publicly disclosed: the number of interior galleries. I counted about 13 on the curvier side and 7 on the other. I probably missed some and double-counted others, but put that down as my guess: 20 galleries.

For context, a very early (2013) model carved the interior space into over 150 galleries. 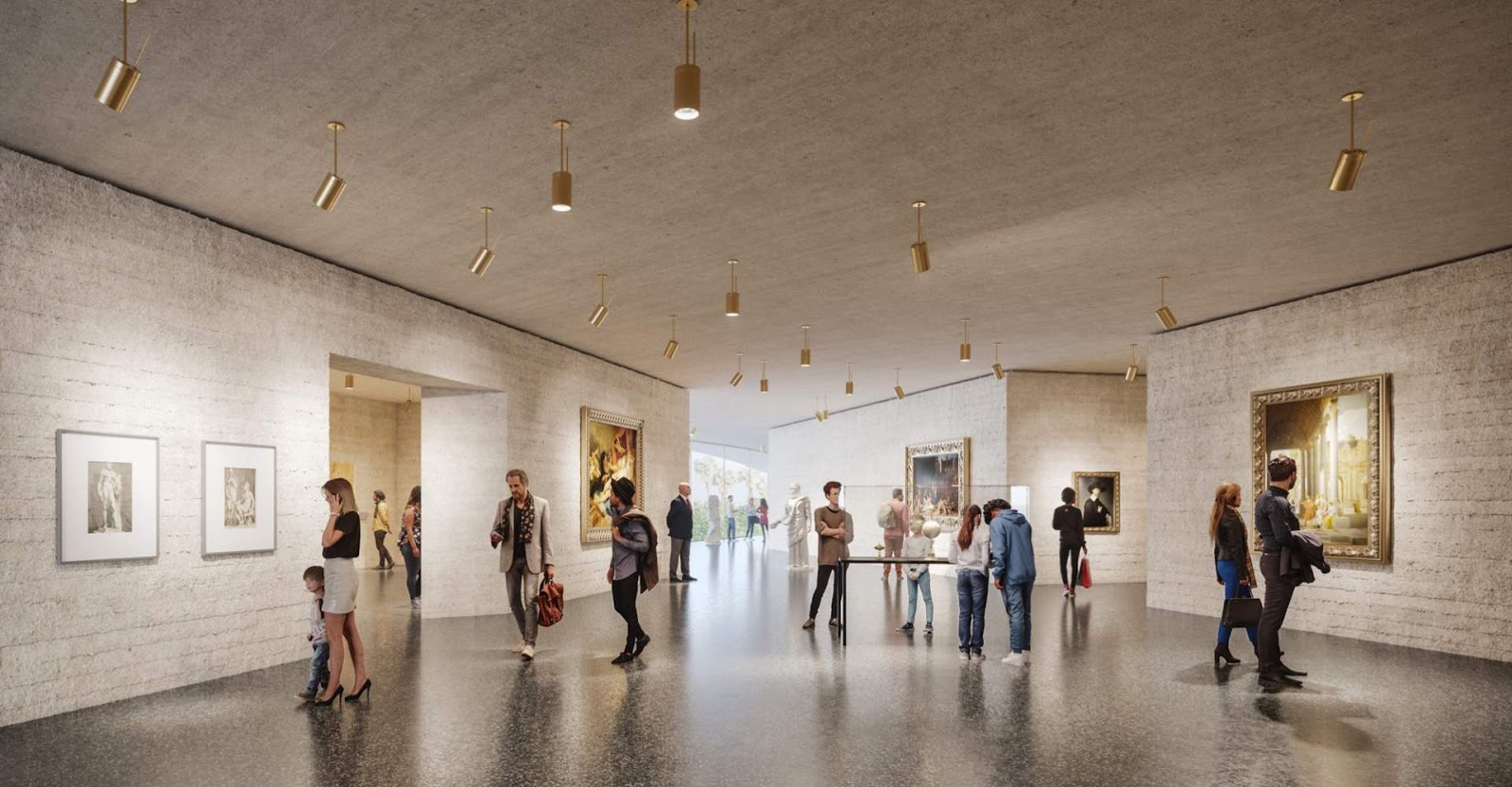 Zumthor now plans an airy layout of rectangular rooms scattered throughout the gallery floor's interior. Much of this interior space is open, offering glimpses of the glass perimeter. This space can hold art, such as free-standing sculptures and vitrines. The outsides of the rectangular rooms can also display paintings and prints. But without reading too much into the renderings, Zumthor and Govan are contemplating a relatively low density of installed art per square foot. This will, presumably, restrict the number of objects displayed more than the 10-percent haircut on square footage that has occasioned so much hand-wringing. 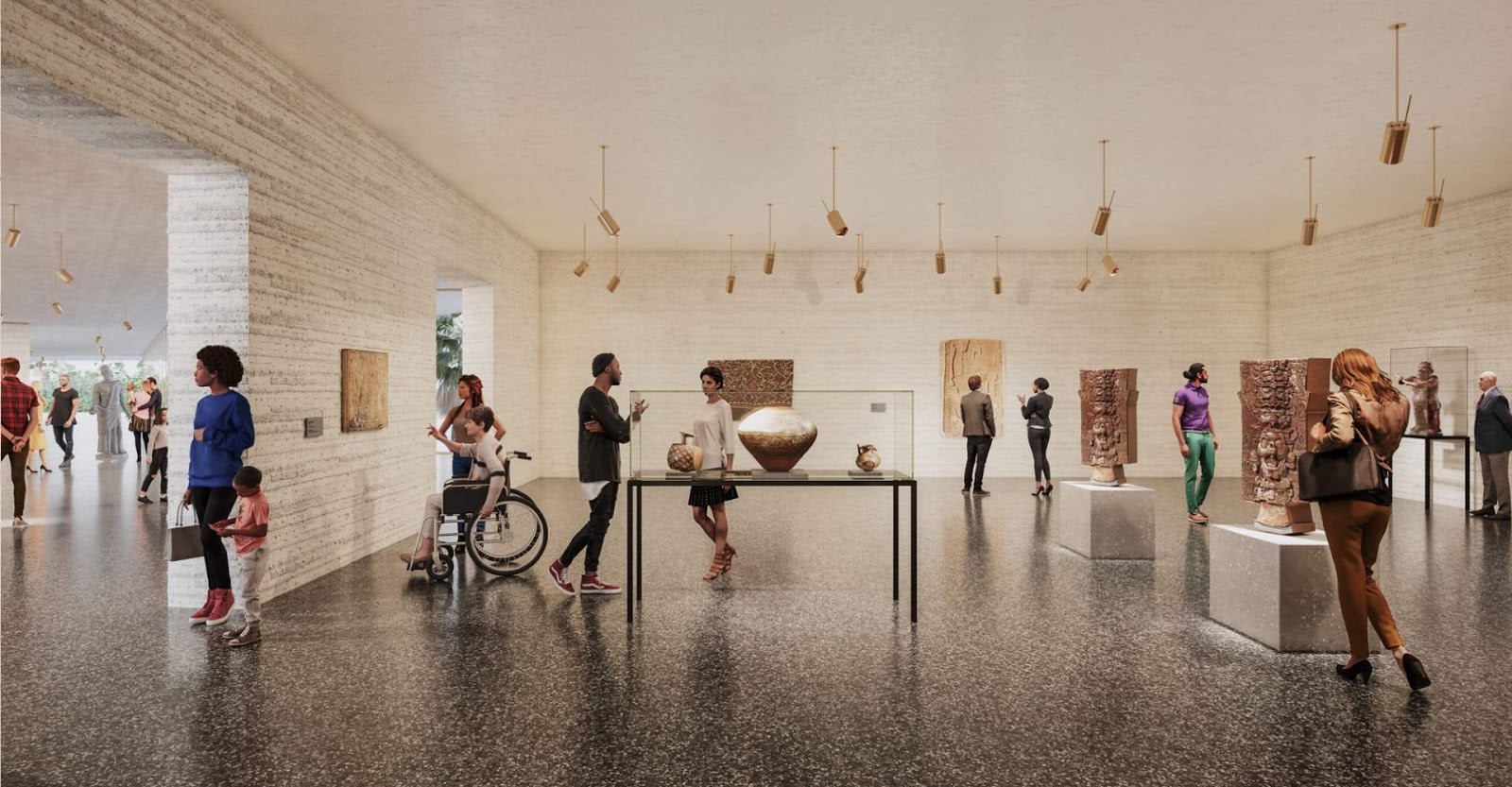 The twenty(?)-some enclosed galleries are the most flexible from a curator's perspective. They can be lighted as required for the works installed. I don't know whether Zumthor contemplates temporary walls within these rooms. If so, that could greatly increase the wall space for 2D art. But maybe not. Architects love their spaces.

Overall the Zumthor design appears to have relatively little wall space for 2D art; a lot of floorspace for 3D art that isn't too light-sensitive. The thing is, LACMA doesn't have huge numbers of stone and bronze statues, not like other big museums. LACMA has a larger-than-life Angkor Vishnu; five alabaster reliefs from Ashurnasirpal II's Nimrud palace; some Roman statues from the Hearst collection, and William Wetmore Story's Cleopatra. There are Rodin bronzes (posthumous) plus abstractions by Brancusi and Giacometti. A bronze Shiva as the Lord of Dance and a Bernini portrait bust rank among the museum's greatest objects. But the for most part LACMA's sculptures are smallish and need to be shown in glazed display cabinets that would be subject to glare from the perimeter windows.

The LACMA exhibition lays out the Govan/Zumthor philosophy as "a model for the art museum of the twenty-first century." In Govan's own words, the Zumthor building embodies a "shift in LACMA's curatorial strategy from fixed presentations to rotating exhibitions of the permanent collection."

Govan has been saying this for some time. I took him seriously but not literally. I mean, all "permanent" collection installations are temporary in the grand scheme of things, right? I also figured that, with enough space to work with, curators might manage to keep practically all of the greatest hits on view most of the time. Thus Eakins' Wrestlers would be on view, but it might not be in a room of turn-of-the-century American painting.

Rotating exhibitions of a museum's permanent collection aren't a new concept. It's how museums have always showed their light-sensitive art. The Japanese Pavilion, for instance, can't keep Okyo's Cranes or Hokusai's The Great Wave on permanent view, no matter how art-historically important or Instagram-friendly they are.

Oil paint is a Western invention. It puts a thumb on the scale of art history, even in Western museums that aspire to be global. The most famous pictures are oil, tempera, or acrylic, famous because encyclopedic museums can show them on a permanent basis. That future LACMA might challenge this convention, to a degree, is a provocative part of the Govan/Zumthor thesis. 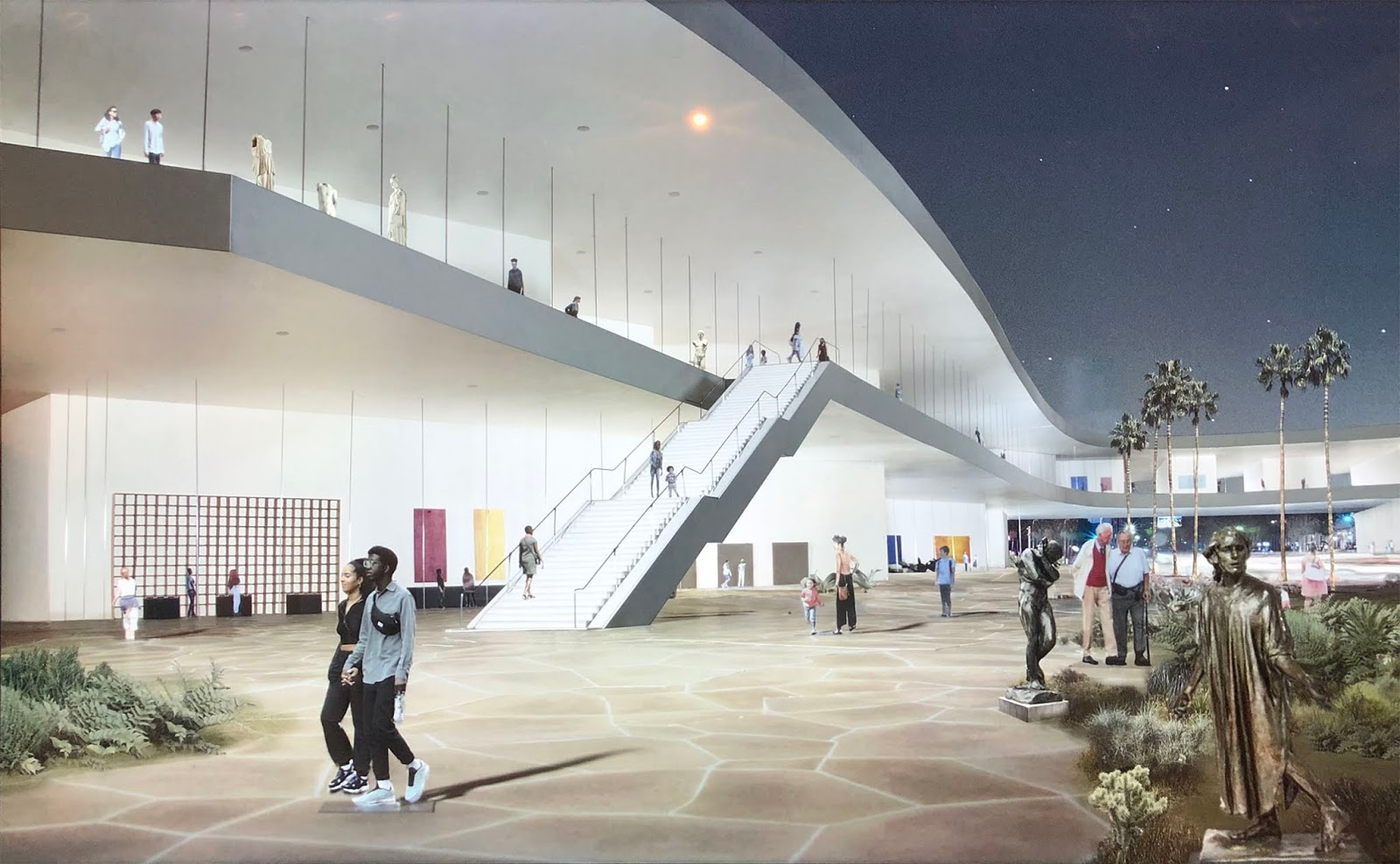 That said: There are logistic challenges to perpetual (re)installation. It takes both money and time to move art. Statues need to be on seismic bases that, by design, resist being moved. The Zumthor building is none too large as it is. How much of it will be cordoned for reinstallation at any given time?

LACMA's collection doesn't have the deep back bench that older encyclopedic museums do. The Metropolitan Museum has 16 Georgia O'Keeffe paintings. It doesn't show them at all once; it rotates them. That's great for New York, which also has prime O'Keeffes in Brooklyn. But LACMA owns exactly one O'Keeffe painting, and it's the only O'Keeffe in any L.A. museum collection. Whenever LACMA's O'Keeffe goes off view, our city misses an important part of the story of American modernism and indeed, of women artists. It's hard to put a positive spin on that.

Anonymous said…
The Govan/Zumthor plans are so harebrained and irresponsible, that it will now be better to lose the Jerry Perenchio collection entirely than to see this debacle go forward.

It's also not just a matter of overly small, limited exhibition spaces too. It's a matter of no adjoining areas for curators and conservation. It's an auditorium with reduced capacity---Anna Bing Arnold spinning in her grave?

It's a reorganization that merges departments and downplays attempts to have a fully displayed encyclopedic collection. (Howard Ahmanson spinning in his grave?) It's a museum that wants to be scattered all over LA County neighborhoods where perhaps 200 people will make an effort to visit a localized part of LACMA.

It's a case of a budget that will be stretched to the breaking point. Red ink galore. Not enough money for anything.

The addition of the Whitney's former Breuer building to the Metropolitan stressed out an institution with far more money. With LACMA, already described as the most indebted museum in the US, you ain't seen nothing yet.

Any person now wanting to donate artworks or monies - or both - to LACMA will be as foolish as Govan is.

Anonymous said…
Why does it seem like the only one who supports LACMA's new design is Michael Govan, celebrities and our out-of-touch leaders? Rigid design, less square footage, LOTS of harsh light, no room for further expansion: What is Govan and company smoking to actually think these are selling points??
May 2, 2019 at 8:16 AM

Anonymous said…
How is one suppose to hang art on these walls? Drill and leave a nice indelible mark?
May 2, 2019 at 7:07 PM

Anonymous said…
It's madness for a growing, encyclopedic museum like LACMA to downsize and deliberately put a large part of its collection in storage. How can anyone in a position of authority at the museum think this is a good idea? I was a member for over 20 years when I lived in southern California. I visited back in Oct and I'm glad I did. It will probably be the last time. LACMA had many outstanding collections, and to think they will never be displayed again in their entirety is a tragedy. What collector will want to donate their collection to the museum knowing there is absolutely no space for it, and most of it will be permanently in storage?

LACMA is not some small, boutique museum, collecting in only limited areas. It needs a design/complex that can grow as the collection grows. This is the end of any growth for the museum. It will be forever frozen in time, like an insect trapped in amber. The current Pereira buildings have never been loved, but they are looking better and better compared to this misguided endeavor. For $600 million, I'm sure they could be totally redesigned, improved, and enlarged.
May 24, 2019 at 10:18 AM