The Cheech Marin Center for Chicano Art & Culture opened this past Saturday in Riverside. Some first reactions— 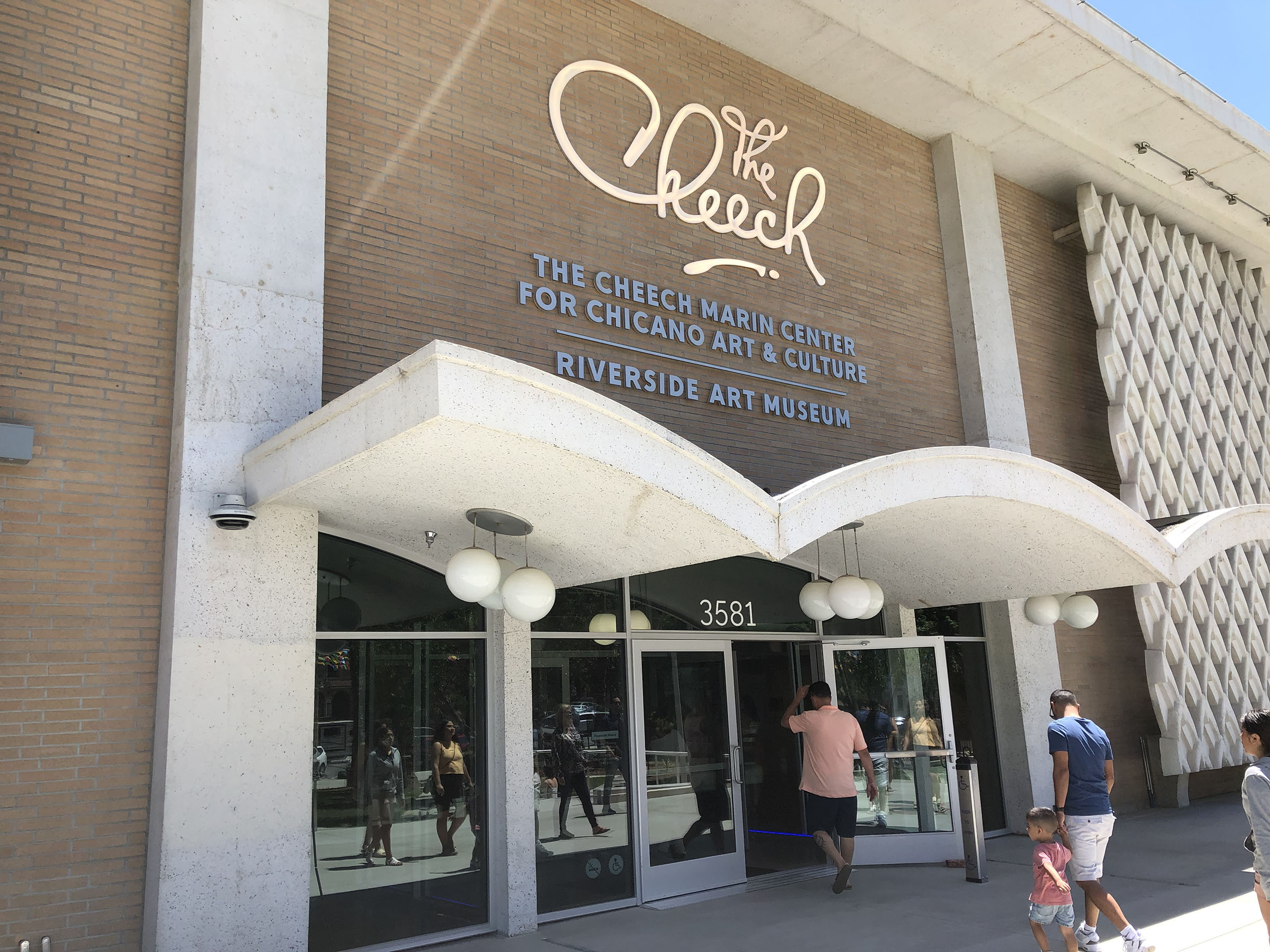 The Building. I liked the building a lot better than I'd expected from the renderings. The two-story structure was Riverside's 1964 public library, designed by Moise, Harbach, and Hewlett, a local firm whose renown did not extend much beyond the Inland Empire. Think of the library as a road show version of Edward Durell Stone. The building has now been converted to a museum by Page & Turnbull, San Francisco specialists in historic preservation, and the very of-the-moment Kulapat Yantrasast of WHY. The architects have not attempted to make the building look brand-new. The exterior's lacy decoration retains six decades of earthquake cracks and has not been sandblasted white. The jazzy color of early renderings has been eliminated, but guess what? Cheech's signature on the facade lights up like neon. It's kept on even in the daytime.

Moise, Harbach, and Hewlett conceived the decoration's repeating elements as doves—a peace symbol for a Cold War era building.
Told that the building was 61,420 square feet, Marin joked that the last three digits were stoner kismet. The interior has been reconfigured to a reported 16,420 sf of exhibition space. The ground floor is for rotations of the Marin collection; the second floor is for temporary shows. Some of the paintings are shown on brick walls, a coffee house vibe that has a certain charm. (Zumthor-LACMA will hang paintings on concrete. Does anyone care about making life easier for installers?)
The central atrium holds the de la Torre brothers' Gaiatlicue, the two-story lenticular monolith. Commissioned for the Cheech, this is to be a permanent feature. Meanwhile the de la Torres inaugurate the second-floor space with "Collidoscope: de la Torre Brothers Retro-Perspective" (through Jan. 22, 2023), a show that will tour nationally. 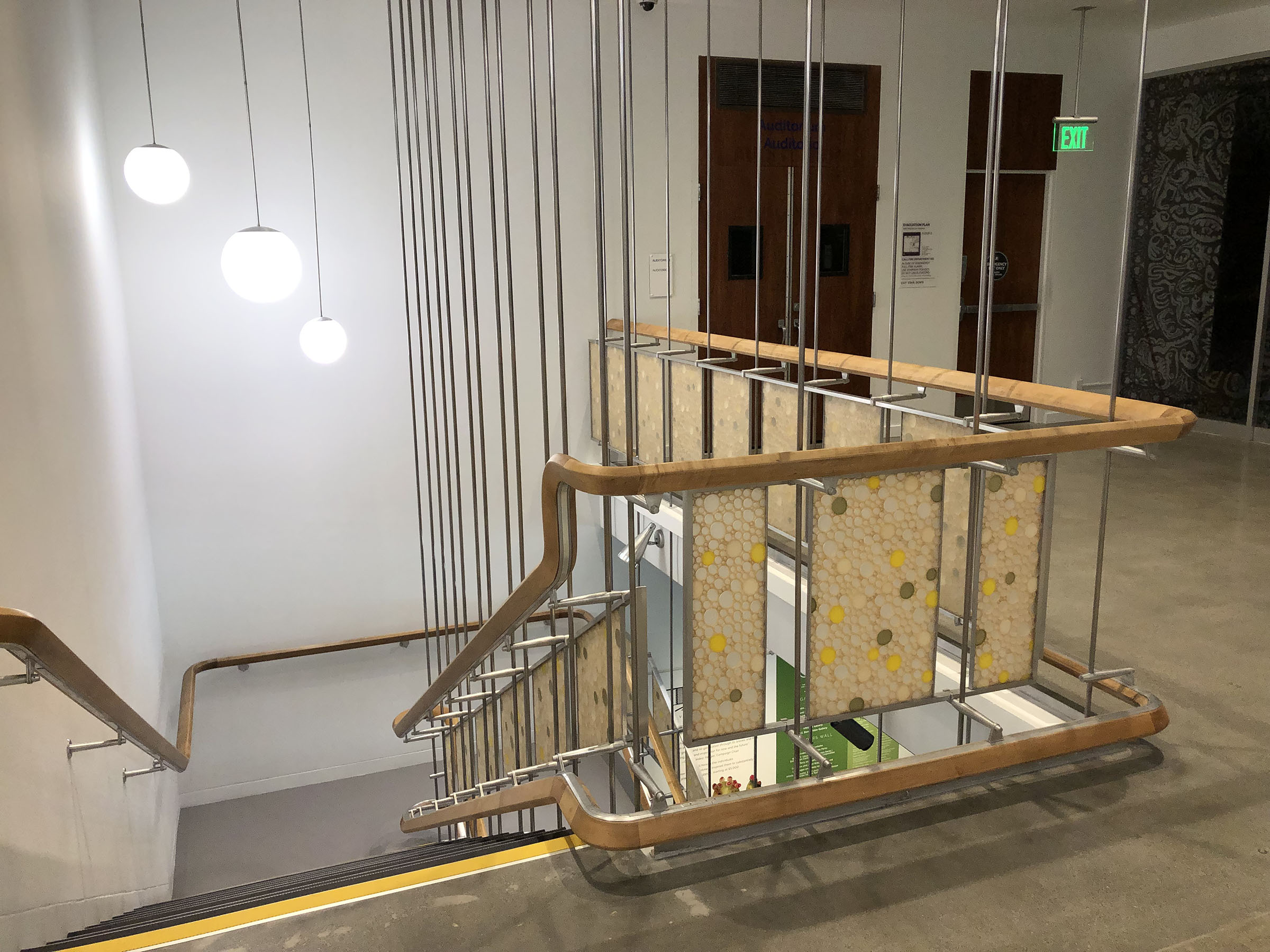 My favorite part of the building is the staircase. Damaged polyester panels, rails, and lighting fixtures have been replicated in mid-century splendor. 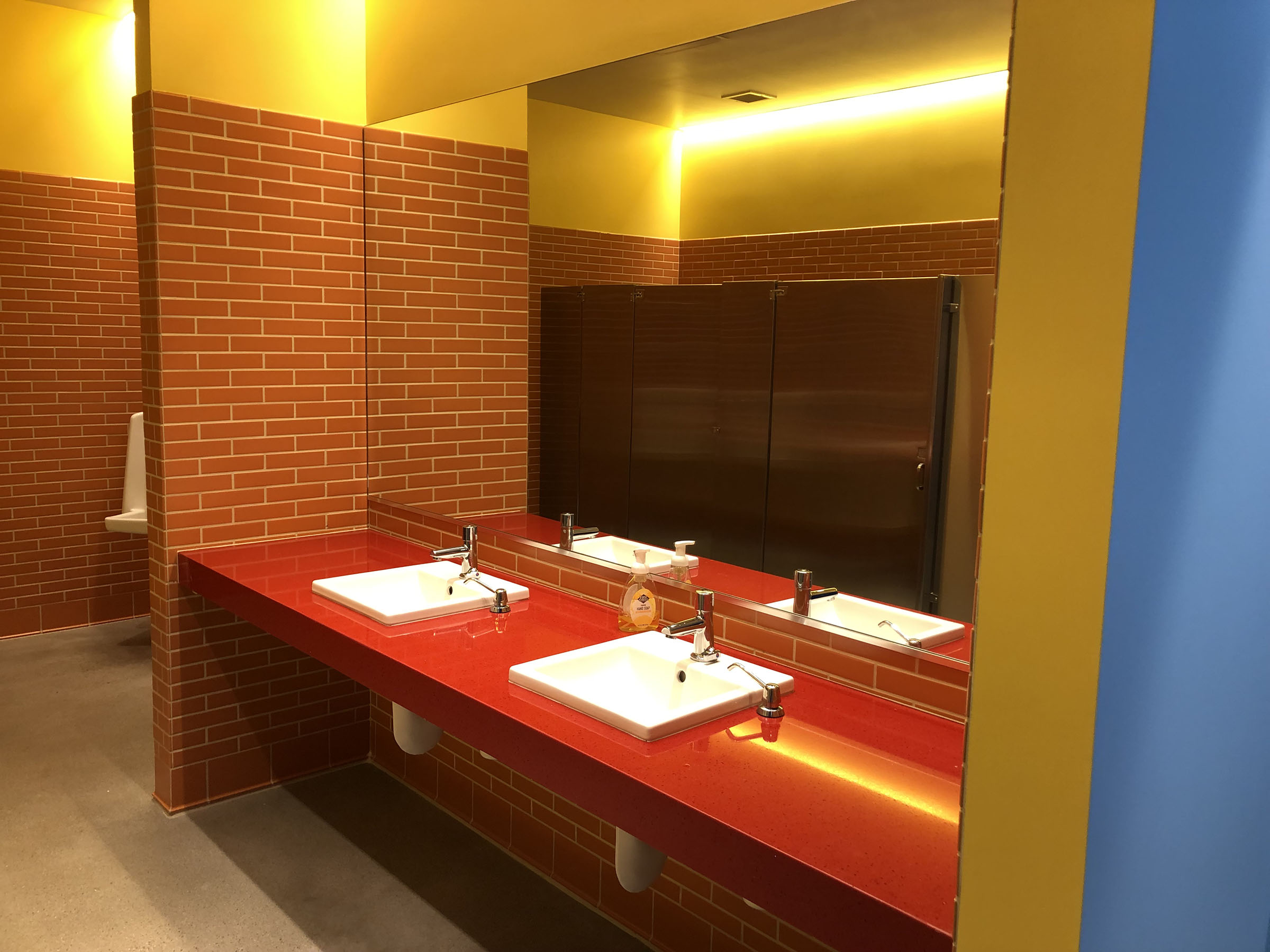 Even rest rooms send messages about who a museum's audience is. The example here suggest a theme park's upscale restaurant—apparently a gesture to welcome first-time museum visitors.
The Collection. Marin began collecting in the mid 1980s. His collection ranges up to the present day, spanning political art, street art, portraiture, folklore, and landscape. In general he likes technically accomplished and stridently colorful objects with a clear link to Chicano life. Marin acquires multiple first-rate works by artists he likes, such as Carlos Almaraz, Chaz Bojorquez, Margaret Garcia, Gronk, Judithe Hernández, Gilbert “Magú" Luján, Sandy Rodriguez, Frank Romero, John Valadez, and Patssi Valdez. In that respect, the Cheech is the Chicano Broad, or even more so: The Cheech probably has a higher proportion of quintessential pieces than the Broad does. Eli was competing with every other gazillionaire; Cheech was ahead of the market and institutional curve (the Chicano Albert Barnes?)
The art is indeed staying here, for Marin has donated about 550 pieces (out of a still-growing total of about 700 works). The donation includes almost all of the most important pieces in the first rotation, "Cheech Collects" (through June 18, 2023).
Eli Broad was faulted for following the market, art fairs, trends, and gatekeepers. Based on "Cheech Collects," Marin doesn't have that problem. That is both good and bad.
I'd divide "Cheech Collects" into three parts. One consists of first-rate pieces by recognized artists. Another is great pieces by artists who are not so well known. Among them I would include the luminous paintings of architecture by Jacinto Guevara, a grisaille of the L.A. skyline by Roberto Gutiérrez, and the Hopper-esque nocturnes of Joe Peña. Each makes me want to see more by the artist.
The third phase of the collection is what you might call populist art—ranging (IMHO) from dull to outright bad. Marin told the L.A. Times that his favorite painting in the collection is Wayne Alaniz Healy's Una Trade en Meoqui ("An Afternoon in Meoqui"), a work he described as "Norman Rockwell with jalapeños." The Chicano Broad is also the Chicano Lucas. It's like seeing Matisses hanging next to Margaret Keane and Beeple. (Or Donatello among the Lechuzas.)
The First Chicano Museum. The Cheech is being billed as the first museum of Chicano art and culture. As far as I can tell, that's true, though the distinction is somewhat narrow. San Francisco's Mexican Museum (founded 1975) and Long Beach's Museum of Latin American Art (founded 1996) were originally conceived to show art made south of the Rio Grande, but both now show Chicano art as well. Chicago's National Museum of Mexican Art (est. 1982) calls itself the nation's largest Latino cultural institution.
The Cheech's only real rival is the Smithsonian's National Museum of the American Latino, authorized by Congress in 2020 but still a long way from opening. In any case, it's on the other side of the country and not specifically focused on the Mexican-American experience. The nascent Smithsonian museum collaborated with the Cheech on the de la Torre brothers show.
The Cheech is being run as a branch of the Riverside Art Museum (which is just across the street). In this case the tail is wagging the dog. RAM never assembled much of a collection, and its exhibitions are fairly low-wattage. Right out of the gate, the Cheech has a collection and mission of national importance. It's projected that the Cheech will draw about 100,000 visitors a year, about twice that of the RAM. 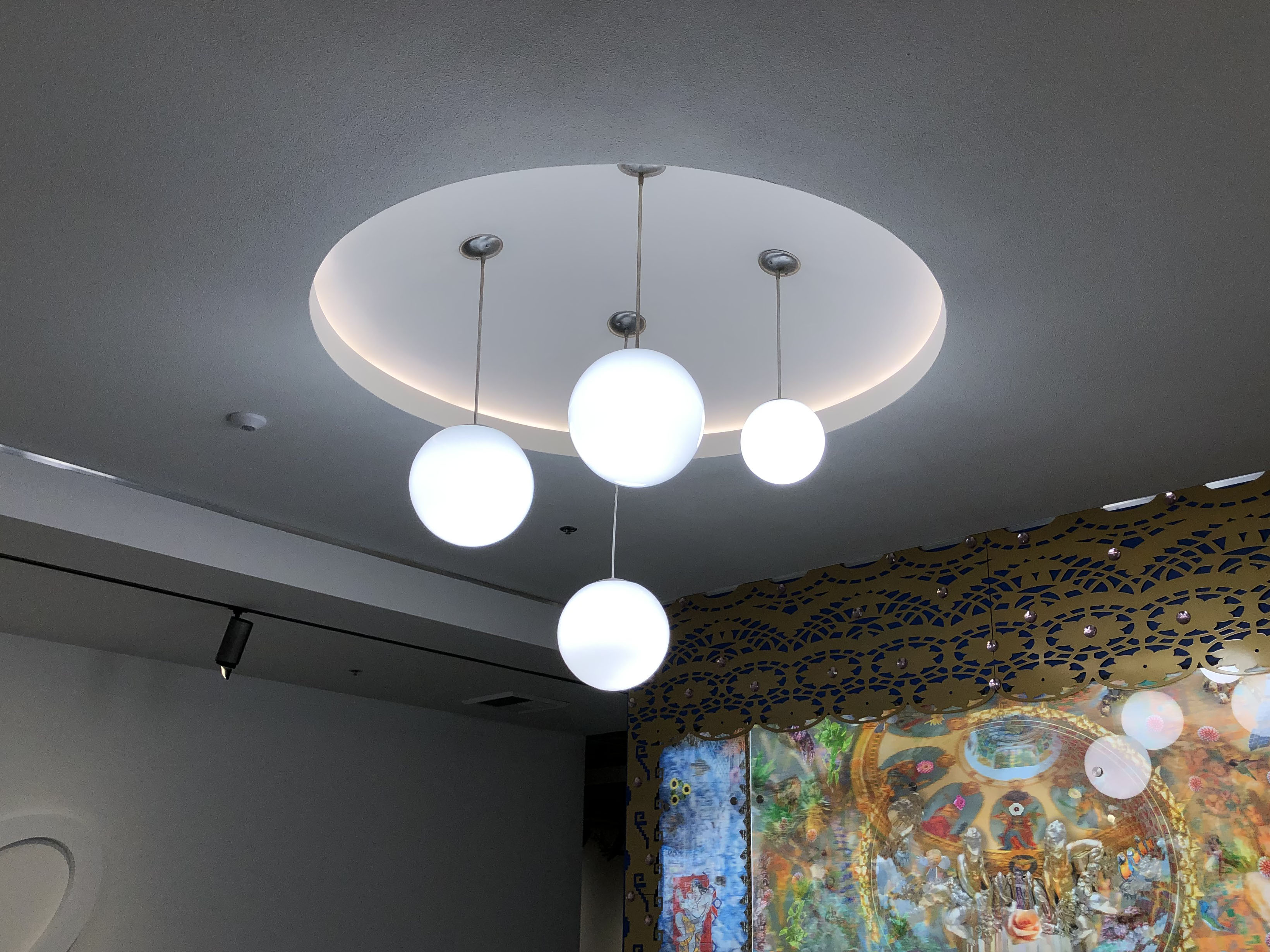 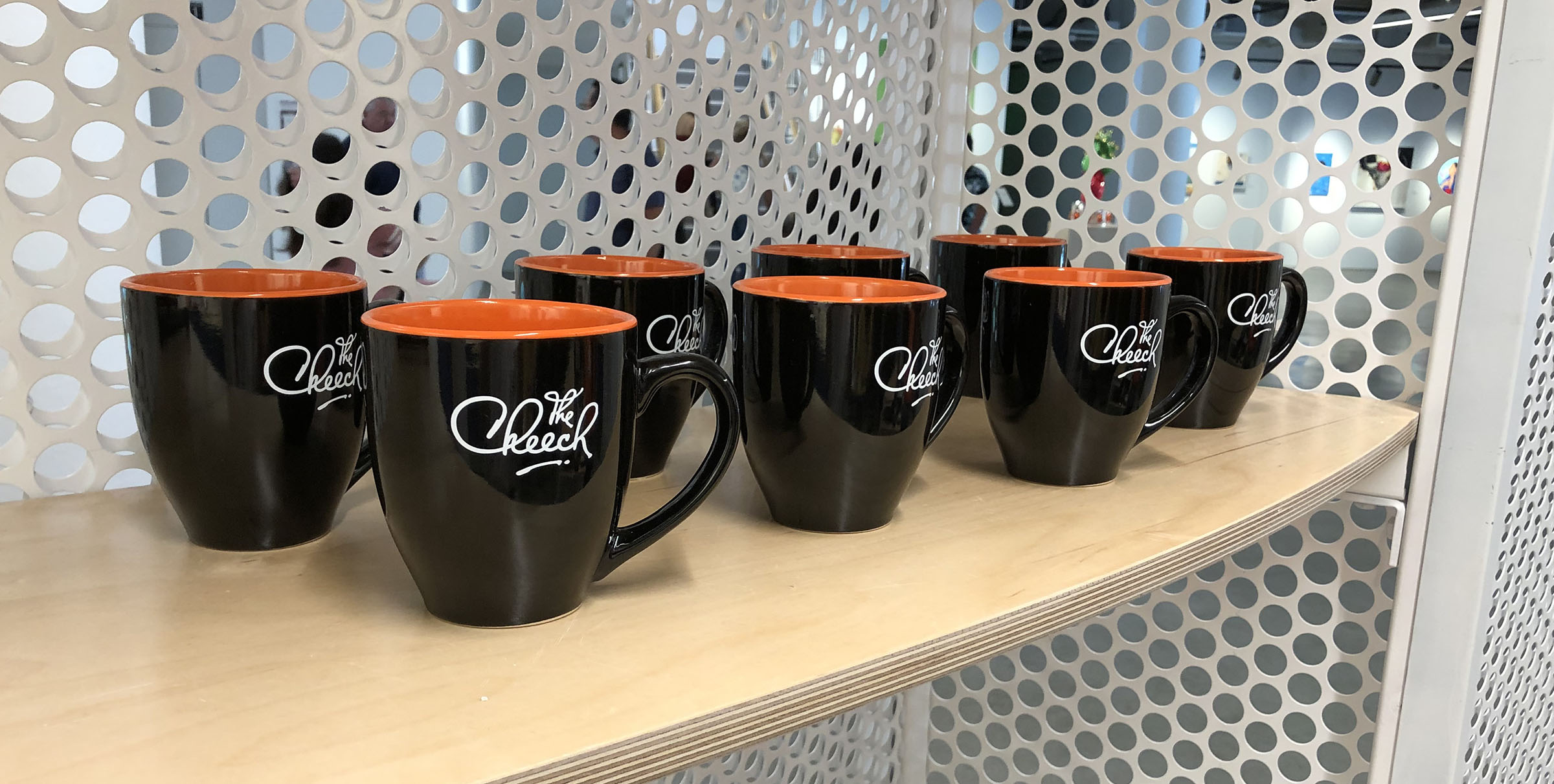 The gatekeepers of arts and culture really do determine who's up, who's down, who's celebrated, who's ignored, what's admired, what's dismissed.

With the fine arts becoming more and more politicized, and so-called good taste or preferred aesthetics increasingly being judged as "altogether in the eye of the beholder," who knows what is lurking ahead?

After visiting the Louvre Museum - arguably the greatest and most attended one in the world - I found it so crammed with art, much of it from "dead white males" and so-called arrogant imperialists, that after awhile it actually gave off sort of an unpleasant or overbearing quality. It's similar to a woman who thinks because a little perfume smells good, a lot of it on herself will be even better.

I couldn't appreciate a lot of what was on display because there was just too much of it, it was so visually busy and it was technically very gaudy. It was very impressive, however, but overbearing in a Gallic sort of way.

Ted Gallagher NYC said…
Re the Louvre: Not a lot one can do about the dead-white-males bit. The future is female?
But I take the Louvre dauntlessly by going daily when I stay in Paris, and I don't arrive before 3P. The hordes and the paparazzi by then have largely fled, so one isn't in fear of being mugged.
That leaves earlier for Sainte-Chapelle (the world's most beautiful building); Guimet; the Decorative Arts Museum; Pompidou; d'Orsay; Place des Vosges, so on and etc.
Afternoon power naps are de rigeur.
Enjoy your time.
June 20, 2022 at 4:13 PM

Anonymous said…
> Not a lot one can do about the dead-white-males bit.

That was an allusion to arts and culture becoming "more and more politicized." It's affecting not just museums and the visual arts, it's increasingly affecting everything.

People should study what happened over 50 years ago in China to understand what happens when another form of identity politics took hold of and paralyzed a society. It wasn't a pretty picture.
June 20, 2022 at 5:05 PM

Anonymous said…
^^^Art was always political. More so in the past than it is today. See the Met's recent exhibition on Jacques-Louis David.

It'a not inherently "political" today because capitalism refunctioned the relation between society and art. See Adorno.

What you are seeing today is more and more of an effort (by both museums and artists) to restore the link between art and society.

Anonymous said…
>The Chicano Broad is also the Chicano Lucas. It's like seeing Matisses hanging next >to Margaret Keane and Beeple. (Or Donatello among the Lechuzas.)

I would like to see what hangs on Poundstone's walls.

Collecting art is not easy.

What great discoveries has Poundstone made? At least Cheech is taking a chance by supporting artists even when their greatness is not a given.

In which case, if Cheech wants to hang a "Healy" next to a "Matisse" he deserves the same respect and consideration that Barnes gets for showing Matisse next to some bric-a-brac.
June 21, 2022 at 7:04 PM

Anonymous said…
> It's stupid to think we are on a slippery
> slope toward communism.

'The aim of the Law for the Protection of
Animals was - as the preamble stated -
"to waken and strengthen compassion as
one of the highest moral values of the
German people."'

A lot of people in the field of high arts and world of culture in general love to think they're the height of [quote] compassion [unquote]. Correct?
June 21, 2022 at 11:49 PM