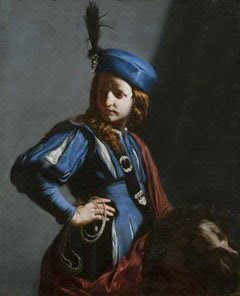 The Getty will debut a new painting acquisition, Guido Cagnacci's David with the Head of Goliath, in its "Captured Emotions" show through the remainder of its run (to May 3). Cagnacci was born in Rimini and had a peripatetic career that included apprenticeships with Guercino and perhaps Ludovico Carracci. The new Getty painting is similar to a Kress Collection picture of identical subject and model, now in the Columbia (South Carolina) Museum of Art. The Kress version shows a more typical, half-clothed David, in contrast to the Baroque finery of the Getty painting. The Columbia museum website accepts its David as a Cagnacci, while the Kress website labels it "attributed to." 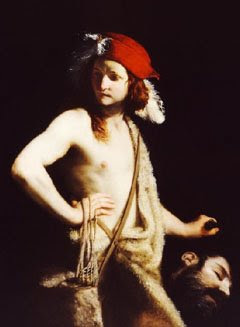 Both David's show a quieter mood than in Cagnacci's scenery-chewing Martha Rebuking Mary for her Vanity, one of Norton Simon's last acquisitions for his Pasadena museum.
Email Post
Labels: Getty Museum Guido Cagnacci