Chimeras, Griffins, and Bears (Oh, My!) 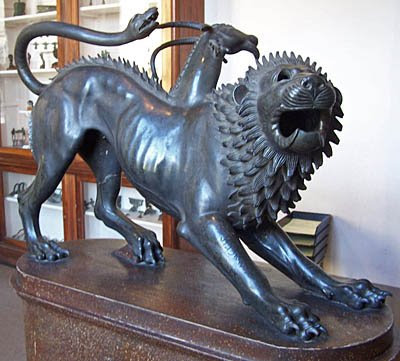 The Getty Villa and the Museo Archeologico Nazionale di Firenze have announced a long-term collaboration in which the Chimaera of Arezzo, a textbook Etruscan bronze, will be shown in Malibu from July 16, 2009, through February 8, 2010. Future Villa shows on ancient bronzes and Etruscan art are also planned, no dates announced.
The Chimaera will be the first major antiquity loan from Italy since the Getty came to terms with the Italian cultural ministry over looted objects in its antiquities collection. That agreement, announced in August 2007, called for the Getty to return 40 objects and for Italy to lend works "of comparable visual beauty and historical importance." This paralleled deals struck with the Metropolitan Museum and other American institutions. There was talk of extending Italy's legal limit on the term of artwork loans, implying that the Italian pieces would more or less replace the restituted ones in the galleries of sticky-fingered American institutions.
After the fanfare, things got quiet. The Getty returned most of the objects, leaving Isabella Stewart Gardner-esque blanks in its display cases. Months passed, and no loans were forthcoming. A cynic might have wondered whether Italy was going to come through. Any such qualms were silenced after Italy lent generously to last summer's Bernini show—at the Getty Center, of course, not the Villa. Italy lent several important vases to the Met, which displays them near where the Euphronios Krater once stood. Where were the Getty's loans? 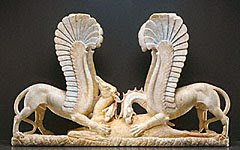 The answer seems to be that the Getty people were thinking big (and short-term). The "life-size" Arezzo Chimaera is a stunner. Though it vaguely recalls the marble Griffins Attacking a Fallen Doe the Getty returned, it is even more important and better preserved. (The Griffins supported a lost tabletop; the Chimaera is an essentially complete sculpture.) The bronze will be shown for seven months in Malibu as part of an exhibition, with loans from other institutions, that "explores the myth of Bellerophon and the Chimaera over six centuries of classical art." Okay, that may not extend scholarship too much. It still promises to be the one truly can't-miss show the Villa has mounted so far.
The Chimaera's home, the Museo Archeologico Nazionale di Firenze, is off the usual tourist track. Americans go to Florence for the Uffizi's Renaissance art, and Rome for antiquities. As the photo above shows, the Museo Archeologico's installation is pretty basic. The Getty will doubtless find a way to display it without somebody's outbox behind it.

There's no question that short-term exhibitions of first-rate pieces are better than long-term loans of second-rate works. The only catch is the cost: Short-term exhibitions cost more. Not so long ago, that wouldn't have been an issue with the Getty. Now it is. The Getty Trust recently announced that its endowment had fallen from a 2007 peak of $6.4 billion to $4.5 billion at the end of 2008. Not said was where it stands now (the S&P is down another 10 percent this year.) In response Trust president James Wood announced a 25 percent cutback in the Getty's operating budget for the coming fiscal year. That will almost certainly entail steep cutbacks in the size and number of loan exhibitions. (Pictured: detail of William Holbrook Beard's The Bears of Wall Street Celebrating a Drop in the Stock Market.)
Email Post
Labels: Chimaera of Arezzo Getty Museum Museo Archeologico Nazionale di Firenze