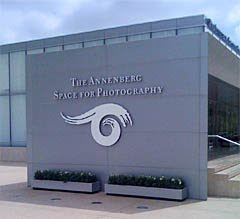 The Annenberg Space for Photography debuted last week with "L8s Ang3les," a show of 11 photographers active in LA. The line-up is pointedly inclusive, juxtaposing art-world stars John Baldessari and Catherine Opie with news, celebrity, and architectural photographers. Judged by usual standards, the show is underpowered, overfamiliar, and kind of dumb. But the memorable thing isn't the selection of images. It's the ginormous flat-screen TVs.
The Annenberg makes an impressive case for a new way to experience photography, a way a lot more like watching television. In the darkened central space, visitors sink into chairs or seats and watch one of two continuously looping, 20-minutes slide shows of photos on cinema-sized flatscreens. Technically, they were the best flatscreen monitors I've ever seen. Both the color fidelity and the resolution are amazing, 4000 pixels across according to one helpful and apparently well-informed staffer. Even in our age of big color photographs, this was impressive. It's hard to argue that much of the artist's vision was missing in these digital simulacra. (All the more so when dealing with photographers whose work was made for reproduction and is not scale-specific.) Tim Street-Porter's color-saturated photos of Los Angeles, for one, had a power on the big screen that I'd never felt when seeing the prints or the magazine reproductions. I had a great Catherine Opie moment with her ice-fishing shacks (a series that always puzzled me before). On the big screen, it sung.
For the record, the Annenberg also shows framed prints. The contrast is not favorable. You look at the print and say, "oh, yeah, we saw that in the video, and it looked better there."
The Annenberg has smaller video screens throughout, even in the restrooms. Elsewhere, two tabletop touchscreens let you flick, pinch, and zoom photos. It's like an iPhone, only more versatile and less user-friendly. (An attendant had to explain the interface to just about everyone.) One room has short videos of the artists commenting on their work. Conspicuously missing: video art. Obviously, moving pictures could play on the big screens just as well as slide shows of still images. 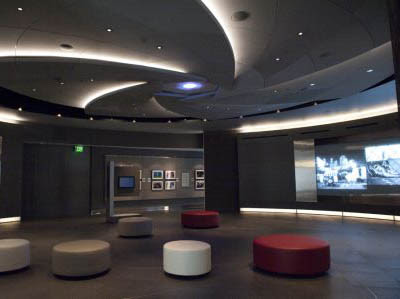 The past decades have seen a steady expansion of the scope of photography deemed worthy of museum display. Snapshots, mug shots, head shots, and news photos are collected, shown, pondered, and criticized. The Annenberg Space's initial selection is not that unusual (the celebrity photos are neither more nor less atrocious than those in LACMA's "Vanity Fair" show). What is unusual, for a museum-esque experience, is the Joe-the-Plumber populism. When MOMA or the Getty present "vernacular" photography, it is with raised eyebrows, as a "text." The Annenberg proposes that it's okay to appreciate non-artistic photos for the reasons they were created in the first place.
There is nothing wrong with that. The question is, is there an audience for it? Someone wanting to see digital pictures has options nowadays, from Flickr to Perez Hilton to Cute Overload (the latter two arguably better curated than "L8s Ang3les"). There was a decent crowd checking out the ASP on its first weekend, in an otherwise deserted Century City. It will likely draw workers from nearby towers during weekday lunch hours (admission is free). For other Angelenos, the necessity of entering an underground parking structure, paying for parking, and locating a building essentially invisible from the street, may be a deal-breaker. Those with an intellectual interest in photography will be willing to do it, but that's not the crowd that ASP is courting, particularly.
Were it mandatory that every American see a photography show every year, ASP would be packed. The rub is, attendance is optional. The people most in tune with ASP's populism are probably the people least likely to go. I am pretty sure my parents would like "L8s Ang3les" better than Opie's Guggenheim show, if only because there's less walking involved. I don't think they would voluntarily go to either.
Email Post
Labels: Annenberg Space for Photography Catherine Opie Cute Overload Flickr John Baldessari Perez Hilton Tim Street-Porter