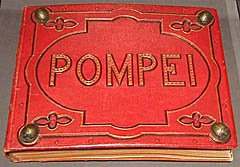 The Metropolitan Museum of Art does not charge extra for loan exhibitions. LACMA does, the latest example being "Pompeii and the Roman Villa: Art and Culture Around the Bay of Naples." It is not the smartest show the museum has ever done, nor the dumbest. Such distinctions may matter little, given the fantastic quality and quantity of work on view. It's a show you might want to see more than once… assuming you can afford it.
LACMA is charging $25 a ticket, $20 after 5 PM. Children are free, though a child's audio tour is $5 (the audio tour is free with the adult ticket). There's a $2 fee for online purchases, meaning that an adult buying online would pay $27 and a family of four would run at least $52. It wouldn't be hard to top $100 with parking, audio tours, and light lunch.
It this too much? In the LA Times, one museum spokesman says it is all about the Benjamins.

Exhibition tickets are often perceived as a means of crowd control, but that's not the main point with "Pompeii," says Mark Mitchell, the museum's budget and investment officer.
"The first goal is to try to recoup some of the costs," he says, declining to state the exhibition's price tag. "We hope that the tickets will generate enough revenue to help offset the cost of the rest of the exhibition program," Mitchell says. "We try to schedule at least one such show a year. Of everything we are doing over this time period, 'Pompeii' is the one that is most likely to draw."

The Pompeii show debuted at the National Gallery, Washington, where admission is free. There's not much point whining about that. LACMA isn't supported by the federal government and has to make back its costs one way or another. The more money it makes in admissions, the more shows it can do. The question is whether $25 tickets are the best way to achieve that.
In some ways, LACMA's position is comparable to that of cell phone companies. The have a fixed cost in building the phone network, one that doesn't depend (much) on how many calls are made. LACMA likewise has paid $X to mount this show. The cost is the same whether all 18 million metro-area residents attend… or if no one does.
Unlike museums, cell phone companies are in the business of squeezing every last penny out of their customers. They appreciate, however, that the way to do that is not to charge a single high rate. There are different cell phone plans tailored to different market segments. LACMA, like many museums, uses "differential pricing" for general admissions. It ought to consider such strategies for its ticketed shows.
• The museum should set aside some days or times as free. Apparently LACMA's bean-counters are terrified that everyone would come then. That's not the way "free" works. This past week, KFC and Pollo Loco gave away free chicken. Did "everyone" come? No, just the customers who really were price-conscious. Those who didn't need free chicken knew it would be crowded and stayed away. The happy fact is that many or most LACMA visitors are able to pay a $25 admission. Great. Other potential visitors aren't. They would gladly rearrange their schedules or accept longer lines to get in free. Let them make that trade-off.
• LACMA should offer discounts for repeat visits. One of the reasons the Met disdains tickets is its belief that big shows are best experienced in multiple visits. LACMA visitors who choose to see "Pompeii" again will have to fork over another $25. Museum membership is not much help. Though members get two "free" tickets (for two people at one date and time), they have to pay the regular fees for a second visit. Now sure, it's a small percentage who will choose to view a show again. The repeaters would likely be classics scholars, artists, dealers, Italian-Americans, and those living or working in the Miracle Mile. Okay — why shouldn't LACMA want these people to see the show again? These objects have been brought to Los Angeles at great cost and may never be here again.
(Pictured: A leather-bound album of Pompeii photographs, courtesy of "Leap Into the Void")
Email Post
Labels: LACMA museum admissions Pompeii

Knapptime said…
I agree that $25 is too expensive, but since you compare exhibition pricing to the Met--Isn't it true the Met charges $20 for general admission and $27 with an audio tour? LACMA's general admission is $12 with includes most special exhibitions. They only charge an additional ticket price one a year.
May 5, 2009 at 10:15 AM