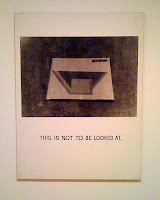 For years critics have been whining that the Museum of Contemporary Art "never" shows its allegedly unparalleled permanent collection. MOCA was listening (or did it just run out of money?)
Either way, the entire California Plaza building is now given over to the MOCA collection. There is the long-running "A Changing Ratio," with its blue-chip works of the 1950s and 1960s; a presentation of every photo in Robert Frank's iconic The Americans; and a just-opened exhibition of recent acquisitions. The big upcoming show this fall is, uh, a bigger permanent collection showcase. 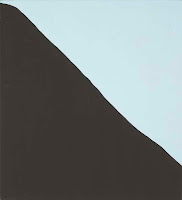 "Collecting History: Highlighting Recent Acquisitions" demonstrates how the collection has grown even as the museum's finances dipped into the red. It is mainly new art by younger artists. The highest-profile work is John Baldessari's 1966 jab at Artforum ("This is Not to Be Looked At," above). The image at right is not a chart of MOCA's endowment but a small, unusually spare Laura Owens. It's an abstraction in chocolate brown and sky blue, the two separated by a wavering diagonal. It both evokes John McLaughlin and is the antithesis of McLaughlin. How cool is that? 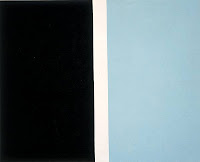 Compare McLaughlin's rigorously rectilinear #14, 1963 (left), also owned by MOCA but not on view. The pair recalls the diagonals beef between Mondrian and Van Doesburg, replacing it with gender issues that may (or may not) appear as inscrutable fifty years hence.

There are two Mike Kelleys from the Empathy Displacement series, and one of his garbage drawings. (The MOCA website now claims an impressive 38 works by Kelley.) Kelley has also emerged as a generous and discerning MOCA donor. This show includes his gift of Marnie Weber's cuddly-creepy Brown Bear. Another Kelley donation is a John Altoon pastel from 1962. Utterly unlike the Abs-Ex Altoon is known for, it presents to the he-male gaze two perky, half-clad temptresses in a style that's part Lisa Yuskavage, part Sex to Sexty.
Email Post
Labels: Artforum John Altoon John Baldessari Laura Owens Lisa Yuskavage Marnie Weber Mike Kelley MOCA Sex to Sexty

Donald Frazell said…
Pretty silly stuff, may have to wait for the big one, with real art, not art school "intellectual"Isms. cold, boring, too cute and clever to live. Dogmas illustrated are always small minded.