The Bernie Madoff of Gem Collectors 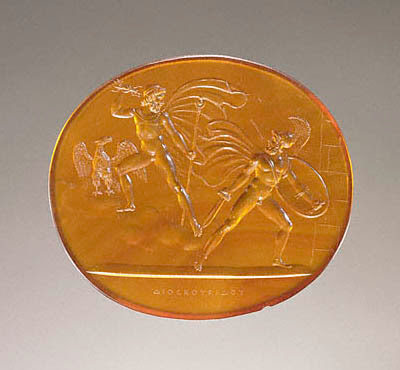 Prince Stanislas Poniatowski (1754-1833) was fantastically wealthy, heir to the Polish throne, and an art-world psychopath: the Bernie Madoff of carved gems. Poniatowski assembled a renowned collection of 2600 supposedly ancient gems, published with great fanfare in 1830. Turns out they were bogus, of the highest quality, naturally (above, Zeus and Kapaneus before the Walls of Thebes, now owned by the Getty). The "Poniatowski scandal" is just one of the stories in the Getty Villa's "Carvers and Collectors: The Lasting Allure of Ancient Gems." Though it's gotten little buzz, "Carvers and Collectors" is a major international loan exhibition that happens to fit in one small room. It's not really about forgeries. Within that one room lie mini-retrospectives of Gnaios, Dioskourides, and Solon—big names in this micro-mini-medium—and many of the world's most legendary gems (the Strozzi Medusa, the Felix gem, the Marriage of Cupid and Psyche). All four signed gems by Gnaios are here. That's something like an exhibition of Renaissance painting that packs in multiple works by Michelangelo and Raphael and every known Leonardo.
Like last year's Dilettanti show, this one is partly about the odd spell antiquity has cast down the ages. A case in point is Poniatowski, motivated not by gain but by the desire to be known as a great collector. Like Madoff, Poniatowski apparently worked on a need-to-know basis. He commissioned the finest Italian hands to design and execute his gems. Their efforts tended to be oval, just a little bigger and better than the ancient models, and favoring clever literary themes the ancients had bypassed. It's believed that Poniatowski had another carver or carvers forge Greek signatures onto his gems. He must have considered it the perfect crime, like stabbing with an icicle. Even today, there is no scientific way of determining the age of a carved gem. Ancient carvings often look as fresh as new.
Poniatowski wisely did not let many people see his treasures. He was almost tripped up by pride, however, when he sent plaster impressions of his best pieces to the Berlin Antiquarium. The implicit message: Eat your heart out, guys. Based on the impressions, curator Ernst Heinrich Toelken quickly concluded that Poniatowski's gems were fakeloo. Ironically, this was partly because the signatures were just too beautiful. The letters were neoclassical-perfect, not the crude, muscular lettering of antiquity. Despite his dismissal of their authenticity, Toelken wrote, "The impressions are indeed the most beautiful you can expect to see in art."
From there on, the story is less Bernie Madoff than The Talented Mr. Ripley. Suspicions grew over time, though Poniatowski was never exactly busted. The prince died in 1833, and his collection was sold at Christies in 1839. Captain John Tyrrell purchased most of the collection for 65,000 pounds. He thought he was getting a bargain. Tyrrell became the collection's staunchest defender against the doubters. It is "not probable that a nobleman of his [Poniatowski’s] high character and honour would have asserted that which he did not believe to be true," Tyrrell wrote. He commissioned a catalog illustrated with the new medium of photography. It was a bad investment. When Tyrrell auctioned the gems in 1861, some went for as little at 2 pounds apiece. (For more on the Poniatowski collection, download Claudia Wagner's "A Picture-Book of Antiquity: The Neoclassical Gem Collection of Prince Poniatowski.")
The Getty's installation geniuses nailed the lighting of daguerreotypes, and you might hope they'd do the same for carved gems. Most of the pieces here are presented through portholes behind glazing (necessary for pocketable jewels that would be obscured by any serious clamp). All are beautifully lighted with fiberoptics. It works well with cameos, where the image projects from the stone; less so with intaglios (where the image is convex). Opaque intaglios are hard to read, and some colorless-transparent gems look washed out, too. Needless to say, everything is small. We're talking half-dollar- to Viagra-size. 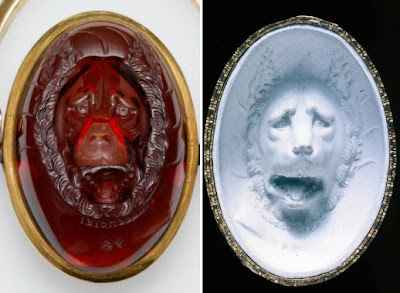 A traditional solution is to exhibit intaglio gems next to impressions. But impressions can look amazingly different from the gems, no matter how they're illuminated. Compare this photo of the garnet Sirius with its plaster impression (both from the Boston Museum of Fine Arts' site; the plaster is not in the Getty show). Because impressions are more readable, viewers tend to ignore the gems themselves, and that defeats the purpose of showing the original object.
The appearance of gems also varies with lighting. Under the Getty's backlighting, Gnaios's Sirius glows weirdly beautiful (and is not much like the photo). Recognizing the legibility issues, the Getty has installed digital cameras with some displays. You can position the camera over a gem, rotate a ring to focus, and then view it greatly magnified on a video screen. These cameras get a lot of use, but that doesn't mean they're effective. The video images have blown-out highlights and are far inferior to the professionally lighted photos you can get on the exhibition's website.
This show thus raises an unsettling Walter Benjamin question. What if a work of art is better appreciated in reproduction, than in the original object? (It's something another local museum is dealing with, with much-smaller artworks and budget).
Incidentally, the Getty Villa is now showing its smartest group of loan exhibits ever. The biggest coup is the Chimaera of Arezzo, the sort of treasure that rarely travels, here given the focus-show treatment. "The Golden Graves of Ancient Vanni" is a plodding archeologist-procedural with much newly excavated material. Many of of the questions it raises remain unanswered. Among them: what's with those ritual stick figures that look like Giacometti's atom-bomb existentialism?
Email Post
Labels: Bernie Madoff Dioskourides Gnaios Solon Stanislas Poiniatowski