“Cast in Bronze: French Sculpture” at the Getty 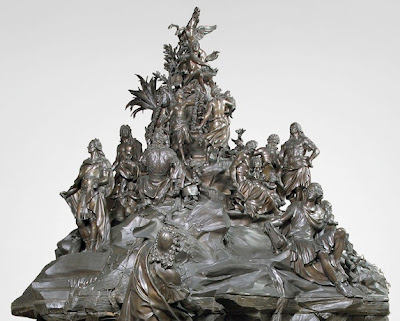 Another summer, another stupendous sculpture show at the Getty Center? Last year the Getty had Bernini's portraits, and now it's got "Cast in Bronze: French Sculpture from Renaissance to Revolution." It's a huge show, more characteristic of what you see at the co-sponsoring institutions, the Metropolitan Museum and the Louvre. Between the Renaissance bronzes, tabletop sculptures, reliefs, and statues, the object count comes to 129, about equal to that at the capacious Met.
But this February Ken Johnson, in the New York Times, called "Cast in Bronze" a "tough sell." Not without reason, he wrote, "If French bronze sculpture of the 17th and 18th centuries is not your thing, you probably have plenty of company." Johnson detected a "stifling traditionalism" and "a cold impersonality, cramped imagination and slavish obeisance to the official culture…" Ouch.
Unquestionably, the show suffers from a doughnut hole. The first two rooms (Fontainebleau mannerism) are a delight. The last gallery (the Enlightenment) rocks. The rooms inbetween are a let-down. The culprit is French anti-baroque classicism. No French sculptor possessed the genius of Poussin, nor the fetching weirdness of de La Tour. The problem with French bronzes "Renaissance to Revolution" is definitely the "to."

All that said, Getty curator Antonia Boström has done an impressive job of pushing it up and shoving it up. Mannerism leads to an intriguing shrine to the child-monarch Louis XIV, followed by a room devoted to his destroyed equestrian monument by Francois Girardon. The Revolution preserved a gargantuan bronze foot as a memento of the bad old days. It's now here at the Getty, a Monty Python foot squishing the ancien régime. You can compare it to a fancy bronze reduction of the whole monument and reproductive graphics. All of this is wonderfully instructive, for the history alone. That Girardon's swagger-deficient Louis was a yawn next to Bernini's is beside the point. It's not until you get past the half-way point (in a room of secular baroque subjects) that it finally sinks in. Hey, French baroque sculpture is kind of dull.
• There's nothing dull about the lighting. It's hard to believe the sculptures could have looked better at the more famous venues. Some recent shows in Meier's pavilion have cut off the natural light partly or altogether, doubtless for the best conservatorial reasons. This show should demonstrate how much natural light adds (and maybe it's worth omitting some light-sensitive works, if it comes to that).
• What works well in bronze: seals (the marine mammal). What doesn't work in bronze: rainbows. Incredibly, this show has specimens of both. 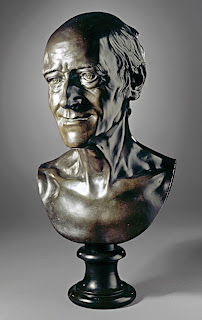 • Barthélemy Prieur and Jean-Antoine Houdon (subject of a 2003-4 Getty show) are the stars. Girardon, not so much. A gallery of Enlightenment worthies has two unexpectedly compelling portraits by Jean-Baptiste Pigalle, one a seriously middle-aged Diderot and the other a frail-elderly Voltaire (pictured). The Voltaire is an especial coup, as it comes from an institution that hasn't shown it to the public in ages: a certain Los Angeles County Museum of Art. (To add to the irony, it was bought in 1978 with deaccession funds, implying the curators wanted to show it, in place of the storeroom works they sold. LACMA recently copped Houdon's life-size plaster of the same philosophe, another reason to show it.)
• Most memorable work: The French Parnassus (top), whose credits read like a slasher flick — idea by Évrard Titon du Tillet; sculpture by Louis Garnier; additional material by Simon Curé and Augustin Pajou. It's a monument to great French playwrights, poets, and musicians patronized by Louis XIV. The roster includes Racine, Molière, La Fontaine, Lully (among others), and definitely not forgetting Louis XIV, shown as Apollo. Tillet, a debauched attorney, intended a giant Mount Rushmore monument in a garden. He couldn't afford the staggering cost. All that resulted was this bronze maquette by Garnier. For a while, the bronze was a Hollywood Walk of Fame, with figures added according to changing tastes. Tillet's enthusiasms, particularly on a scroll in the bronze, were unpredictive of posterity's. Hollywood Boulevard has the same problem.
Email Post
Labels: Antonia Boström Évrard Titon du Tillet Francois Girardon Getty Museum Ken Johnson Louis Garnier Louis XIV Richard Meier