The above painting has recently been placed on an easel in the Getty Center's Sketching Gallery, where visitors (mostly children) are invited to try drawing it. There's no indication that it was once considered the world's most expensive painting — per square inch. That statistic delighted its owner, J. Paul Getty, the world's richest man and one of its cheapest.
Getty exasperated dealers and curators alike with his penny-pinching. (The linens in his Malibu home came from J.C. Penney.) Getty's dollars-per-square-inch math only seconded his unfortunate predilection for buying big, ruined, workshop copies. The tycoon bought half a dozen workshop Rubenses, including some big, blowsy female nudes that are in the museum storerooms and unlikely to see the light of day. But in 1971 a small painting convinced Getty to put a crowbar in his wallet. It was an alternate version of one of Rubens' most admired oil sketches, in the Museum of Fine Arts, Brussels. With the flair of a cinematic montage, it shows four views of the same unknown man, each with a distinct and engaging expression. Getty paid nearly a million dollars for it. It went on view under the now-alarming title, "Four Studies of a Negro's Head." Understood to show an African living in Antwerp, it was exhibited as an autograph Rubens and rated one of the few great paintings in Getty's Malibu museum.
The year 1971 was the high point of Getty's collecting. He bid a stunning $4 million for Titian's Death of Actaeon — but that deal fell through when Britain refused export. Four Studies seems to be the most expensive painting J. Paul Getty ever acquired — his museum's first million-dollar painting.
In calculating its value per square inch, Getty must have been trying to upstage two multi-million-dollar Rembrandt purchases of the 1960s. Getty was said to have been shocked when the Metropolitan Museum paid $2.3 million for its large Rembrandt Aristotle Contemplating the Bust of Homer in 1961. Four years later, Norton Simon paid $2.2 million for a smaller, unfinished Rembrandt, the so-called Titus (now, Portrait of a Boy). The Aristotle would have been about $757 a square inch; and "Titus" $3983 (going by the reported price of U.S. $2,234,400 and the dimensions on the Norton Simon Museum site). Getty's much smaller painting would have been slightly less: $3922 if he paid an even million. So Getty would have needed some creative accounting (currency conversions or auction house premiums?) to convince himself that the math was on his side. At any rate, the claim of most expensive painting per square inch was duly mentioned in press reviews of Getty's new Malibu museum.
Getty's record, such as it was, didn't last long. The same year he acquired Four Studies, the Metropolitan Museum bought another painting of a black guy, Velazquez's Juan de Pareja, for $5.5 million. The underbidder was Norton Simon. Per square inch, the Velazquez came to a record $6250.
That at any rate proves that Getty was playing in the big leagues. But soon scholars were voicing doubts about his buy. Perhaps it was only a workshop copy. The museum's string of increasingly desperate attributions shows how much sunk costs impair clear thinking. For a while the museum took the tack that if it wasn't by Rubens' hand, then it had to be by his most distinguished follower, Anthony van Dyck (as if a van Dyck attribution was the consolation prize for buying a fake Rubens). It was labeled "van Dyck," "attributed to van Dyck," "attributed to van Dyck or Rubens," etc. But there were problems with a van Dyck attribution, too. Van Dyck painted a fair number of blacks (naturally, as servants of the white folks) and they're all pretty generic. It was hard to believe that van Dyck was capable of painting a black man with such naturalism and then chose not to. 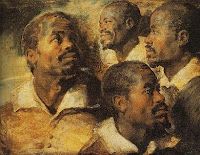 Rubens scholar Julius Held demolished the Getty's optimistic attributions. Part of his argument requires no connoisseurship. Compare Rubens' sketch in Brussels (left) to the Getty version. The Getty painter has rearranged the heads to fit a wider format. But he seems incapable of inventing anything that's not in the Brussels original. Look at the second head in the Getty panel. His chest is an undefined blank. The Brussels picture shows why: This figure has no chest because another head overlaps it. The Getty artist was apparently a decent copyist who couldn't paint a simple shirt front on his own.
The million-dollar "Rubens" has thus never been shown at the Getty Center. Now rechristened Four Studies of a Male Head, it's making a belated debut — uh, mainly to amuse the kids. Maybe some day they'll get a kouros to sketch, too.
Email Post
Labels: Anthony Van Dyck Getty Museum J. Paul Getty Julius Held Peter Paul Rubens