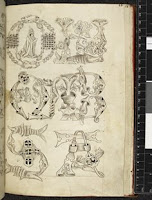 In other medieval news, U.K. media is reporting that the British Library has raised the money to acquire the Macclesfield Alphabet Book, a British manuscript coveted by the Getty. The Getty had offered to pay 600,000 pounds for the 46-leaf manuscript, which could be considered a late gothic precursor to the Model Book of Calligraphy. The British Library plans to display the alphabet book starting Friday.
Email Post
Labels: British Library Getty Museum