Blockbuster Lipstick on a Pig 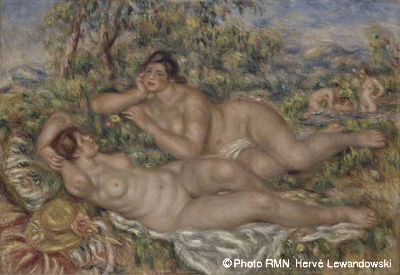 There's been a lot of talk about blockbusters lately. There hasn't been much mention of a recent recessionary trend, blockbusters that aren't blockbusters. Museums take shows that wouldn't have been considered blockbusters in flush times and try to pitch them as such, by charging extra and requiring timed tickets. Call it blockbuster bracket creep — or maybe putting lipstick on a pig. Consider these two shows on LACMA's upcoming schedule:

Renoir in the 20th Century.
In the conventional view, Monet's late water lilies were important to modernism. They anticipated Pollock and rate acres of wallspace at the Museum of Modern Art. In contrast, MoMA deacessioned its late Renoir nudes, works that have been dismissed as an embarassment (and which anticipate, uh, Botero?) This show, about to open in Paris, attempts to demonstrate that modernists did pay attention to late Renoir. With luck, Renoir's blowsy Bathers (above) might resonate with Yuskavage, Currin, or other contemporary artists. 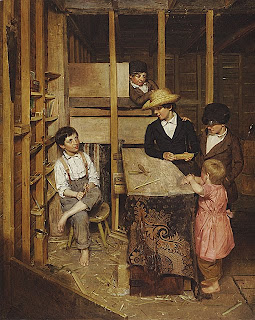 American Stories: Paintings of Everyday Life, 1765-1915
A look at American genre and narrative painting. The press release promises works by Homer and Eakins, but the show's real mission appears to be excavating lesser talents like Allen Smith, Jr. (left, The Young Mechanic).

The good news: These are quirky shows on neglected art that textbooks dismiss as junk. They sound like a lot of fun.

The bad news: They apparently hope "Renoir in the 20th Century" will pass as the latest Impressionist blockbuster to a crowd that won't know the difference. "American Stories" is co-organized with the Metropolitan Museum, where it will not require special ticketing.

It's hard to fault LACMA for doing what it has to do to survive. But geez. Not so long ago shows like these would have been considered the opposite of blockbusters.
Email Post
Labels: Allen Smith Jr. blockbusters Holland Cotter LACMA Metropolitan Museum of Art Museum of Modern Art Renoir Tyler Green