The Summer of Michelangelo and Velazquez 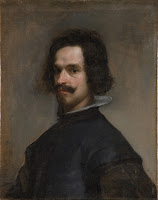 New York's Metropolitan Museum has just announced that this Velazquez is authentic — again. It was thought to be autograph, and a self-portrait no less, when bequeathed by financier Jules Bache in 1949. A generation later, scholars demoted it to workshop status. Now a new cleaning has convinced experts it's the real thing. Though the evidence and reasoning sound incontestable, it's hard not to be struck by a broader trend. Scores of attributions that were put to the stake in the twentieth century have been revived in the 21st. Like the undead, ambitious attributions never truly die.

The Met has been a hotbed of upgrades. It just closed a focus show of "Michelangelo's First Painting," a panel long presumed to be a copy. Maybe the biggest argument against its authenticity is that curator Keith Christiansen couldn't convince the Met to buy it. It went to Fort Worth's Kimbell Museum. (Changes in a demon's tail, as revealed by modern imaging techniques, make a reasonably impressive case for Michelangelo, irrespective of connoisseurship.) Can it really be that two super-rare paintings, by Michelangelo and Velazquez, turned up the same summer?
On loan to the Met is the iffy Vermeer that Armand Hammer had to be talked out of buying (the National Gallery's John Walker set him straight). Guess what? It's authentic, too. So is the Met's Hieronymus Bosch, until recently dismissed as a pastiche.
Reattributions have been especially important to Los Angeles institutions. L.A. didn't start collecting until after most of the great European paintings had been taken. The city's museums often had to snap up Old Masters fresh after a restored attribution. LACMA's Cardinal Roberto Ubaldino, once thought to be a copy, is now understood to be Guido Reni's original. The Titian Venus and Adonis at the Getty was auctioned as a studio work, displayed at the Getty as a Titian, then as "Titian and workshop," and now as just plain Titian. The Norton Simon Museum's Rembrandt Self-Portrait is now judged partly autograph, dispelling the Rembrandt Research Project's downgrade (not that the folks in Pasadena ever paid them any mind).

Can we believe all these Antiques Roadshow happy endings? You might think that what goes up must go down. For every upgraded attribution, there should, on average, be a downgraded one. Downgrades happen, of course, but they don't get the same publicity. This makes it hard to confirm the suspicion that upgrades have way outnumbered downgrades lately. LACMA bought a Van Dyck Andromeda (left) that was downgraded, and the Getty bought a Canaletto view now labeled an early Bellotto.
Art history, supposedly a search for truth, has always been subject to changes in the profession and the art market. In the age of Duveen (he nipped and tucked the portrait at the Met, to make it look more like a major modern Velazquez) there were few art historians policing the art market. Some of the great connoisseurs were on a dealer's payroll anyway. Ambitious attributions proliferated to meet market demand. In the second half of the twentieth century, American universities churned out thousands of art history Ph.D.'s. They needed something to write about and quickly discovered that the market, and museums, were rife with dodgy attributions. Disattribution became a way of making a living.
Today, the supply of major European paintings is so slender, and the prices so astronomical, that curators rarely expect to acquire them. That leaves more time for gazing at the study collection and dreaming. The pessimistic view is that attributions are a pendulum that swings back and forth, reflecting intellectual fashions, not truth. The optimistic spin is that art history is like Wikipedia. It is founded on the earnest hope that the changes, while fallible, are mostly for the better. In Los Angeles particularly, there's a lot riding on that hope. As former Getty Museum director John Walsh once said, "I work in a field — art history — that is rich in adjectives, poor in provable statements."
Email Post
Labels: Getty Museum John Walsh LACMA Metropolitan Museum of Art Michelangelo Norton Simon Museum Velazquez