Succeed Wildly or Not at All

The most cogent comment on the "Popcorn Summit" comes from Doug Cummings. He's quoted in the L.A. Times,

"It seems like Govan is dreaming very big and setting up the program to succeed or fail only in terms of fundraising potential," said Doug Cummings, a member of Save Film at LACMA. "Govan's track record is that of a fundraiser and for him a program succeeds wildly or doesn't succeed at all. They just couldn't reinstate the program with modifications, they had to re-envision it on a large scale." 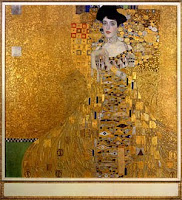 Come to think of it, this sounds familiar. Remember those Klimts? Acquiring even the least of the five would have been a major coup, probably costing more money than the museum had ever paid for anything. But Govan wasn't interested in just one Klimt. He wanted all the Klimts.
In fairness, Govan's all-or-nothing approach has paid many handsome dividends (one is the trove of Oceanic art opening later this month). But it's easy to share Cummings' exasperation that the film program's underachieving status quo is no longer an option. Film at LACMA will have to succeed wildly — or not at all.
Email Post
Labels: Doug Cummings Gustav Klimt LACMA Michael Govan

Anonymous said…
Was M. Govan interested in all five or was E. Broad the LACMAn who spearheaded the 'all five' focus?
September 3, 2009 at 7:40 AM

Anonymous said…
To my way of thinking LACMA has taken a seriously unfair beating - if they had fired a huge number of staff like the Getty, MoMA, Philadelphia, the Met, etc. would anyone care? What the museum has tried to do is keep the film program alive, keep its staff paid and figure out a way to raise money - in 5 weeks they have managed to come up with $150,000 - which while only a life line is enough to keep the wheels on the bus. The commendations for Govan should ROLLING IN but it is always easier to find the cracks in the wall that acknowledge accomplishments.
September 3, 2009 at 11:45 AM