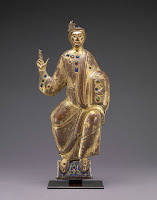 In April 2007, after the purchase of the Limoges Christ in Majesty at left, the Getty announced its intention to display it in a "cathedral treasury." Those words sounded ambitious for a "collection" of one sculpture, albeit one to be augmented by stained glass, manuscripts, and early Renaissance decorative arts and paintings. The opening was to have been early 2008. That date slipped, and the "cathedral treasury" label is apparently no longer spoken. (Richard Meier must be fine with that.) As recently as a few months ago, the Getty website was talking about debuting the new installation in early 2009. Latest word, according to a September newsletter, is late 2009. 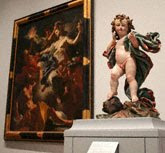 The Getty also reports that that its former drawing gallery (in the East Pavilion) has reopened as a room of German and Italian art, 1680-1750. Like the upcoming the medieval-Renaissance rooms, the display blends sculpture, decorative arts, and paintings.
Email Post
Labels: Getty Museum Limoges school Richard Meier