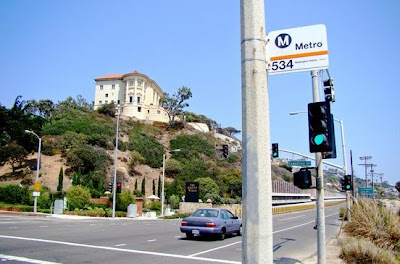 The Wall Street Journal is the latest publication to be punked by the Villa de Leon. In Stan Sesser's "The Bus Stops Here," the WSJ misidentifies the stately building above as the Getty Villa, "perched on a bluff above a bus stop." All together now: You can't see the Getty Villa from Pacific Coast Highway. The Mediterranean structure on the hill is a private residence known as the Villa de Leon. The New York Times made a similar goof in 2005. Who'd have dreamed that a billionaire's outlandish fantasy of a Herculaneum villa would forever be confused with, uh, the neighbors' place down the street?

The Villa de Leon was designed by architect Kenneth MacDonald for wool magnate Leon Kauffman in 1926. It was the first house in the area, predating Getty's ranch house and even the Pacific Coast Highway. Kauffman wanted an Italian palace and got it, some 12,000 square feet on three levels. Beach access was originally by a private funicular railway.

After many changes of ownership, the house was listed for sale in 2005 (for $15 million), necessitating suitably soigne photos that you can find here and write-ups in the Los Angeles Times and Palisadian-Post. According to Zillow, it sold for $10 million in June 2007 (and not surprisingly, is worth less now). Said listing agent Randy Freeman, "It's not your normal Mediterranean type of home, it's more like a museum than a home."
Email Post
Labels: Getty Villa Kenneth MacDonald Leon Kauffman Villa de Leon Wall Street Journal