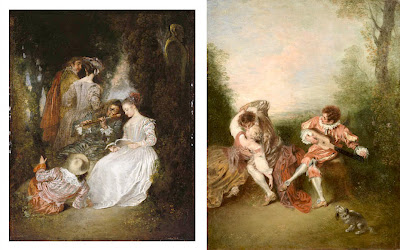 Ten years ago LACMA acquired a small, quintessential Watteau painting, Perfect Accord (above, left). It was a stunning coup as the museum had neither a Watteau nor hope of landing one (Armand Hammer had promised an early, iffy Watteau — but it ended up in his Westwood museum). Two years ago, the LACMA painting's long-lost twin turned up, Martin Guerre-style. The Surprise, above right, was found in a English collection. Nicolas Hénin (1691-1724), a friend of Watteau's, had owned both paintings and displayed them as pendants. In July 2008 The Surprise went on the block at Christies London. It sold to another private collector for $24 million. That's far more than LACMA could have paid for its painting. Adding to the intrigue was the Getty's low profile. Probably no museum that can afford a Watteau wants one badder than the Getty does. It even owns a drawing of the flutist in Perfect Accord. Why didn't it buy either Watteau?
Perfect Accord has condition issues visible to the inexpert eye: a lumpy, alligator-textured surface in some areas and passages where the paint has worn thin. In contrast The Surprise was said to be in a "superb state of preservation," something almost unheard of with Watteau. But some connoisseurs faulted the composition of The Surprise as awkward and unbalanced. The swooning woman, who ought to be a center of interest, is unceremoniously cut in two by the picture's left edge. Large areas of sky and bare ground are stark for Watteau. Who does a wistful scene of love-making and leaves the top half empty sky?
The Surprise has just gone on view in New York as part of the Metropolitan Museum's "Watteau, Music, and Theater." Unfortunately, the Los Angeles painting is not in the show. (Nor is it on view in Los Angeles while LACMA's European painting galleries are being renovated.)
Henin's display of Perfect Accord and The Surprise as a matched set may not have been Watteau's idea. It's known that Perfect Accord was painted on a repurposed panel that was formerly part of a carriage door. The other half of the same carriage door was used for a painting called The Italian Serenade, now in Stockholm. Watteau then took a fresh panel — not a carriage door, it would appear — to make a copy of The Italian Serenade. For some reason he lost interest in that project and painted over the copy with the picture we now call The Surprise.
Perfect Accord is slightly smaller than The Surprise. They are presented in relative scale above. It turns out the two paintings were reunited, though not publicly, before the 2008 auction. According to the Christies write-up,

In a recent examination of the two paintings side-by-side (made possible through the generous cooperation of J. Patrice Marandel and Joseph Fronek of the Los Angeles County Museum of Art), they made slightly awkward companions: although the same size and painted at the same moment, the figures in L'Accord Parfait are larger, closer to the picture plane and occupy more of the composition; in La Surprise, the figures are situated in the middle-ground and are slightly smaller in relation to the overall composition. Furthermore, while the setting of the LACMA picture is a twilight, autumnal enclosure of trees, La Surprise takes place in a luminous, brightly coloured landscape with open sky.