Crimes Against the Eye (LBC Edition) 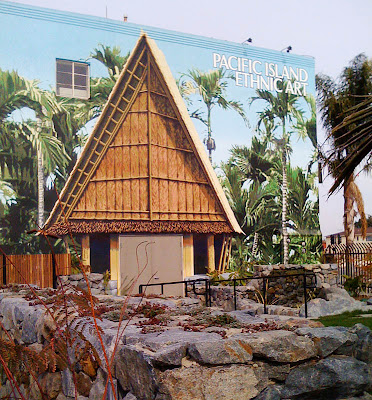 Above is a shot of Long Beach's still-unopened Pacific Island Ethnic Art Museum. Like its near neighbor, the Museum of Latin American Art, it's a gift of the late physician and philanthropist Robert Gumbiner, a man who cared more about art than architecture. 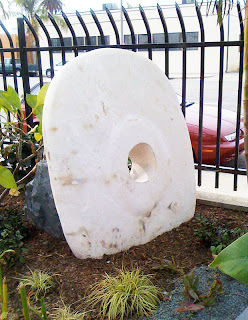 The 2400-square foot building, formerly storage for MoLAA, is now covered in murals of palm trees by Art Mortimer. It fronts a small, fenced-in sculpture garden — really a traffic island. The only sculpture-esque objects presently on view are some fake Yap Island stone money.
The new museum will be affiliated with Yap Island's Ethnic Art Institute of Micronesia, also founded by Gumbiner (who had HMO business in Micronesia). As recently as last February, there was talk of the Long Beach museum opening in summer 2009. It didn't happen, and no revised date has been officially announced. Mortimer's web site says "they hope to open early in 2010."
Will the new museum seize MoLAA's unofficial crown as the ugliest museum in Los Angeles County? Not likely. Once you get past the fact that PIEAM (or however they'll abbreviate it) looks nothing like a museum, it's really no more objectionable than other examples of tiki culture kitsch. You've probably had an office party in a worse space. MoLAA, on the other hand, takes ugliness to whole new level. Damn! 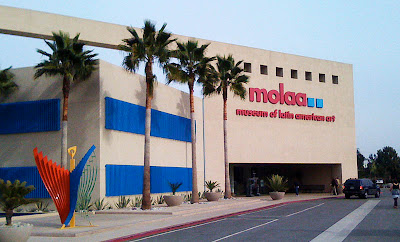 (So forget about the building: MoLAA's current show, "The Sites of Latin American Abstraction: Selections from the Ella Fontanal-Cisneros Collection" is fantastic. Named one of the ten best shows of 2009 by Christopher Knight, it's up through January 24. Following 2008's Wilfredo Lam exhibit and accompanying a smarter, more contemporary rotation of the permanent collection, "Sites" proves that MoLAA is doing something right, on the inside.)
Email Post
Labels: Museum of Latin American Art Pacific Island Ethnic Art Museum Robert Gumbiner

Donald Frazell said…
Yeah, MoLAA aint all that architecturally, but Dr Gumbiner insisted all work be financially sound, unlike someother museum we know of, and it can still be fixed with additional work, just like my reworking of LACMA, which aint too pretty with its horribly boring beige, too lazy to paint and totally lacking in imagination and creativity. Rather fundraise for some sterile glass and steel and colorless mausoleum to the greatness of Hollywood powerbrokers, than create a space for peoples of all backgrounds to congregate in and create a intereaction of styles and ideas. Arrogance has become the prime force behind academic monstrosities. Unlivable, cold, vain.

But the Japanese Pavilion holds the crown of ugliest by far, though this above tiki incarnation is in competition, havent gone by in a couple of months, will drop by this Sunday. I have also shown how to fix the Japanese building, making it er, really kinda Japanese looking rather than high school shop class construction foam barfy green. Just paint the pillars various appropriate colors on the three main LACMA buildings, and ignore the tinker toy Broad as it is sterile and life will be in LA Times Square if done correctly. Recognizing that we ARE a latin influenced culture, at least those outside of academic settings. Just check my blog, can paint for half a mil, and do some construction for maybe a few more to really make it happenin, with new elevators like the Bradburys in the wasted atrium of the Ahmanson, and paint the damn thing you wimps!

The abstract show at MoLAA looks very uninteresting, artists who avoided anything passionate so as to get government approval and backing. Boring stiff stuff with no rhythm or rich chords of color, you call that Latin? Riiiight. Watered down Euro academic drivel for approval of the ruling class.

As always, art collegia delenda est
Save the Watts Towers, tear down or reinvent the Ivories
December 29, 2009 at 12:40 PM

Donald Frazell said…
By the way, I used to be notorious on basketball sites, ask them at SoCalHoops.com, as the one and only LBC> Met lots of great college and AAU coaches, who know far more and better prepared and trained than artistes there, as i sued to coach travel ball and know many in hi D1 and even the NBA. Now those boys work hard.
December 29, 2009 at 12:43 PM

Donald Frazell said…
Check my blog, i just posted how to enliven MoLAA, easily done for little money, which will disappoint the fundraising powers that be, those who owe their jobs to hobnobbing. MoLAA isnt like that as Dr Gumbiner set a culture of responsibilty, and focuing on art, not social page brownosing.