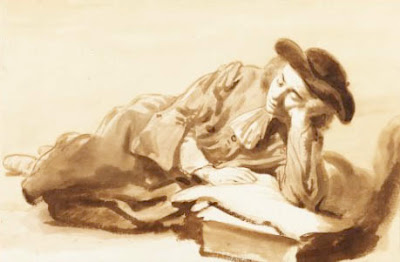 The surprise star of the Getty's Rembrandt drawing show is Gerbrand van den Eeckhout (1621-1674). (Above, Eeckhout's Reclining Young Man, lent by the Rijksmuseum.) He's not Rembrandt's most famous pupil, nor the most admired as a painter. The latter distinction probably goes to Carel Fabritius, who died rock-star-young in the explosion of the Delft gunpowder arsenal. Fabritius left behind a handful of truly odd paintings that have fueled an outsized mystique. But Eeckhout made some of the most distinctive drawings to come out of Rembrandt's studio. He stood out in the Metropolitan Museum's 2006 "Rembrandt and His Circle," and he does here. 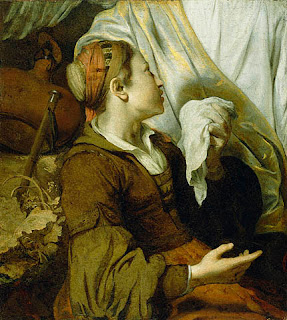 The Getty owns an Eeckhout painting, albeit a fragment. It's cut-down Hagar Weeping, now on view in the Rembrandt room of the Dutch painting galleries. The Eeckhout is one of the few Getty paintings that was a gift from someone other than the founder. It was donated in 1972 by Martin J. Zimit, owner of French and Company, a famous New York antique dealer. Getty was one of his best customers.
Email Post
Labels: Carel Fabritius Gerbrand van den Eeckhout Getty Museum Rembrandt

Anonymous said…
LACMA also owns a painting by Carel Fabritius. I don't think I have ever seen it on view. http://collectionsonline.lacma.org/mwebcgi/mweb.exe?request=record;id=1014;type=101
December 23, 2009 at 9:15 AM