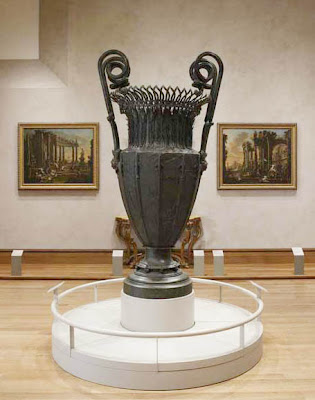 The Getty has bought Jean-Desire Ringel d'Illzach's bronze Monumental Vase, exhibited since this past spring as a loan. The Symbolist showpiece dates from 1889—the nominal year of Ensor's Christ's Entry into Brussels—and shares the Ensor's scale, being 9 feet high. Presently shown in a room of Italian neoclassic furniture, it will ultimately occupy the adjacent space, the erstwhile "Temple of the Graces." Richard Meier designed the skylighted two-story-high room during the Getty's long, unsuccessful battle to export Canova's The Three Graces from Britain. The hope was that the elegantly proportioned room would be a worthy setting for the Canova marble, which would have been the greatest neoclassical sculpture in the Western hemisphere. When the Canova deal fell through, the "Temple" was installed with a modest display of small terracottas on faux workshop benches. (The Getty folks couldn't bring themselves to put Nollekens' three marble goddesses in the room meant for Canova's.) Now, the Ringel d'Illzach has been deemed worthy of the Getty's prime space for sculpture. It will be the centerpiece of a new display of symbolist sculpture, set to open in fall 2010 (but these dates tend to slip).
Needless to say, Ringel d'Illzach is not the name Canova is. The funereal-black Vase could hardly be more different from the pristine Three Graces. Though both draw on antiquity, the Vase looks as contemporary as a Tim Burton prop (which suggests both its originality and its narrow range). It's about mortality, not fertility; snakes and snails and peacock tails—not sugar and ice.
Email Post
Labels: canova Getty Museum Jean-desire ringel d'illzach Tim Burton