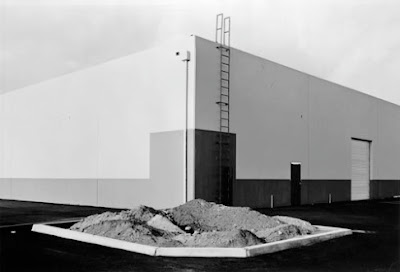 One of LACMA's curatorial innovations is the faithful-as-practical reconstruction of an art exhibition from the past. "Degenerate Art," presented in 1991 (and by the Nazis in 1937) remains the touchstone of the genre. LACMA's latest effort is a reprise of the 1975 "New Topographics: Photographs of a Man-Altered Landscape" presented in Rochester (George Eastman House), Los Angeles (Otis Art Institute), and Princeton (University Art Gallery). The present exhibit has about 60 percent of the photos in the original. Though the title became a meme, the 1975 show was a bust. Few attended; most of those who did hated it; even the catalog was thinner than a Great Recession Vanity Fair. The show nonetheless boosted the reputations of Robert Adams, Lewis Baltz (above, South Corner, Riccar America Company, 3184 Pullman, Costa Mesa), the Bechers, Joe Deal, and Stephen Shore. They were the Ash Can school of landscape photography, lensing whatever was man-made and banal: subdivisions, industrial parks, trailer parks, intersections, motels, parking lots.
As a movement, the New Topographers have been more respected than loved. ("If I sign your petition can I look at something else?") The revelation of this exhibition is how much things have changed. OK, it's not exactly the feel-good show of this holiday season, but neither is it medicinal.
These artists were reacting against the Ansel Adams mode of landscapes. Yet as recently as the mid 1970s, that still entailed making meticulously exposed 8x10 B&W prints. (Only Shore's photos are in color.) Houses and cars and signs have changed enough to introduce unexpected notes of nostalgia. It's easier to read irony into the pictures, intended or not. Have the images lost their edge, or simply become part of art history? 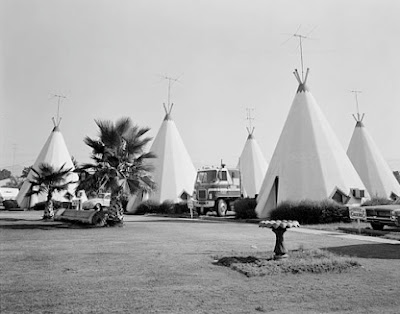 The outliers here are John Schott and the unpigeonhole-able Bernd and Hilla Becher. Schott's photos of roadside America (above) stick out like a Doisneau in a Kertész exhibition. The Bechers' grids of ramshackle American coal-mining structures (below) are a world removed from the Teutonic water towers. The water towers are found Brancusis; the American contraptions are a train wreck. 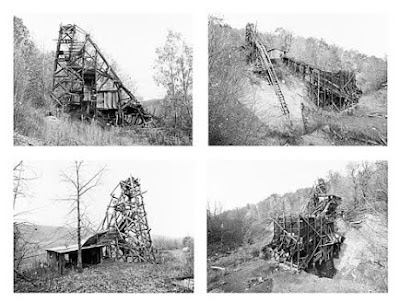 LACMA supplements the installation with the honorary 11th New Topographer, Ed Ruscha. His photographic books, like 1966's Every Building on the Sunset Strip, were influential to this generation of photographers. Shown in vitrines, the Ruscha books and other influences don't interfere with the act of historical recreation. There are also two videos by the would-have-been 12th New Topographer, Culver City's Center for Land Use Interpretation (not in the 1975 exhibition because it didn't exist).
"New Topographics" occupies most of the second floor of the Broad Contemporary Art Museum. The white-cube installation fits the material, and there's not a trace of the bad lighting afflicting former second-floor installations.
In a show of downplayed ironies, the greatest may be the fact that Eli Broad prospered selling the suburban sprawl here critiqued. KB Home, founded as Kaufman and Broad in 1957, would have been hitting its subdivision-extruding stride in 1975. Though the firm now promotes carbon-footprint-minimizing building practices, the New Topographers aren't its only critics. 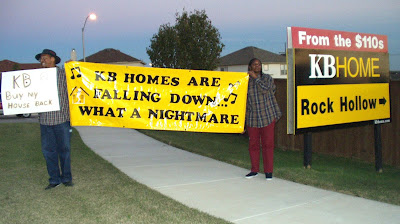 Donald Frazell said…
I saw this Saturday, may have passed you.:)(not really an ogre, just love art far more than artists) The coal mining town photos were the best by far, the highway 66 interesting, and would be fine in a book by themselves. The rest together with the best as a book, oK, not that I would buy them.

But none would be good on the wall, though the mining town the closest, and the best printing. The others all sterile Tri-X with no tonal range at all. Probably processed in D76 as this stuff has no imagination or skill, on Kodak Polycontrast, not even good paper like Oriental. Boringly lit, flat, no movenment, no layers, no purpose except illustrating silly academic ideas, this is where the academic contemporary mediocratizing forces entered photography. Its all there is now.

These are all "educated" photographers, in other words, trained into Pavlovian responses, No true human ones involved, nothing heightened, intensified, nothing about our place in the world, only the bland world we have created from laziness, for strictly industrial purposes or just plain cheapness. Almost all true artists are self taught, those who have been trained take years to rid the disease from their systems, like Paul Klee, and Richard Diebenkorn. Who had a life before art school anyway.

This is a desperate attempt at a style, or lack thereof, one for a place in the field as a career, not exploring our wpord. The two series I mentioned the only ones close to this essential of creative art. Which the rest are not at all. Their are illustraions. Thats it, to be used in books to support a thesis. Which is not creative art, which is purely the visual language, of defining humanity, exploring nature, and searching for god. Always has been, always will be.

This is stuff made by hyper sensitive children. Those of us Men who work in such areas know these places far better, and find nothing interesting in them. For there is nothing, it is all about work, making things, not living life intensely, but survival. If our culture collapses, perhaps it will interest future generations as a document of the stupidity of man. Of wastefulness, of mass concumption over quality and seeking the essential in life. The coal mining strucutres were integrated into the environment. The rest wipes it out, paves it over, and are completely aritificial constructs, no living with nature, or working in essential industries.

I took many such photos with my 4x5 at this same time, but considered ones like this failures, and threw them out. I shot works of complex patterns, strucures, living meat and bones, flesh and blood equivalents. Of mans works integrated into nature, with the essence of life, god, revealed through realationships. For relationships are everything. And there are none here. No musicality, no rhythms, no linear melody. No life.

And therefore no art. On a related theme, I was observing the museums and how to fix them up instead of wasting $750 million to tear down and rebuild LACMA. There is no reason too, and i will write an article on my blog explaining why, and how to make it more a part of our city, to bring in more people, and have it become what museums are supposed to be. Not Mausoleums of the rich, but places of meeting, of cross fertilizing, of growth, of life. To make it festive, a part of our land, our history, to do it for perhaps half a mil, and then open it to the people of LA, instead of as a playground of the rich and effette. Time for essential creativity, not the sterility and over refinement of control, of power, of arroagance and attitude. Of being of and for all, leaving it to the individual to decide if its for them. Not being bored to death, and made to feel inferior by bombastic size, making up for true sterility. Compensating for a true lack of size, mentally, physically, and especially, spirituality.

Art Collegia Delenda Est
Fine art colleges must be destroyed.
December 7, 2009 at 9:42 AM

Wow, I would have said the complete opposite.