“Rembrandt and His Pupils: Telling the Difference” 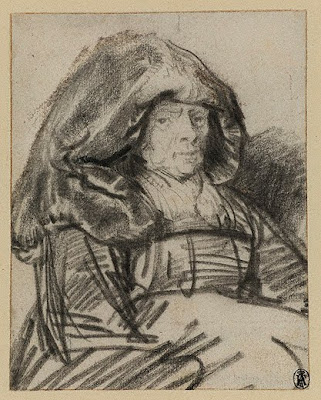 Is connoisseurship taking a populist turn? In the age of wikis and American Idol, it can feel that way. Malcolm Gladwell's 2005 best-seller Blink opens with the saga of the Getty Kouros. The not-so-subtle message is, everyone could see the sculpture was fake — everyone except the Getty Museum's "experts."
Curiously, the Getty's "Drawings by Rembrandt and His Pupils: Telling the Difference" echoes Gladwell's populism. "Can you spot the Rembrandt?" asks an on-line quiz on the exhibition web site. The answer, pretty clearly, is supposed to be "yes." You too will likely leave the Getty Center show convinced you've learned to distinguish Rembrandt's drawings from those of his pupils.
Should you be convinced? Rembrandt had many talented pupils and taught them to draw in his own style. He apparently kept their efforts along with his own drawings. After his bankruptcy and death, the drawings in his studio were dispersed. The art market being what it is, most of them were sold as Rembrandts. Only in the past few decades have scholars cast a skeptical eye at the corpus of 1000+ alleged Rembrandt drawings. It's been slashed by up to 50 percent or so. In the current understanding, the earmarks of Rembrandt's drawing style can be described in a paragraph: 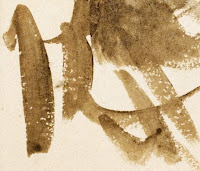 Rembrandt supplied convincing and dramatically effective facial expressions for the main figures in his drawings. He varied technique within a drawing, more detailed in points of interest and more "abstract" elsewhere. The abstract passages include marvelously jazzy calligraphy — an effect that his pupils tried clumsily to emulate. (Right, small detail of Study of Hendrickje Sleeping. If it looks like a Franz Kline, it's a Rembrandt.) Rembrandt was a master of lighting, a human ray-tracing engine who never forgot where the sources of light were in a scene. His students resorted to the manual equivalent of drop-shadow filters. Their modeling was locally plausible; globally incoherent. Old Woman with a Large Headdress, above, from the Courtauld Institute of Art, exemplifies all of the master's qualities.
Because it's possible to put this much into words, it's a safe assumption that Rembrandt did just that, exhorting his students to conform to his stylistic guidelines. These attributes are useful in identifying authorship only because words cannot tell someone how to invent convincing expressions or light. Words can only nag a pupil into trying something he may be uncapable of doing. Some of the neophytes succeeded better than others.
The show of over a hundred drawings leaves the impression that the morass of Rembrandt attributions has been largely cleared up. Not unreasonably, the selection of drawings demonstrates the conclusions of recent scholarship rather than challenging them. It's unclear how many problematic drawings (as in "might be Rembrandt and might not") there are. Only a few such sheets are in the show. While the attributes of Rembrandt's draftsmanship sound simple, they involve complex judgment calls. It that facial expression good enough to be Rembrandt's? For this we have to defer to experts, despite the show's populism. The visitor has little chance to test his eye (not that the show should be a quiz). The Rembrandts are hung to the left of corresponding drawings by students, telegraphing the answer.

Above are details from two sheets of Christ Mocked from. Which would you say is a Rembrandt, given that facial expressions are a tip-off?
If you say the one on the left, congratulations. Your eye is as good as George Goldner's, who bought the drawing for the Getty (below) and who is now chairman of the drawing and prints department at the Metropolitan Museum. But it's not a Rembrandt, it's the work of an unknown pupil. The Rembrandt is the one on the right, in the Morgan Library (or so the experts presently think). 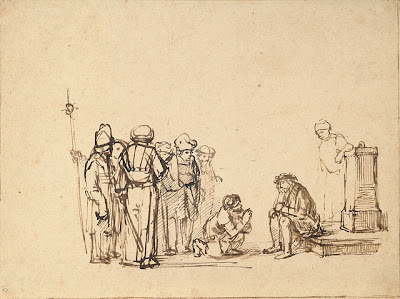 Psychologists speak of an "illusion of validity." We're more confident in our judgments than we ought to be. When a pet theory is proven egregiously wrong, we preserve the illusion of validity by telling ourselves that the pet theory was always obviously wrong. (How could anyone have ever believed the world was flat? I wouldn't have believed that!) Above all the illusion of validity applies to art history, the field "that is rich in adjectives, poor in provable statements" (as former Getty Museum head John Walsh once said).
"Rembrandt and His Pupils" is the best Old Master drawing show ever to hit Los Angeles, and it's not appearing anywhere else.
Email Post
Labels: George Goldner Getty Museum John Walsh Rembrandt