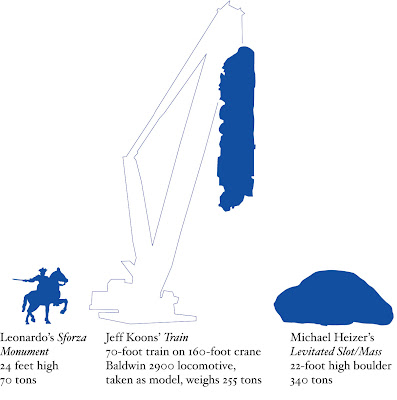 The Getty Center's "Leonardo da Vinci and the Art of Sculpture: Inspiration and Invention" tells the story of art too big to succeed. Leonardo frittered much of his time and genius on envelope-testing equestrian monuments that were never realized. His most outlandish notion was a 24-foot-high bronze statue of Duke Francesco Sforza on a rearing horse. Not only would it have been the biggest statue of the Renaissance, but 70 tons of bronze would have been supported on the horse's two hind legs — in the early drawings, anyway. The invading French army destroyed Leonardo's full-size clay model before it could be cast.
The tale the Getty show tells has resonance in today's Los Angeles. Two artists are planning expensive, logistically challenging outdoor works for LACMA. Michael Heizer's Levitated Slot Mass is to be a pyramidal granite boulder suspended on concrete rails above a pit carved into the northwest corner of the museum campus. Daring visitors will be able to walk underneath the 340-ton rock. Heizer's boulder is nearly as high as the Sforza monument and almost five times its would-have-been weight. With Barnum-worthy bluster, Michael Govan promises that the Heizer will be "one of the largest monolithic objects moved since ancient times."
Despite that, the lion's share of publicity is going to Jeff Koons' Train, a laser-scanned simulacrum of a 1943 locomotive to be suspended from a 160-foot crane and supposedly visible from practically everywhere south of Mulholland Drive. The locomotive alone is 70 feet long (high).
Will Heizer and Koons succeed where Leonardo failed?
Pro: Technology has come a long way since Leonardo's time. There's not much to build with the Heizer: just move a really big rock.
Con: The Great Recession. The Koons seems to have lost momentum, with feasibilty study funder Wallis Annenberg suddenly turning hater ("I personally think Los Angeles deserves a much finer icon than a train hanging from a crane.")
???: Eli Broad loves Koons to death. Does Broad still care what happens in the Miracle Mile?
Email Post
Labels: Getty Museum Jeff Koons LACMA Leonardo Michael Heizer

Donald Frazell said…
Broad can have it. As long as it doesnt cost the tax payers a dime, take it to Grand, no one goes to MoCA anyway, and certainly wont to his newest mausoleum. But no making a joke out of LACMA, and ditch the neolithic Bambam Flintstone preadolescent "concept".

How about this as a conceptual piece, take the train to the top of the BCAM, and let it go. lets see how many floors it falls through, should be far more interesting stuck in the elevator well than collecting pigeon guano on Wilshire. Or anything else in it.

Donald Frazell said…
And besides, the Simon Rodia Towers are ten times bigger, and ten thousand times more important than this pablum.