Greenberg on the Beach 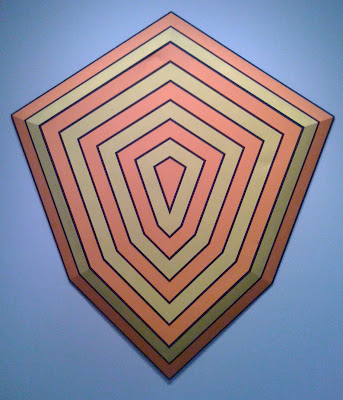 Clement Greenberg is not known as a champion of L.A. art. How many remember that the quintessential critic of the New York School curated two exhibitions of So. Cal-only contemporary art: "Artists of Los Angeles and Vicinity" at the Los Angeles County Museum (1960) and "Sixth Annual Southern California Exhibition" at the Long Beach Museum of Art (1968)? Yes, Mr. Cultureberg found time for Long Beach. This history is glancingly recalled at the Long Beach Museum, now celebrating its 60th anniversary (and financial near-death experience) with a museum-wide, MOCA-style installation of a rarely seen permanent collection. One of Greenberg's picks was purchased out of the 1968 show: Nick Boisvert's It Hurts So Bad I Could Care (above).
Greenberg's best-known L.A. effort was LACMA's 1964 "Post-Painterly Abstraction." Greenberg is said to have selected all the artists except those from California, who were chosen by LACMA curator James Elliot. (As if California were Uranus.) "Post Painterly Abstraction" included Emerson Woelffer and Sam Francis, who were nevertheless behind its curve. It omitted the "Four Abstract Classicists" of the more prescient 1959 show at the Los Angeles County Museum. (Greenberg said of John McLaughlin: "There is something oddly Oriental at work here.")
According to the Long Beach Museum, Greenberg selected "only 17 percent" of the entries for its 1968 show. That statistic speaks volumes of a world before MFA-mills and the Internet. Picky as he was, Greenberg chose scores of artists who have subsequently managed to elude the attention of the New York critical establishment and, in some cases, Google spiders. As to Boisvert, he's still an artist, producing views of Western landscapes that Greenberg surely would have damned as kitsch (below, The Desert Tramps, 1979). Intentional or not, Boisert's Roadrunner pinnacles and canyons flip a middle finger at Greenberg's flat picture planes. 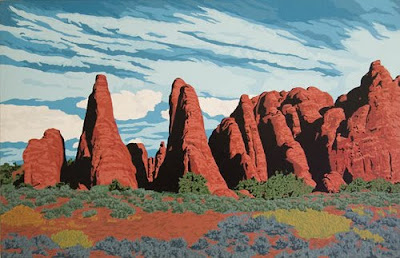