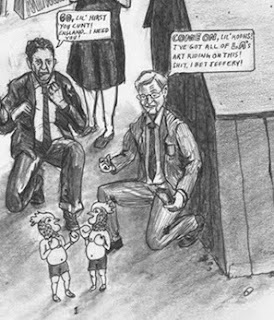 Grand Avenue is Eli Broad's "first choice" for his new museum, according to Martha Welborne, managing director of the Grand Avenue Committee, in the Architect's Newspaper. A Broad spokesperson says they're still considering three locations, however.
Should Grand Avenue pan out, it would qualify as Jeffrey Deitch's first big win. Until Deitch started lobbying for the site, it sounded like the contest was between Beverly Hills and Santa Monica. A Grand Avenue site would be good(ish) news for those who think we need critical mass more than far-flung buildings. MOCA California Plaza is just across the street, creating what could be a one-stop contemporary art complex. The Geffen is a confusing 2-mile round trip hike from California Plaza, discouraging same-day visits. A Broad-MOCA proximity ought to facilitate future collaborations and loans. (Pictured, nano-detail of William Powhida and Jade Townsend's Hooverville, with Charles Saatchi at left and Broad at right, saying: "I've got all of L.A.'s art riding on this! Shit, I bet Jefferey!")
Broad hasn't publicly repudiated an earlier bet. Not so long ago, he promised that LACMA could take its pick of his collection — and that any museum wanting a Broad Foundation loan would have to clear it with Michael Govan first.
Email Post
Labels: Charles Saatchi Eli Broad Jade Townsend Jeffrey Deitch Michael Govan MOCA William Powhida