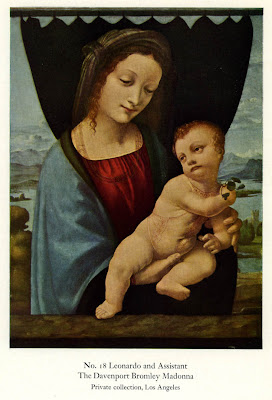 The Getty Museum's "Leonardo da Vinci: The Art of Sculpture" is not the first Leonardo show to touch down on the West Coast. The Los Angeles County Museum in Exposition Park managed a "Leonardo da Vinci Loan Exhibition" for six charmed weeks of midsummer 1949. It had 101 objects, almost four times the size of the Getty show. And that's not counting 66 modern models of Leonardo's scientific inventions (which "may be handled and operated by visitors") nor a selection of books from UCLA's Belt Library. The 1949 blockbuster's star-studded list of patrons included "Prof. Albert Einstein," Thomas Mann, Aldous Huxley, California Governor Earl C. Warren, and William Randolph Hearst.
Hearst provided much of the impetus for the show. In 1945 Los Angeles Museum director Roland McKinney wrote Hearst, "It is my hope to establish… an art section comparable to the museums of the east." Hearst, resident in his eponymous Castle at San Simeon, began donating art. It was well known that Hearst despised modernism (and was still smarting from that classic of modern film, Citizen Kane). An expert in Old Masters, the German-born William Valentiner, was recruited to curate the collection and solicit further donations. Valentiner came west with misgivings. In his estimation, L.A. was "the furthest point of western civilization," and its museum's small art collection was "deplorable."
Though Valentiner was deeply engaged with German modernism, he had to walk on eggs to avoid offending Hearst and the post-war tea partiers who figured abstraction = communism. In his exhibition program Valentiner mostly stuck to the classics and aimed high. The museum did loan shows of Rubens and Van Dyck (a double retrospective), Goya, Renoir, and Van Gogh. But the biggest and most ambitious project of all was Leonardo.
Only about 15 to 20 Leonardo paintings survive. No comparably famous artist is nearly so rare. There are twice as many Vermeers.
"The current exhibition," Valentiner wrote in the catalog, "the first comprehensive one held in this country, must necessarily be limited in scope as far as original paintings are concerned…" His solution: wall-sized photographic reproductions of unobtainable masterpieces. Make that black-and-white reproductions.

"With the exception of Rembrandt, Leonardo's paintings lend themselves better to black-and-white reproductions than those of other great masters… Care has been taken that these photomurals do not exceed the size of the originals because variations in proportions and dimensions would give a false impression to the spectator who might never have seen the actual works themselves. Even the best reproductions will always lack the surface quality of the original, which transmits to us the pulse and spirit of an age. The art-loving public is right in demanding original works in order to enter into the true atmosphere of the great past. It was the endeavor, therefore, to include in the exhibition as many original paintings a possible…"

The show boasted five Leonardo paintings… if you believe the catalog. One of the five, the Davenport Bromley Madonna (top), was from an unidentified L.A. collection. "…the soft shadow and the utmost refinement in the modeling of the Virgin's head indicate Leonardo's participation in this exquisite work," collector and art historian William E. Suida wrote. Incidentally, the painting had been rediscovered by another storied connoisseur, William Valentiner. 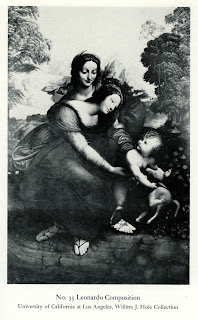 Outpost of civilization or not, L.A. was suddenly awash in ambitious attributions to Leonardo, Boltraffio, and Foppa — in Valentiner's opinion. One, an early copy of Leonardo's St. Anne, the Virgin, and the Christ Child with the Lamb in the Louvre, was lent by UCLA. Donated by Willis Hole, it's still at UCLA and rarely shown. The copy has been romantically attributed to Salai, Leonardo's romantic friend and muse. But that's an unfalsifiable claim, given the lack of certain Salais for comparison.
Duveen Brothers lent Valentiner the Madonna of the Pomegranate, presumably for sale at the right price. Barely 6 inches high, the catalog touted it as Leonardo's earliest surviving painting.
The catalog's list of donors gives shout-outs to the Valley (Carl S. Denzel, Northridge, Calif.) and the red states (Mr. and Mrs. Frank Buttram, Oklahoma City, Okla.) Multiple Leonardoesque works were flushed out of New York collections, and several donors were from the Detroit area. Valentiner had headed the Detroit Institute of Arts and had lived in New York. That was the pattern: Wherever Valentiner lived, he discovered works from Leonardo's circle, or convinced local collectors to buy them. 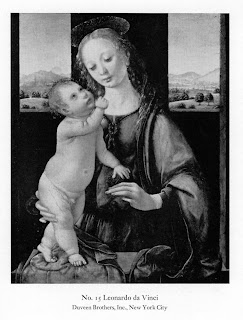 From our vantage point, Valentiner's Leonardo show is a cautionary tale in the fluidity of attributions. Valentiner was and is one of the most respected art historians of his time. Yet not one of Valentiners's five "Leonardos" pass muster as an original Leonardo today. That's worth pondering even as the odd Michelangelo or Raphael still turns up now and then. 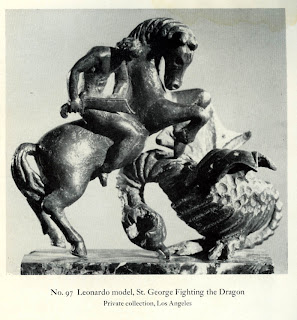 Even in 1949 it was appreciated that no certain Leonardo sculpture existed. The Exposition Park show had to make do with a mere five "sixteenth century bronze casts after Leonardo's models." Only two were from private collections in Los Angeles.
Email Post
Labels: Getty Museum LACMA Leonardo Los Angeles County Museum William Randolph Hearst William Valentiner

Donald Frazell said…
I agree that Leonardo is the easiest artist to reproduce in black and white and still get something from it. He was all line, his color was basically irrelevant, and compositions as opposed to structure of colors, lines and forms obvious. Plus as he was always experimenting, his colors tended to start to fade immediately, as both La Gioconda and the Last Supper did, his fresco actually falling apart.

He was actualy the first science fiction inventor and illustrator, none of his contraptions and ideas ever actually worked, and neither did his paitings. He was not scientific, but always wanted to come up with things his own way, whether they worked or not. His drawings are incredible, perhaps the best draughtsman ever, but his paitings are grossly overrated.

Line is purely mental, it is independant, and lacks the cohesive nature and passion of color. Which is why the neo-clasicists hated it, though Ingre's was incredible in its subtlety. As his line was decorative and not as classic as he claimed. True artists do resolve supposed contradictions,a and are often so themselves.

Leonardo makes one think,but thats it, as he never actually fulfilled his ideas, they were fiction. Michelangelo is the one who actually did and created the variety of art that lived on, from sculpture to architecture to painting to fortifications.

This voracious need to find Leonardo's is quite strange, its like fools gold, always seeing thngs that truly aren't there. I simply enjoy his drawings, the rest, academic Leprechauns gold, it keeps em busy and writing treatises, what could be better than something that isn't really there. The possibilities are endless, and so irrelevant.

It really is time to save the Watts/Rodia Towers, and tear down the Ivories. Hear that Getty? Stop going to outer mongolia and silly spiral jetties and get to work in your own backyard, this is important, not environment changng and destroying absurdist self glorifying rock blasted rock.

i will have the possibility for the Music of the America's pavilions at the towers on my blog soon, you have it Getty. Get to work.
March 26, 2010 at 9:48 AM