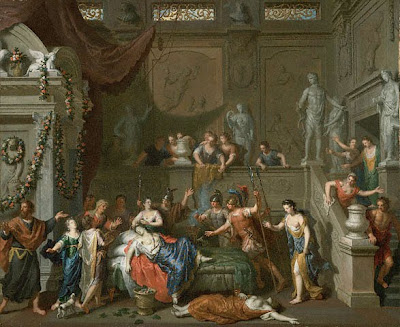 The Getty Museum has bought the long-lost pendant to a painting that's been in its collection since 1969. The new painting, The Death of Cleopatra, is by the Dutch classicist Gerard Hoet (1648-1733). It is the same size as a related Hoet that J. Paul Getty bought, The Banquet of Cleopatra (left). 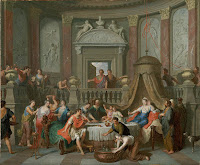 Though Banquet is one of several autograph versions, Death of Cleopatra was recognized as its mate when it was auctioned in 2008. The Getty bought it last year. Hoet once owned another Getty painting, Saint John the Evangelist by Frans Hals. The Hals was acquired by a modern Cleopatra, Catherine the Great, before entering the Getty collection in 1997.
Email Post
Labels: Catherine the Great Frans Hals Gerard Hoet Getty Museum J. Paul Getty