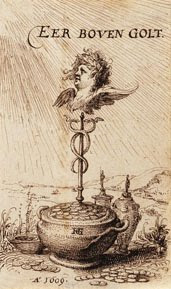 Logically enough, the largest collection of European drawings in the West is housed in the region's oldest museum. The part that might not be so logical is the location. It's neither L.A. nor San Francisco but Sacramento. Through March 29, you can sample a few of the Crocker Art Museum's riches in a one-room show at the Huntington, "The Golden Age in the Golden State: Dutch and Flemish Prints and Drawings from the Huntington and Crocker Collections." It's the quirkiest of the flurry of nano-exhibitions built around the Getty's recent Rembrandt drawing extravaganza.
Much of Judge Edwin B. Crocker's wealth came from the same source as the Huntington family's: the Central Pacific railroad. Crocker had the good fortune to be the brother of Charles Crocker, one of the "big four" of Western railroad barons. It was Charles who hired the coolies to build the Central Pacific at slave-labor wages. Touch of irony there — brother Edwin was an abolitionist, chair to the new Republican Party. After Lincoln's election, Edwin was appointed California's Supreme Court Justice. He served for seven months before retiring to a more lucrative post as chief legal counsel to his brother's railroad.
Crocker's legal career came to a halt in 1869, when he suffered a stroke that would leave him paralyzed (though wealthy) for life. Crocker promptly took his family on a two-year European grand tour, buying art for a new house-museum being constructed in far-away Sacramento. Most Americans of the age would have made a beeline to Paris. With the Franco-Prussian war looming, the ailing Crocker prudently made Dresden his base of operations. He bought paintings, and he must intended them to be his legacy to future Sacramento art lovers, if any. (The town's population was barely 16,000.) The paintings Crocker bought are a bizarre melange of forgotten painters and schools — Bohemia? Sweden?? 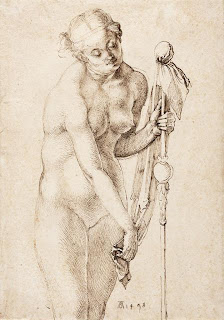 Most important and mysterious is the stunning group of old master drawings that Crocker acquired. The track record of Gilded Age autodidacts buying art in Europe is not encouraging. Despite that, and without a known adviser, Crocker amassed nearly 1400 sheets. That's about twice what the Getty has acquired in nearly 30 years. The Crocker drawings are overweighted in minor 19th-century Germans, yet include amazing works by Carpaccio, Correggio, Fra Bartolomeo, Pordenone, Giulio Romano, Durer, Rembrandt, Boucher, Fragonard, David, and Ingres. (None is in the Huntington show, though. Right, Durer's Nude Woman With a Staff.)
Crocker's widow didn’t consider the drawings important enough to mention in her founding bequest to the city of Sacramento. The drawings were just there, along with the wainscotting and plumbing fixtures.
The most remarkable work now at the Huntington is Hendrick Goltzius' hand-drawn personal emblem, Honor Above Gold (top left). There are a couple of notable Dutch landscape drawings, weirdly enough by Simon de Vlieger and Jan van Huysum (otherwise know as painters of seascapes and flowers). 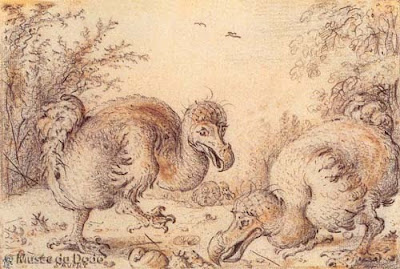 Absent is perhaps the most reproduced work in the Crocker collection, a Roelandt Savery, the only drawing of the now-extinct dodo bird from life (above). Dodos lived on the island of Mauritius, Savery worked for Emperor Rudolf in Prague, which city the Crockers might have visited — but the drawing is in Sacramento. The Huntington is showing a drawing of an elephant by Savery's nephew, Jan, who worked the same natural-history vein.
In October, the Crocker debuts a new Charles Gwathmey-designed expansion. It will include a new Anne and Malcolm McHenry Works on Paper Study Center and an exhibition of highlights of the Crocker drawings and prints.
Email Post
Labels: Albrecht Durer Crocker Art Museum Hendrick Goltzius Huntington Library Rembrandt Roelandt Savery