The Unbearable Wrongness of Palm Trees 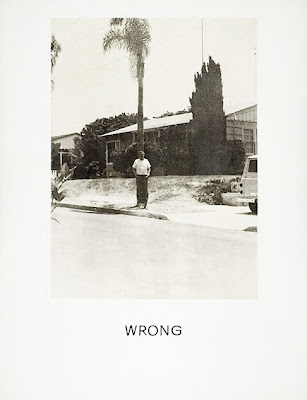 Imagine a world in which everything is the exact opposite of what it is. That's the prolific algorithm behind much modern fiction, used by writers as different as Lewis Carroll, Jorge Luis Borges, and Philip K. Dick. Anyone wanting a visual equivalent should see "John Baldessari: Pure Beauty," a 150-object survey now filling the second floor of LACMA's Broad Contemporary Art Museum. In his text paintings of 1966-1968, Baldessari upturned the rules of composition, technique, and taste. (Above, LACMA's Wrong.) One might think that the use of a palm tree in Wrong was incidental. In fact the LACMA show traces Baldessari's use of palm tree imagery over four decades. Why palms? 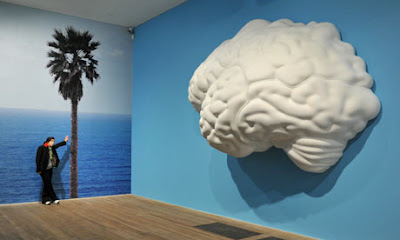 "I like banal images and I can’t think of anything more banal than a palm tree and an ocean," Baldessari said, speaking of his room-sized installation Brain/Cloud. The role of palms in Baldessari's art is something like the bowler-hatted gents in Magritte, a deadpan embodiment of everyman's taste. In North American culture, palms appear in photos of vacation destinations, of tropical "paradises," and of Hollywood. They symbolize unintellectual hedonism. Palm trees are culture-free, despite growing in Rome and figuring in Old Master interpretations of the Flight into Egypt. There are palms in Gauguin's paintings, though not nearly so many as you might think. Gauguin was equally entranced by the unfamiliar forms of pandanus and breadfruit. Not many palms are to be found in the "Eucalyptus School" of idyllic California landscape painting, either. 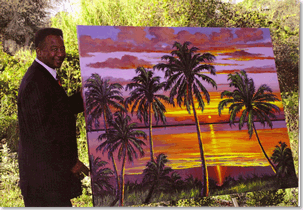 The equation of palms with paradise cannot be too much older than the "Mad Men" and Highwaymen (pictured, Highwayman James Gibson with a torrid Florida landscape).
At times, palms have been an embarrassment to the more high-minded Angelenos. During the long gestation of the Getty Center, the leadership agonized over whether to have palms on the campus, in no small part over concerns about what New Yorkers would think. The Getty folks ended up giving palms the pollice verso. Baldessari represents the next phase in the evolution of an oppressed minority. Hip-hop used the n-word, gays called themselves queer, and Baldessari made L.A. art with palm trees. The palm trees were intrinsically "wrong" subject matter, discomforting to East- and West Coast viewers. The LACMA venue of this traveling show adds yet another layer of nuance. Under ex-New Yorker Michael Govan, LACMA has reverted to palm tree boosterism. In a 2009 piece in the Huffington Post, Govan or his web minions wrote that "the palm tree has become a powerful cultural object, an iconic image that has drawn legions of people to a beguiling version of paradise." 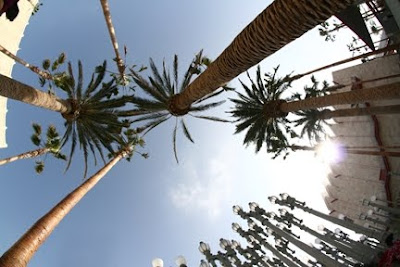 That sentiment finds expression in Robert Irwin's palm garden at LACMA, an apparent irony-free zone. The "curated" palms now butt against Chris Burden's Urban Light. The streetlights even look a little like palms, stark and sociopathic, with a fillip on top. 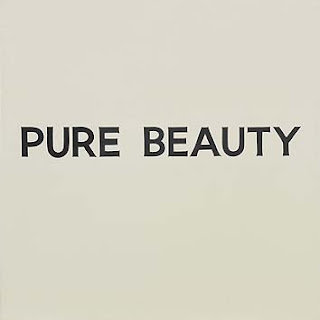 Donald Frazell said…
Thats becaauuse Baldesari doesnt know california, he only watches Hollywood illusionist crap, and purveys it as art. Palms are not native to SoCal, but neither are eucalyptus nor Italian cypress. California is oak, until the north when it becomes Redwood.Palms can be great, its how you use them, and the lACMA ones are fine, but rather unimaginative and without rhythm, just a solid beat like pop music hitting you over the head til you kinda get hooked.

Some people need to get out more, and explore our beautiful state, rather than sit in sterile white cubes all day watching TV. I have photographed every corner of it, and palms only in tacky palm Springs area, but also date farms, til exploding in popularity from water shortaages lately. When coming back from my first extended stay in gray NYC, i finally appreciated the palm tree.

But I am an oak, of teh earth, not teh flippant naked palm of Beverly Hills with faux French homes and tacky doric columns. Nor robber baron Broads dull and lifeless McMansions. my home has a canary island pine, oleanders, fruit trees, bouganinvellea, and yes, even two thick desert palms. mostly mediteranean, but with the beautifully sculpured palms also. Baldessari is jsut a boring old fool who fooled teh rich with his games, they are too jaaded to be passionate, so he is perfect for them. And so miss the solidity andn strength of our native oak. And ridicule all they dont understand, for that is all conceptualists do, wallow in their own "cleverness' because they know nothing. And take pride in their ignorance, playing weak word games instead of feeling with the eyes, or soul. And so of course, not artists at all.

Anonymous said…
minor correction, there is a palm native to california. and, the irwin installation is fantastic. if you know palms or take the time to appreciate the differences in his selection you know there are many "beats" to this garden. perhaps it won't have mass appeal bc a garden with one tree family can be difficult to appreciate while cruising to the next building but, the subtlety and nuance is what won me over. i just hope the climate accepts them in their current configuration.
June 29, 2010 at 12:38 PM

Donald Frazell said…
There are many homes here in the LBC with amalgations of different palms, both tropical and desert. Built in much more interesting and sensual designs than the obvious logic of lACMAs. Landscaape is an artform in itself, and artists aare not good at it, leave it to the gaardenreers, who know the plants, their structures, and habitats. my two palms fit with the avacado, lime and lemon trees behind the garage, but not with the oleander and bougainvellea or pine and olkive out front.

By the way, Matisse has palms in his Blue Nude, souvenerir of Biskra, and Paul Klee used them often too. haardly taaacky, though hollywod nad its purveyors of mediocre illusion most certainly are.
June 29, 2010 at 6:04 PM

Anonymous said…
I asked my grandparents in the 60's, who came here from the midwest, what it was, that was so fascinating about palms, myself being born here. They told me that it was because most of America didn't have palms, and they were very indicative of here. Hollywood used the palms to make it look like a faraway exotic place, and if you ever see any 30's and 40's media clips from any of the studios, they really made it look luxurious here.

Anonymous said…
Contrary to believe palm trees are not native to Los Angeles or most of Southern California! The only place they grow native in Southern California is in small pockets of the desert 2 to 3 hours east and south of Los Angeles where mountain spring water from high above reaches the desert floor. So yes Palm Springs and 1,000 palms are areas where they're actually native. So all the absurd palm trees you see planted throughout Los Angeles, San Diego, Orange County, Ventura and Santa Barbara and parts of the inland empire are all non-native. Planted there for some sort of ridiculous reason to trick people into thinking they're somewhere tropical or in if you've really been to places like that you will understand the Stark difference! Trees native to California should be represented more often. Pine trees, redwoods, California sycamores and oaks. That's the real California!
February 12, 2022 at 3:42 PM