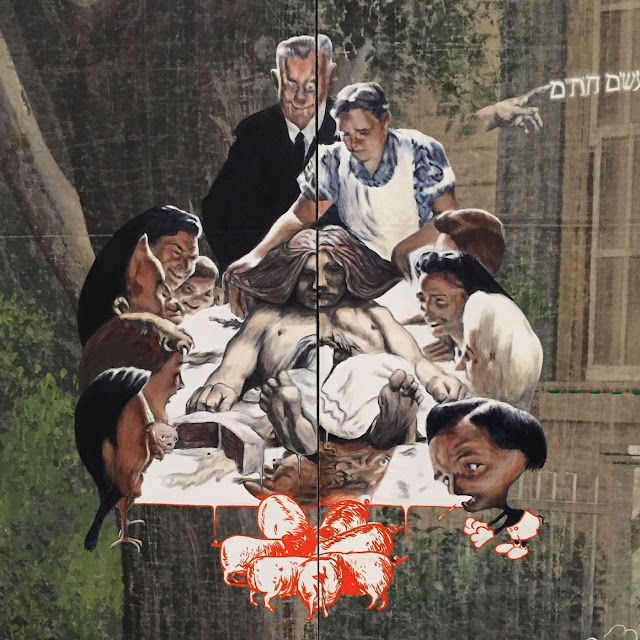 The Marciano Art Foundation opened to the public Thursday. With it Los Angeles now has four major contemporary art museums. (At top, a small detail of a Jim Shaw intervention of a Masonic backdrop, after Norman Rockwell, Mantegna, etc., etc.)
The building, Wilshire's Scottish Rite Masonic Temple, was designed by painter Millard Sheets with under-credited help by actual architects. It has been sensitively re-adapted by Kulapat Yantrasast. Today's building has 55,000 sq. ft. of exhibition space, meaning that it's a bit larger than the Broad.

It's a very different space from a typical museum, with no large windows or overhead lighting. (The Masons didn't care for nosy neighbors.) There are essentially four floors, one a mezzanine. Most of the art is on the top (third) floor. The first-floor Theater Gallery holds "Jim Shaw: The Wig Museum." The Philipp Kaiser-curated collection survey, "Unpacking: The Marciano Collection," spans all four floors. The "Relic Room," a museum-within-the-museum of Masonic artifacts, is on the Mezzanine. There's a bookstore (open) and a planned coffee shop (not yet). Entrance is via a small sculpture garden.

Shaw's Wigs. The best possible raison d'être for the Marciano is "Jim Shaw: The Wig Museum." Shaw has never had a major museum show in L.A., despite living here for 47 years. The Marciano made it happen.

It's an installation rather than a retrospective, as ambitious as anything an established museum could have done. For one thing it takes advantage of the three-floor high space, with 40+ ft. ceilings. Shaw also draws on the Masons' cast-off theatrical backdrops and wigs. 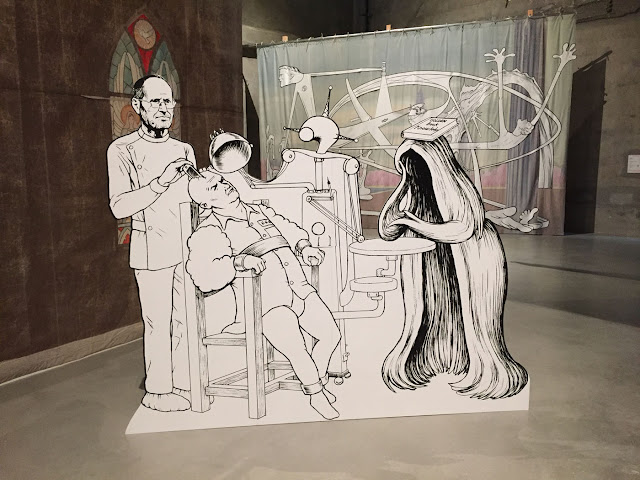 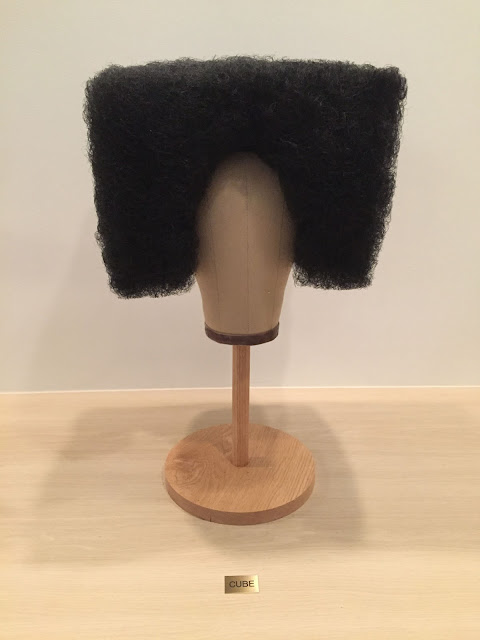 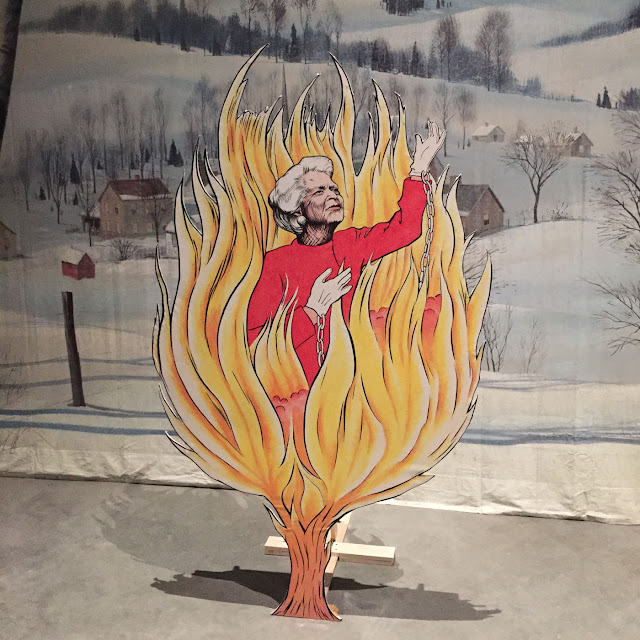 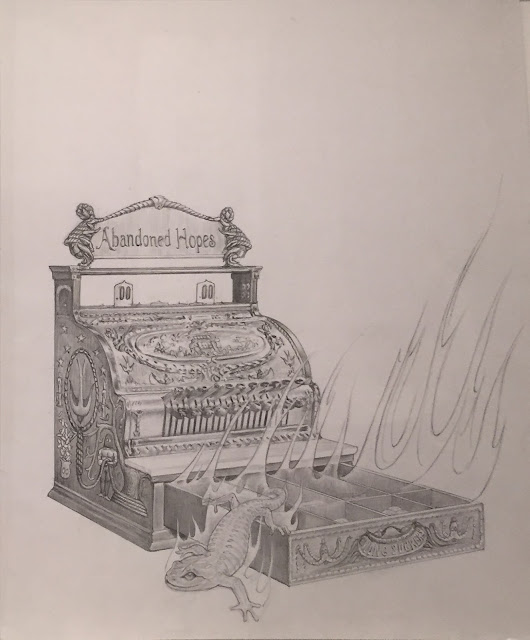 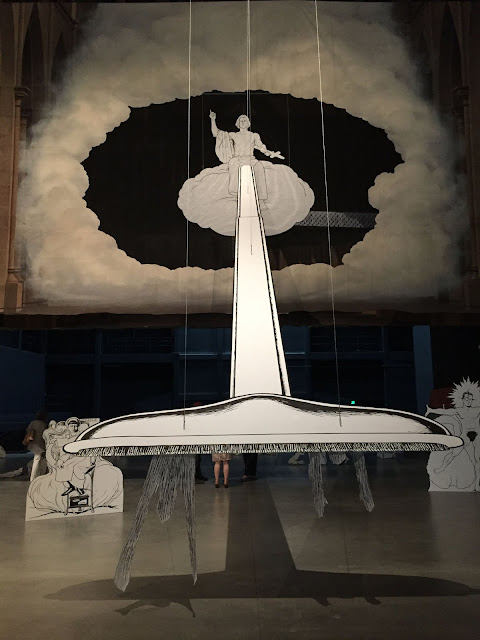 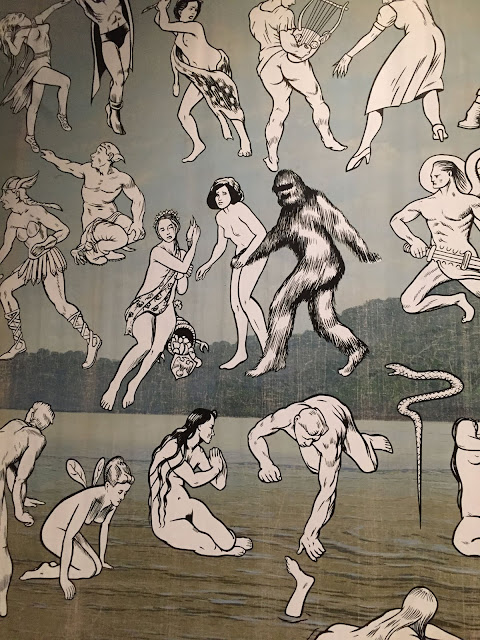 Unpacking the Collection. As shown here, the Marciano collection is serious and museum-worthy. Kaiser's selection is a set of juxtapositions of artists held in depth. There are over a hundred works by 47 artists. That means it's about 7 percent of the collection (by objects) representing about a fifth of the collection's artists.

All the artists on view have reputations, but not all get much museum exposure. In general the Marciano seems more open to L.A. artists, and younger/less market-validated artists, than the Broad is. There are blue-chip artists who came to attention in the last decades of the 20th century, but most of the art was made since the Marcianos began collecting about 2006. One of the first works you see is a large Cindy Sherman in faux-Masonic costume, dated 2010.
Set a Spell. The Marciano's hillbilly benches are the coolest seating in any local museum. 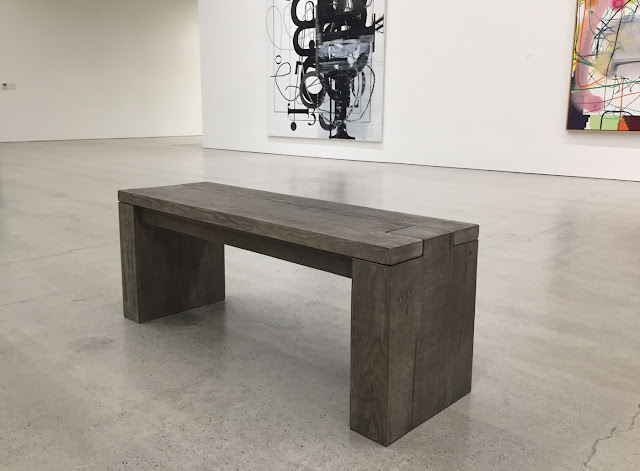 Seeing Double. I wasn't too creeped out by Broad overlap. But those wanting to see Glenn Ligon's Double America twice can now see it at the Marciano and at the Broad. 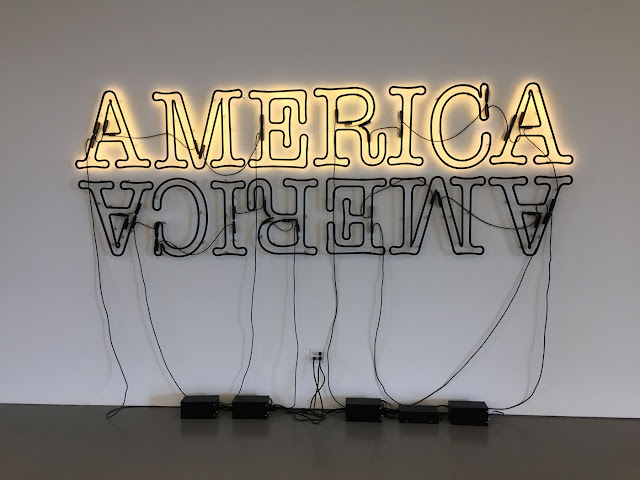 Black Box. This space, on the first floor and sharing the 2-1/2 story ceiling with the Theater Gallery is awesome. It's a steampunk white cube painted Aliens-franchise black. It presently shows Adrián Villa Rojas' Two Suns (II), 2015, a horizontal replica of Michelangelo's David. 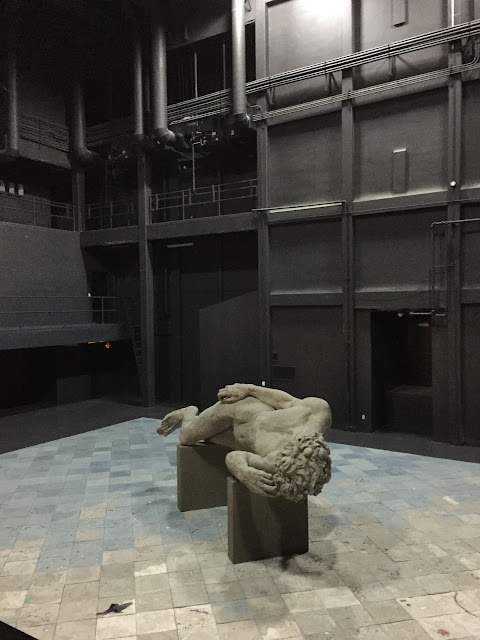 Balcony. A small balcony on the third floor offers views of the Gatsby-esque neighborhood just half a block from Wilshire. 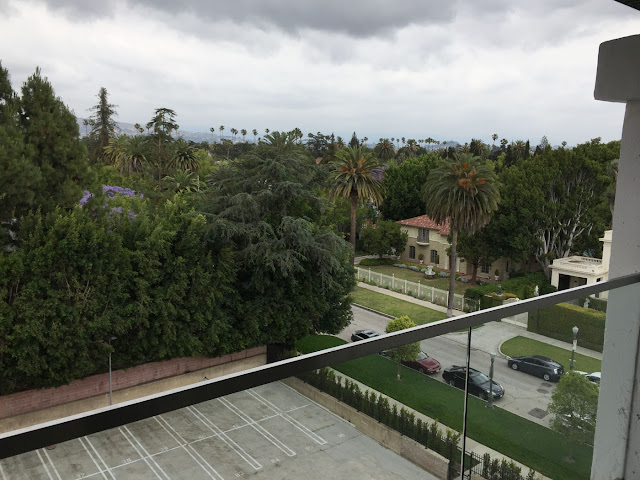 Millard Sheets and Alex Israel… are two of my least favorite artists. Both get acres of wall space! I feel sorry for Sheets, though, whose ditzy woodland mosaic is blocked by a white-cube wall, holding an El Anatsui. You can go behind the wall to view the Sheets, but the tesserae are three feet from your face. You mainly see the glare from the overhead lighting. (Shown is a small detail of a fox that I managed to capture by holding my cellphone above my head.) 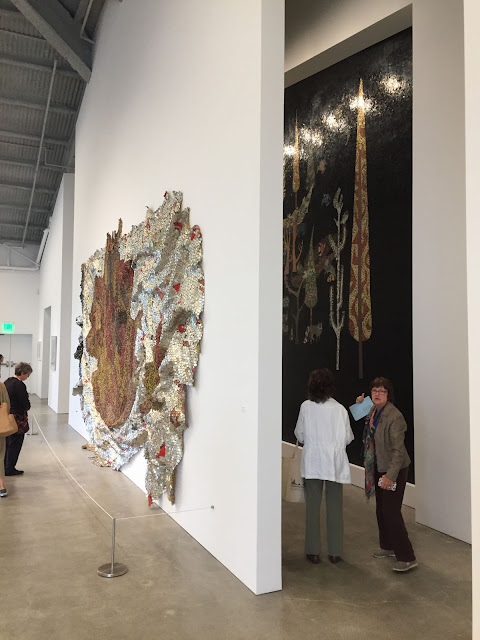 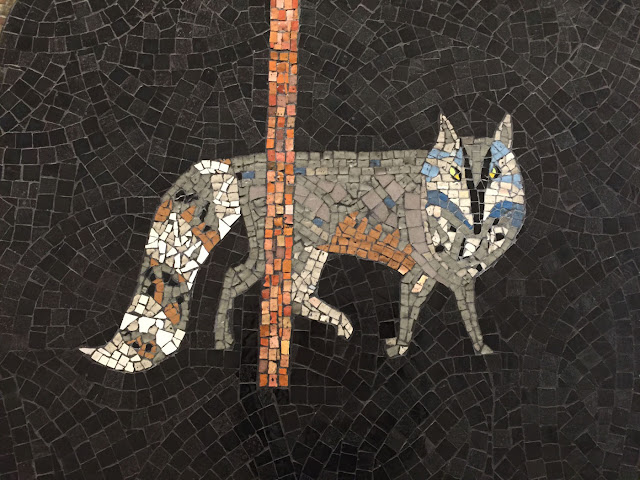 There is also a Sheets painted mural in the bookstore, partly obscured by books. 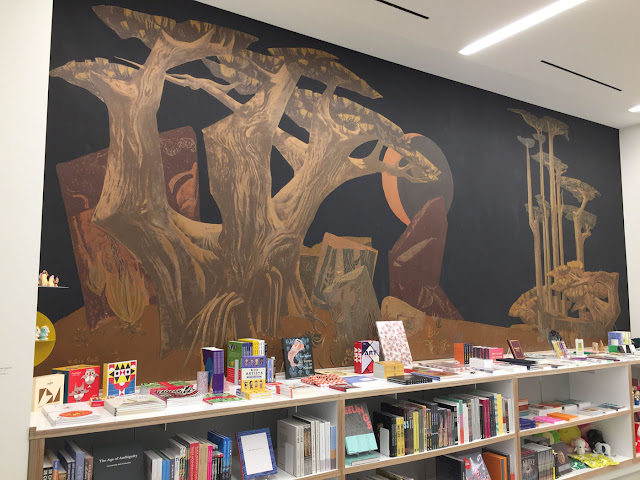 Israel has a mural, Validated Parking, covering the whole Mezzanine. It's nothing that a white wall and a few El Anatsuis can't fix. 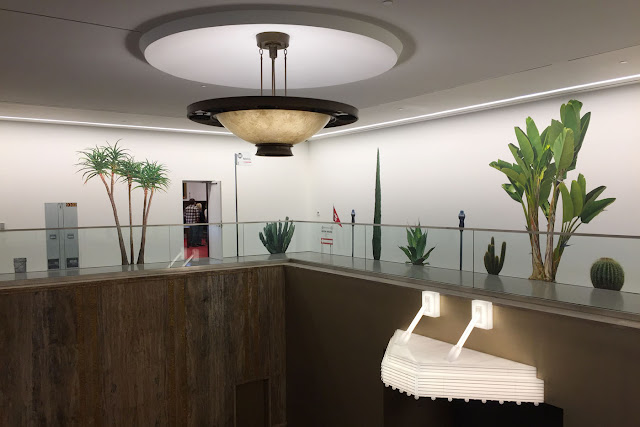 Sculpture Garden. It's a Thomas Houseago, a Franz West, and a Carol Bove in a Zen sea of concrete, walled from the street, with borrowed views of greenery. There's room for a lot more, but the three work well. Actually, they join Sheet's architectural sculptures of the Masons' two-headed eagle. 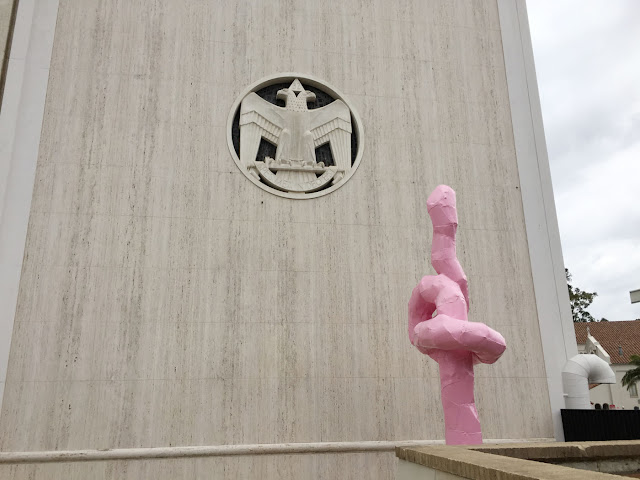 Cultural Appropriation. Shaw describes his use of Masonic wigs as "a metaphor for the inevitable decline of wig-bearing Masonic and Anglo-Saxon power." The Marciano keeps piling on to that theme. The second floor has Lizzie Fitch and Ryan Trecartin's Ledge (2014), a 6-channel video installation of slackers trashing the Masons' building. And if you're not sure who the Masons are, the bookstore sells Freemasons for Dummies. 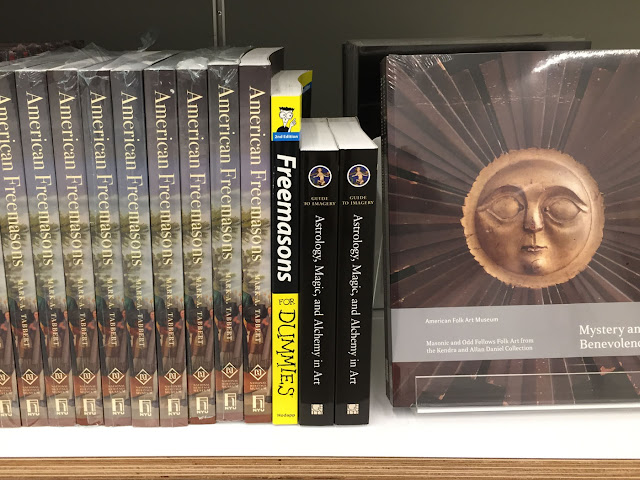 How much goofing on the Masons is too much? The Masons, whose membership included Mozart, George Washington, and Walt Disney, were once the white guys who ran the world. Now, not so much. This passing of glory is the theme of the Relic Room, an installation that could fit seamlessly into the Museum of Jurassic Technology. 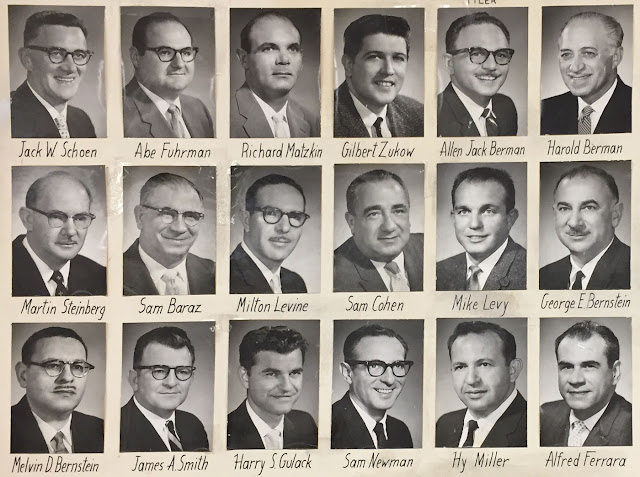 Going by the surnames, many of the Wilshire Temple's members were Jewish. (Conspiracy theorists from Adolf Hitler to Alex Jones have linked the two groups.) Many of the objects in the Relic Room seem like cast-off toys, shabby and sad in contrast to the building's grandeur. One alarming display is a set of polychrome busts, evidently used as reference models for black-, brown- and yellow-face theatricals. 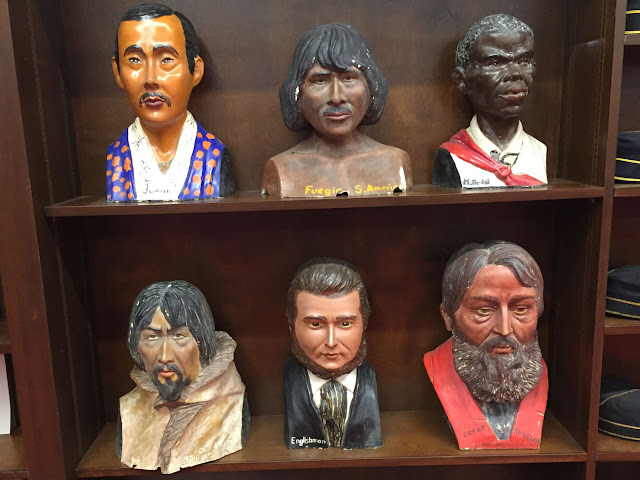 Scalability. I'm not sure how scalable the Marciano is, as they say in Silicon Valley. It's great to have a museum of right now, unburdened by art history. But even ten years from now, we will look at the objects now on view in different ways. They will have entered a long glide path towards history, or obscurity. Fifty years from now, it's hard to imagine the logic of a museum devoted to one decade (c. 2006-2017?)

Is the Marciano collection intended to grow? If so, it will gradually become a historical collection like the Broad or MOCA. Maurice Marciano has said, "We don't need another MOCA or Broad or Hammer Museum." He implies that a "foundation" is more flexible than a museum, in giving artists such as Shaw free reign to create ambitious installations. OK… this doesn't sound so different from what MOCA and the Hammer do.

The building is one thing that makes the Marciano unique, but I don't see that "responding to the building's history" is an evergreen curatorial premise. Dia Beacon doesn't ask artists to respond to the legacy of Ritz Crackers.

The Marciano is free, but timed reservations are required. The next block of dates, for July, will be available on the website June 1 at 1 PM. There is no standby line. 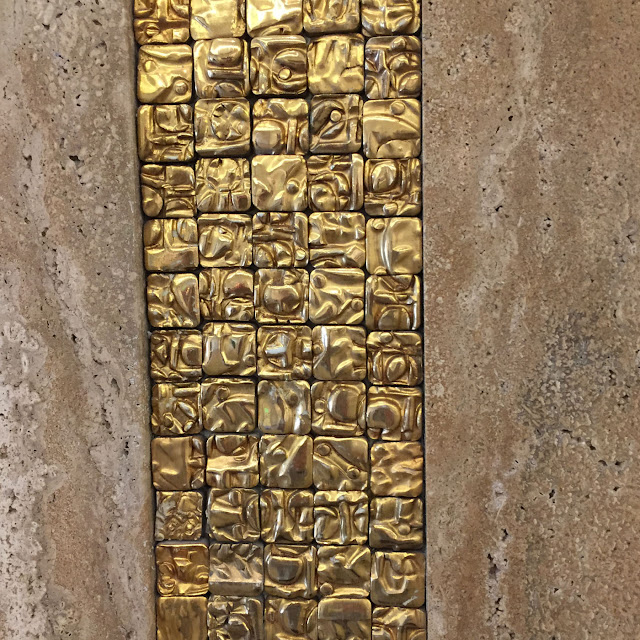 Anonymous said…
It's probably coincidental that the Jim Shaw work parodies a Norman Rockwell canvas now owned by George Lucas. A painting that will presumably be installed in Lucas's future museum at a site several miles away in Exposition Park.

If the Marciano and Broad are a bit too avante garde for certain people's tastes, Lucas's museum will be quite an antidote to that.

William Poundstone said…
Lucas doesn't own that one, "Freedom from Want." It's in the Norman Rockwell Museum in Massachusetts.
May 27, 2017 at 9:32 AM