George Tooker was a magic realist who admired the monumentality of Piero della Francesca and worked in tempera. He is associated with Paul Cadmus (Tooker's sometime boyfriend), Jared French, and Margaret French. This complicated menage summered in Fire Island, Provincetown, and Nantucket, swimming against the abstraction riptide of the New York school.

Tooker is the subtlest of this band of outliers. Bathers dates from the apex of his career, the same year as The Subway in the Whitney Museum. In these and a handful of other claustrophobic genre scenes, Tooker finds mid-century alienation as his medium and message. Life is an anxious beach.
Painter Albert Herter is less known than the Herter Brothers, the Gilded Age furniture firm co-founded by his father, Christian Herter. Albert became a Beaux Arts painter, illustrator, and muralist (for the Los Angeles Public Library, among many other institutions). The profile of Woman With a Fan draws on quattrocento precedents.

A nameplate on the back of the Huntington painting identifies its subject as "Miss Maude Bouvier." That would be the grandmother of Jackie Bouvier Kennedy Onassis; also the mother/grandmother of "Big Edie"/"Little Edie" Bouvier, of Grey Gardens notoriety.
If the nameplate is accurate. It is not original to the painting, and the art market has a habit of faking celebrity IDs for unknown sitters. Herter spent time in the Hamptons near the Bouviers in the early 1890s. About 30 years after Woman With a Fan, Herter did a double portrait of twins Maude and Michelle Bouvier in flapper-era finery. I wouldn't say either sister looks a day older than the Woman With a Fan. But who knows? It's a society portrait.

Maude Bouvier would appear to be some relation to Marge Bouvier Simpson, whose husband and son feature in an animated sitcom's homage to George Tooker's The Subway. 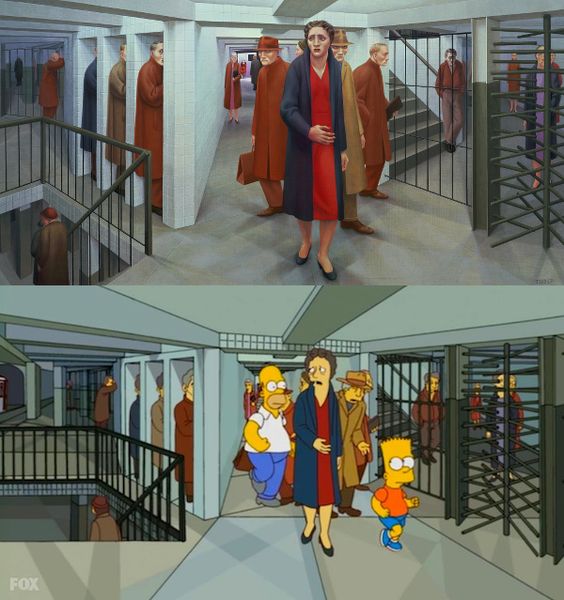 The Huntington's American department has been on a roll lately. In the past year it has bought or been given major works by under-recognized modernists who have come to the forefront of smart attention: Charles Reiffel, Agnes Pelton, Henrietta Shore, Lee Mullican—and now Tooker.
Email Post
Labels: Albert Herter George Tooker Huntington