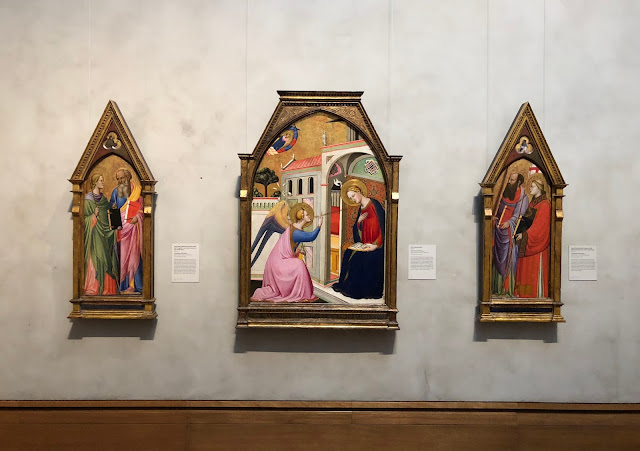 Bob Jones Sr. was a radio evangelist who hated Darwin, modern art, and interracial dating. J. Paul Getty was a hedonist billionaire who hated spending too much money for art, oil leases, and ransoms. The wealthy Jones and the much wealthier Getty were art collectors at the same time, each scraping the bottom of the bargain bin for Renaissance art. Both collectors' museums came to own panels by the mid-rung Florentine Gothic painter Tommaso del Mazza (formerly the Master of St. Verdiana, active 1377–c. 1400). The Getty is now displaying them together.

That's because it had been theorized that the Getty's Tommaso Annunciation was the originally the center of an altarpiece, with the Bob Jones panels as wings. In recent years the three panels were cleaned and brought together for close looking. The verdict: Nope. The construction is different enough to make a common origin unlikely.