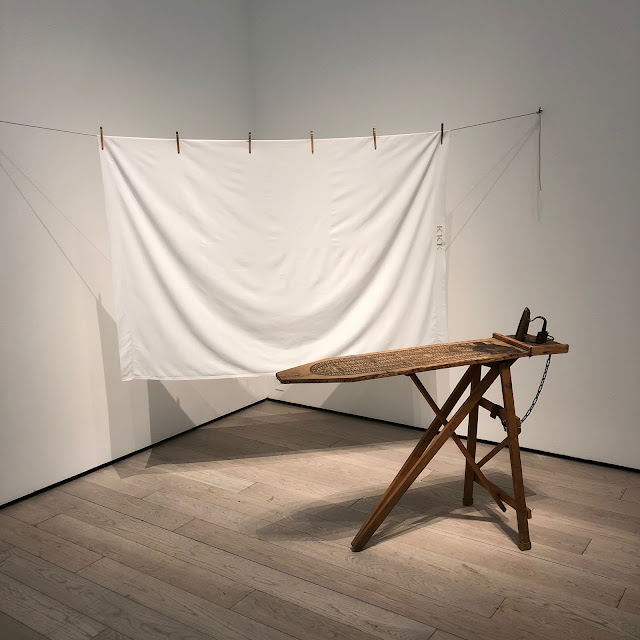 Women's work ruled LACMA's 2018 Collectors Committee. That began with Betye Saar's I'll Bend But I Will Not Break (1998), the first work acquired in the museum's annual weekend buying binge. Saar's ironing board is a slave ship; the white sheet is a bitter pun on Raphael Peale's Venus, monogrammed with the initials of the Ku Klux Klan. The purchase came with a buzz-worthy extra. LACMA is organizing a long-overdue Betye Saar show. "Betye Saar: Call and Response" is to open in the Resnick Pavilion in 2019. It was Lynda and Stewart Resnick who supplied the funds to buy I'll Bend But…

Ultimately all ten of the works offered to the committee were acquired. Six of the ten are by women artists (and 6 of the 7 contemporary lots are). The amount raised is reported as over $3.1 million.

For those not familiar with the process, the Collectors Committee is composed of museum supporters who pledge money to a pooled fund for buying art. LACMA curators make Kickstarter-like pitches for potential acquisitions. Committee members vote, and artworks are purchased in order of popularity, until the collective bankroll is exhausted or (as happened this year) everything is bought. Patrons can dedicate special funds to buy favored works, guaranteeing their acquisition and taking them out of the voting queue. That happened with the Saar and with a kinetic sculpture by Argentinian artist Martha Boto.
The most expensive work acquired is a Ruth Asawa wire sculpture, something LACMA didn't have. As Decorative Arts and Design curator Wendy Kaplan acknowledged, Asawa's prices have soared since the artist's 2013 death. Another "hyperbola" sculpture recently sold for a price reported to be over $2 million. LACMA's work, Untitled S.027 (1954), is of similar market value but was offered to the Committee for $900,000, thanks to an anonymous donor. 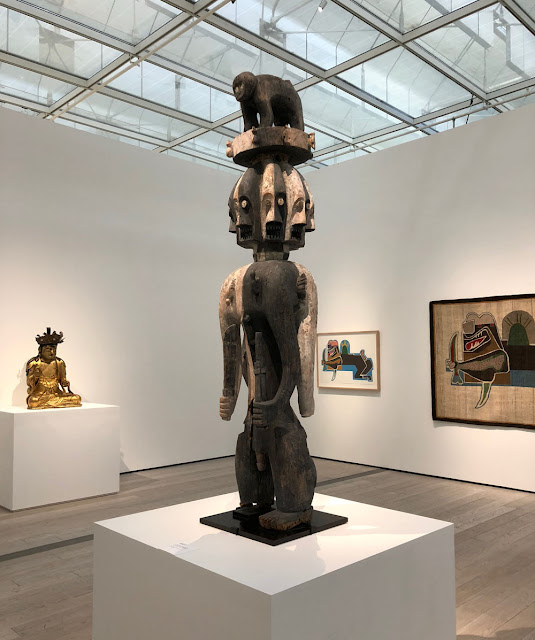 It was a good year for African art, a weak area of LACMA's collection. The Ijo culture Forest Spirit Figure (19th century) is over seven feet high, with seven heads, two bodies, and a leopard on top. It surely becomes the star of LACMA's evolving collection of sub-Saharan art. Consulting African art curator Polly Nooter Roberts rates it "the most imposing and expressive of all known examples" of its type. It's from the L.A. collection of Edwin and Cherie Silver and has been featured in exhibitions at LACMA and the Fowler. The Silver family offered it for $298,000, a fraction of the estimated $1 million market value. 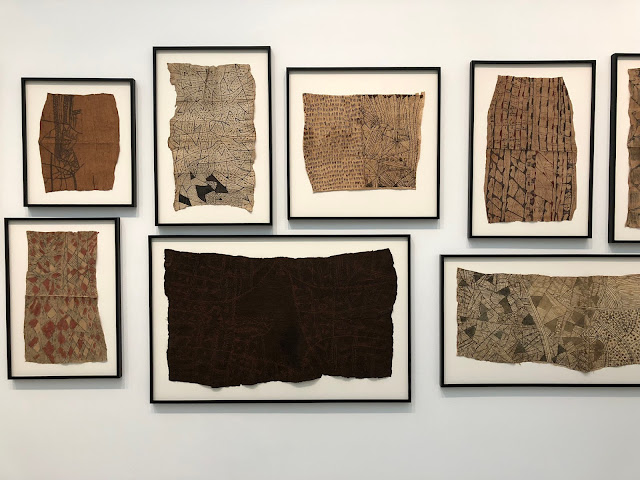 Sharon Takeda presented a collection of 29 Mbuti Ceremonial Barkcloth Paintings (20th century) for her Costume and Textiles department. They were made to be worn, on special occasions. Museums show these objects on walls, as "paintings." While Mbuti men make the cloth, it's the women who paint it. Most of the LACMA works were published by scholars Georges Meurant and Robert Farris Thompson and date from 1950 to the 1970s. 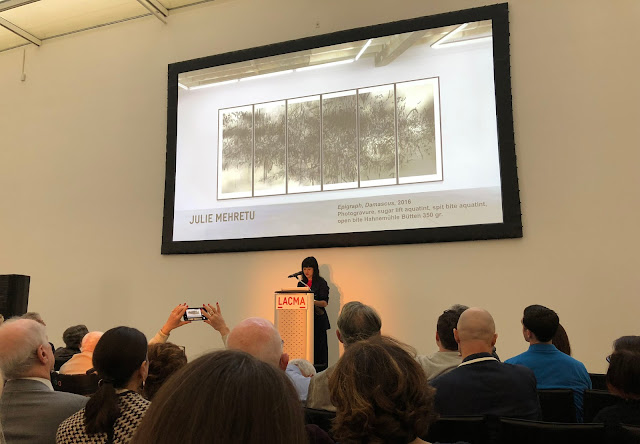 More or less "African" is a monumental print by Ethiopian-born New Yorker Julie Mehretu. Contemporary Art curator Christine Kim presented Epigraph, Damascus (2016), a six-panel photogravure/aquatint said to be the last of its edition. 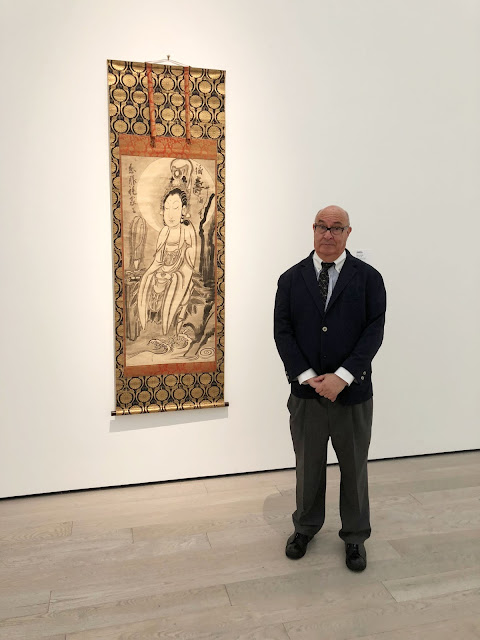 Japanese Art curator Robert Singer is the most consistently successful of Collector's Committee pitchers. This year he offered a Willow Kannon scroll painting by Zen master Hakuin Ekaku (c. 1760). Singer called it the "capstone, the ultimate masterpiece" of his three-decade effort to acquire Zen painting for LACMA. The bold brocade mounting is unusual for a Zen painting. Singer points out that the 16-petal gold chrysanthemum was the exclusive trademark of the Emperor during the Meiji era, implying an imperial provenance. Willow Kannon came with a unique incentive: Collector Murray Smith, who gave the museum its great Hakuin Daruma, pledged to donate a further group of Zen works, contingent on the Committee buying the Willow Kannon.
The earliest of the ten purchases is a rare gilt-wood Bodhisattva Mahasthamaprapta from Joseon dynasty Korea, 17th century. Stephen Little presented it as a nexus-to-be of the museum's collection of Korean Buddhist art.
All recent Collectors Committees have bought works of contemporary Middle Eastern art. This year the collectors bought two rugs and two related prints by Iranian artist Parviz Tanavoli. They, along with a number of previous Collectors Committee acquisitions, will be featured in "Fields of Empty Days: The Intersection of Past and Present in Iranian Art," opening May 6, 2018.
Latin American Art curator Ilona Katzew clinched her presentation for Martha Boto's kinetic sculpture Optique Hélicoidal (Mouvement) (1967) with a film clip. Boto was part of an Argentinian invasion of the Paris art world. Her sculptures were featured in a Serge Gainsbourg(!)-directed sci-fi music video, Contact! (1968). For its moment, it must have been something like Solange's Metatronia. Gainsbourg juxtaposes Boto sculptures with Brigitte Bardot as a trippy extraterrestrial, and resistance is futile.


UPDATE. As I was quasi-live-tweeting the Committee weekend, I wrote, "Wendy Kaplan's pitch mentioned the skyrocketing Asawa market and how this may be now or never. And Carol Eliel commented on the anomaly/scandal that a major Betye Saar is a relatively reasonable $96,000."

Tyler Green (@TylerGreenDC) commented: "Re the Betye Saar: If I was curator at any other art museum in America, I would read this, walk to my director's office and tell him/her that we should be buying, not just one piece, and now."
Email Post
Labels: Betye Saar Brigitte Bardot Hakuin Ekaku Julie Mehretu LACMA LACMA Collectors Committee Lynda Resnick Martha Boto Robert Singer Ruth Asawa Stewart Resnick

Anonymous said…
Great purchases! It's a shame LACMA doesn't have a robust acquisition fund, but the Collector's Committee definately compensates for that. I'm especially excited about the Ruth Asawa sculpture (LACMA's first by the LA artist!!), the African and Buddhist sculptures, and my personal favorite -- the Martha Boto kinetic piece. That Bridgette Bardot film clip is so hypnotic and memorizing!!!
April 23, 2018 at 8:47 AM

Anonymous said…
The fact the museum has long been stuck with a paltry amount of money for purchasing artworks is another reason why the Peter Zumthor/Michael Govan plan to knock down most of the existing museum and start from scratch is so extravagant and probably quite foolhardy. LACMA for decades has never had enough funds to even finalize the remodeling and renovation of its existing buildings, including things like the Times Mirror Court.

Do past funders like Times Mirror still even exist in today's Los Angeles?

I hope the slash-and-burn approach to the museum won't end up being a case of "it was necessary to kill the patient in order to save him."
April 24, 2018 at 7:08 AM

Anonymous said…
While I'm not a fan of the Zumthor project, I do believe the existing buildings should be demolished -- just with a different design than the one proposed. The current buildings are too mismatched in architecture and style and give the visitor a rather a maze-like experience. Also, the buildings are literally falling apart and have horrible lighting. Consolidating most of the buildings into one will push LACMA into world-class status. However, the current proposed redesign is just awful. Why is Govan so fixed on having all art displayed on one floor when the trend in LA is to be vertical and dense? Also, the current design is too exposed to light, which will harm some of the light-sensitive works. Lastly, is this thing ever gonna be built?!!
April 24, 2018 at 8:20 AM

Anonymous said…
The only good thing about the demolition and rebuilding of LACMA is it's supposedly a contingency that Jerry Perenchio wrote into his major gift to the museum over 3 years ago. But since he passed away last year, I wonder if his bequest really will be lost if the museum gains financial-operational sanity and tries a more sensible approach to redoing the campus.

If people like him and David Geffen legitimately do care about the cultural health of the city, they hopefully won't ultimately leave LACMA - because of a love of new!, new!, new! - in a weakened condition.

Look at the way the far more financially strong Metropolitan has been unbalanced since taking over the Whitney Museum's former building.
April 25, 2018 at 12:50 PM