Lucas Is Mystery Buyer of a Notorious Rockwell 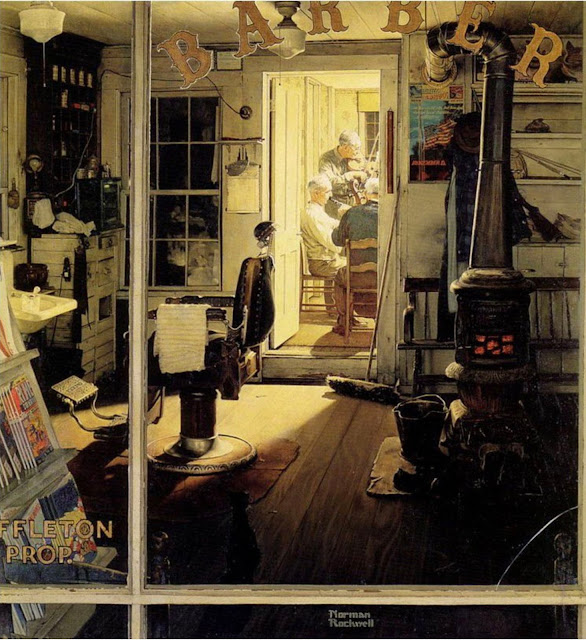 The Lucas Museum of Narrative Art has announced it was the buyer of Norman Rockwell's Shuffleton's Barbershop (1950), a painting sold by the Berkshire Museum in a controversial deaccession.

Lee Rosenbaum, who has followed the Berkshire Museum case on her CultureGrrl blog, observes: "This means that Don Bacigalupi, president of the deep-pocketed museum, now has the dubious distinction of being the enabler of not one but two transactions bankrolled by megabucks patrons (here’s the other one) that have been deplored by museums’ professional organizations."
Email Post
Labels: Lee Rosenbaum Lucas Museum of Narrative Art Norman Rockwell

Anonymous said…
The Rockwell painting (or "illustration") makes me think of the reason why I'm glad the Hammer Museum is planning a special exhibit of an artist from generations ago instead of just the recent past.

Looking at contemporary art displayed in Westwood or at the Broad in downtown, or MOCA across the street, or in mid-Wilshire, or in the Arts District, etc, after awhile becomes somewhat of a giant blur. It also takes less time to scrutinize canvases of mainly large fields of plain color compared with more detailed, figurative artworks.

The Lucas won't be to everyone's tastes. But it will certainly help create greater balance in the local scene between the figurative and non-figurative.

Anonymous said…
A precursor to the Lucas Museum was the Hartford Gallery in New York, which opened in 1964. It made a point of having no abstract art: