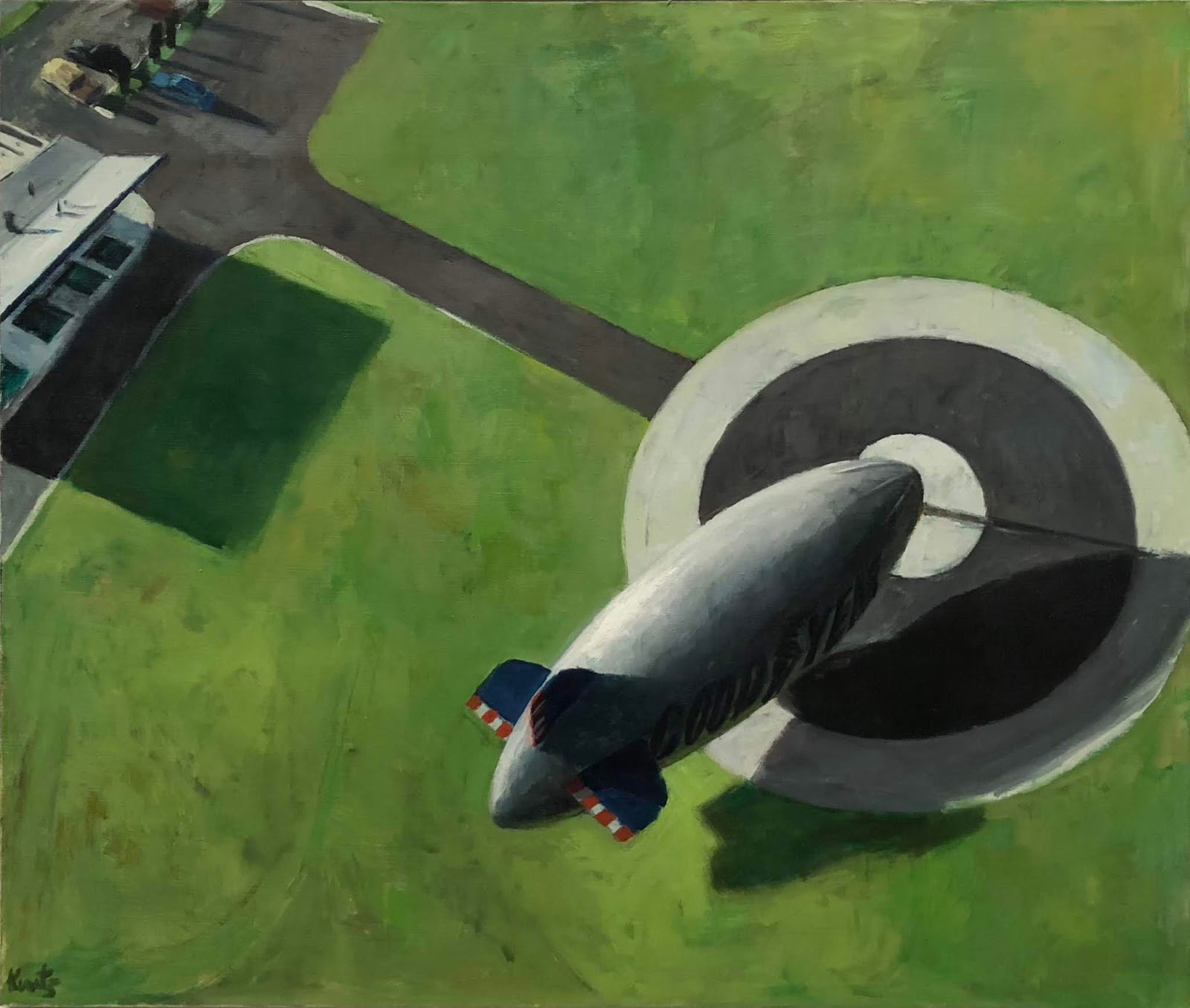 UC Irvine is showing a small sample of the Gerald Buck collection of California art, recently bequeathed to the university by the O.C. collector and real estate developer. Buck's little-seen collection, renowned for its quality, will be the nucleus of a new museum to be built on the UCI campus, the Institute and Museum for California Art. (At top, Roger Kuntz's Goodyear on Target, 1970.)

"First Glimpse: Introducing the Buck Collection" lives up to the mystique. As organized by curators Kevin Appel, Stephen Barker, and Cécile Whiting, it's 50 good to superlative works by 50 big names of California modernism (split between two campus galleries). Many of the works show an artist trying something a little daring, while at the top of his or her game. The Kuntz is one of his blimp paintings (and one of his riffs on Jasper Johns' targets). The Buck collection has a more iconic Kuntz freeway painting, but they're showing the blimp.
Scope. Buck considered Richard Diebenkorn's Albuquerque #2 (1952) to be the heart of his collection. Like the Kuntz it's a Western landscape of sorts. Buck had started collecting early 20th-century plein-air landscapes but moved towards abstraction and social themes. As shown here, the Buck collection is Diebenkorn's contemporaries: the So. Cal and No. Cal avant garde from the 1930s (Agnes Pelton) to the early 2000s. The more recent pieces are late works by artists who were active decades earlier. The selection spans L.A. Hard Edge Abstraction and Bay Area Figuration; Light and Space, Assemblage, and Pop. "First Glimpse" shows Peter Alexander, Ruth Asawa, Larry Bell, Karl Benjamin, Jay DeFeo, Tony DeLap, Viola Frey, Oskar Fischinger, Llyn Foulkes, Frederick Hammerley, Jess, Craig Kauffman, Ed and Nancy Kienholz, Lee Mullican, David Park, Wayne Thiebaud, James Turrell, and Peter Voulkos. No existing Southern California museum has such a consistently strong representation of West Coast modernism.
It's all painting and sculpture, save for drawings by John Altoon and Ed Ruscha. There is a relatively strong contingent of women for the mid-century period. Though the artists are nearly all white, modest-size pieces by Carlos Alamaraz and Ed Bereal are first-rate.
Magic. A significant number of the objects in "First Glimpse" rank with the artists' very best. I'd put the Lorser Feitelson Magical Space Forms in that category. No less magical is a tiny 1962 Billy Al Bengston painting has become my all-time favorite work of an artist I didn't think I liked that much. (My iPhone is unable to capture the out-of-gamut colors.)
Also in the photos-can't-do-it-justice category is Helen Pashgian's Blue Secret, 1994, another instant-fave I never knew existed.
The 3150 Works Not on View. "First Glimpse" will fuel rather than end speculation about the Buck collection. It reveals a mere 1.6 percent of the collection by number of objects.

It's said that Buck's collection ranges from Eucalyptus School to Shepard Fairey. Normally a 3200-piece holding would skew towards works on paper. Buck collected drawings but only two are in the show (and no prints or photographs). Could there be hundreds of paintings and sculptures? A thousand? Your guess is as good as mine.

Barker says that over 500 artists are represented in the collection. Clearly it spans a lot of lesser-known figures. Buck collected in depth: The collection has 10 or more works by Carlos Almaraz, John Baldessari, Larry Bell, Bruce Connor, Llyn Foulkes, and Helen Lundeberg.
The Future Museum. The UCI Magazine (Spring 2018) has some information about the planned museum I haven't seen elsewhere. Stephen Barker, Dean of the Claire Trevor School of the Arts, says that an architect and a curator could be chosen by January 2019. "We'll probably select a California design firm because this is a museum of California art." (That will please the many who questioned an earlier statement about a worldwide design competition.)

The museum, which will show the Buck collection as well as the Irvine Museum collection of California plein-air painting, is expected to be about 100,000 sq. ft, with 45,000 sq. ft. of exhibition space. That's nearly the size of the Broad.

That museum must be years away. In the mean time IMCA will be moving to an 16,000-sq. ft. interim facility on the campus. That would itself be a major upgrade, allowing UCI to show the Buck and Irvine Museum collections more properly and to inaugurate a program of loan exhibitions. The intention is to produce three shows a year.
Logistics. Hours for "First Glimpse" are Tue.-Sat., noon to 6; until 8 on Thursdays (through Jan. 5, 2019). The closest parking lots are 5 and the Student Center Parking Structure, but they're often full on afternoons. Be prepared for a hike from a more distant lot. "First Glimpse" occupies two spaces, the Contemporary Arts Center Gallery and the University Art Gallery. Make sure you see both; there are no signs informing visitors that the exhibition continues in another gallery.

Unknown said…
Saw "First Glimpse" with my wife last week and it was a great experience to view images we'd only seen as book reproductions come to life. MY particular favorite was Richard Diebenkorn's "Albuquerque." While on campus, visitors should take a small walk over to Maya Lin's "Water Table" as well. All in all the exhibition was terrific.
Mark Leysen
October 11, 2018 at 6:37 PM