Termite Man and the White Elephant

Who needs another art super-hero? That's the question posed by "Manny Farber and Termite Art," Helen Molesworth's parting show for MOCA.  Farber, a film and art critic as well as painter and UC San Diego educator, described termite art in in a 1962 essay in Film Culture, "White Elephant Art vs. Termite Art." The tl;dr summary is that it's art that doesn't try too hard to be a masterpiece (that would be its antithesis, "white elephant" art). Farber's text speaks mainly of movies (and creepy biological analogies), even while insisting that "the best examples of termite art appear in places other than films."

"A peculiar fact about termite-tapeworm-fungus-moss art is that it goes always forward eating its own boundaries, and, likely as not, leaves nothing in its path other than the signs of eager, industrious, unkempt activity.…

"termite art aims at buglike immersion in a small area without point or aim, and, over all, concentration on nailing down one moment without glamorizing it, but forgetting this accomplishment as soon as it has been passed; the feeling that all is expendable, that it can be chopped up and flung down in a different arrangement without ruin." 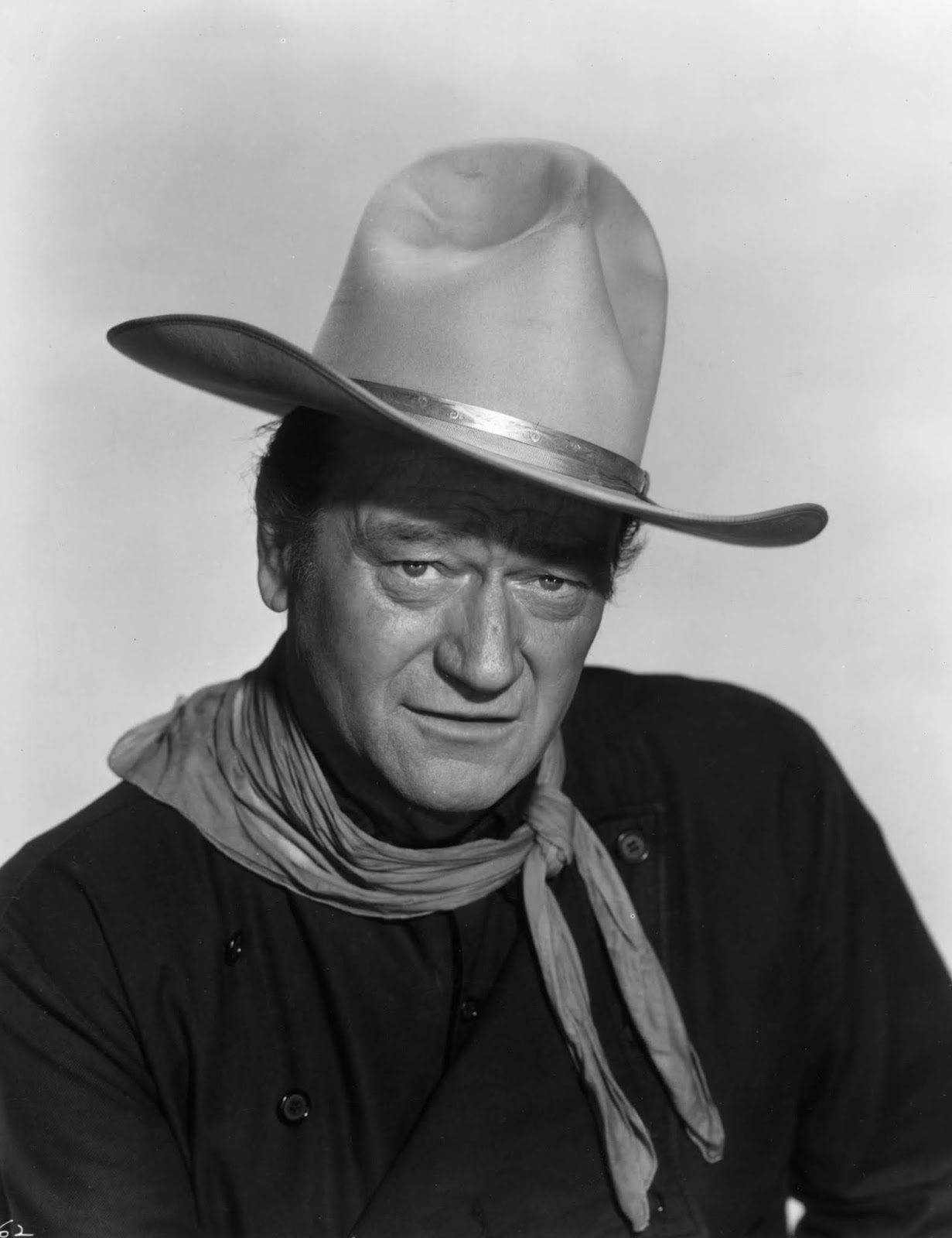 So… according to Farber, termite art is John Wayne in John Ford's The Man Who Shot Liberty Valance; Laurel and Hardy in Hog Wild; and Kurosawa's Ikiru. When Farber applies his terminology to art-art, he mainly talks about what termite art is not. Motherwell, de Kooning, and Warhol are not termite art. Cézanne and Citizen Kane are cited as combining elements of termite and white elephant art, and Mel Blanc's voicing of Porky Pig is mentioned in connection with Truffaut (a white elephant filmmaker). 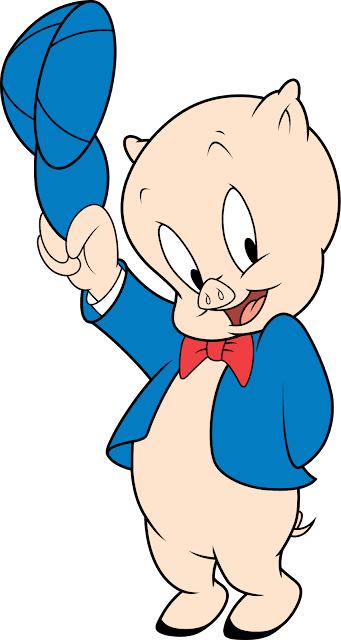 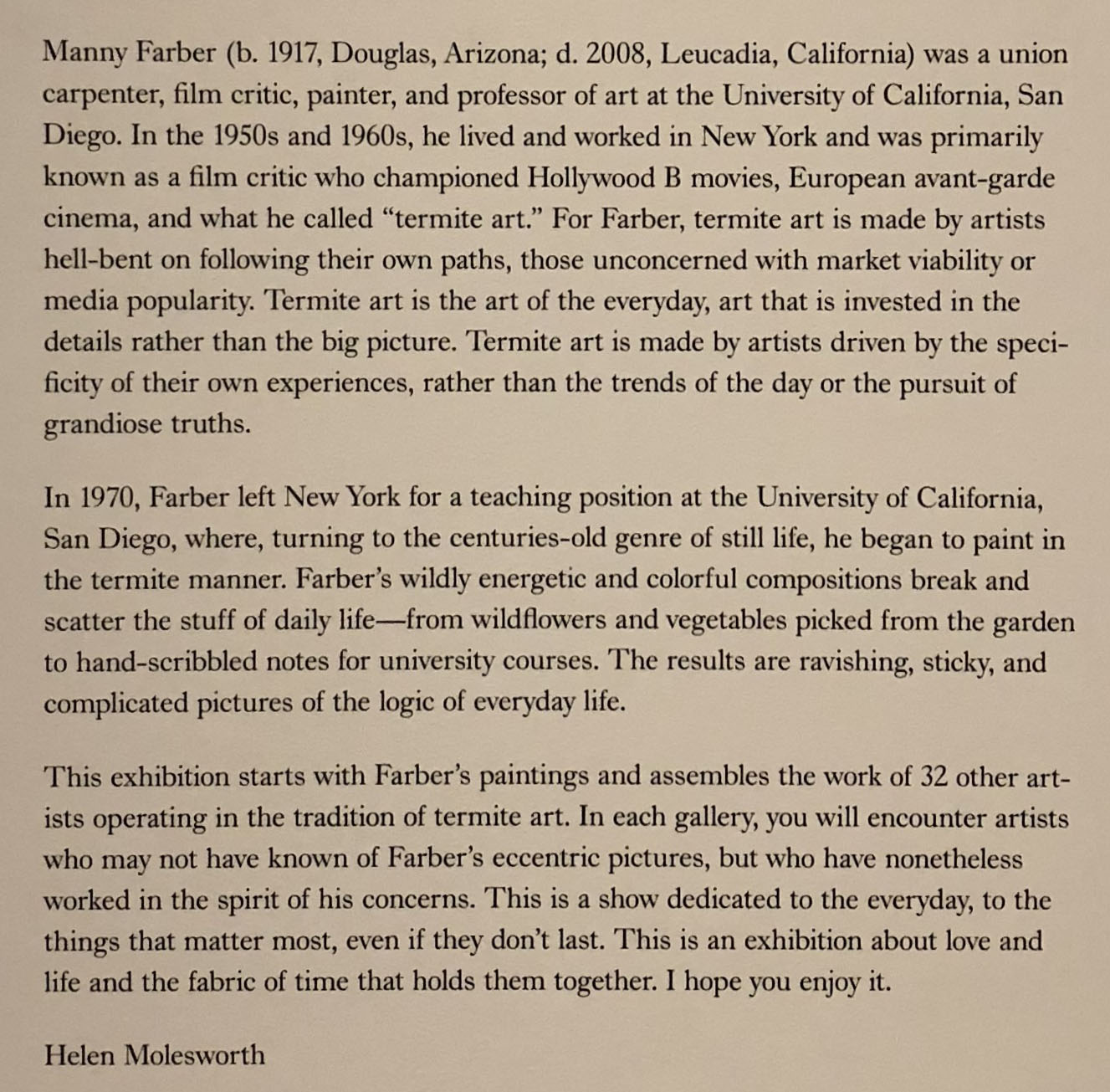 Actually, the introductory gallery text explains termite art more accessibly than Farber's essay does. I mention that because of how rare it is to have intelligible labels for theory-driven exhibitions of contemporary art. Molesworth "signs" the text, as a kind of valedictory.
"Manny Farber" is a big show, occupying the Grand Avenue building save for the permanent exhibition rooms. I had expected it to be a group show built around the "termite art" concept, with only token representation of Farber himself (who didn't strike me as hip/woke/market-validated enough to be on MOCA's A-list.) As realized, the show offers a substantial survey of Farber's work, all drone's-eye Pattern & Decoration-inflected still lifes. There are also paintings by Farber's wife, Patricia Patterson (who was influential in Farber's use of color) and works by Farber's UC San Diego students, such as Lorna Simpson.
Yet most of the artists here probably never considered their work to be of the termite persuasion. Molesworth brings together about 30 big- and not-so-big-name artists. One is Joshiah McElheny, whose An End to Modernity (2005) takes as its subject the Big Bang, and also the cosmically-inspired "Sputnik" chandeliers at the Metropolitan Opera House. Another McElheny is paired with a Vija Celmins Night Sky and a Rodney McMillian painting of a single lemon against a black void.
One of the marquee works is Charles Ray's Tractor (2005). Ray found a junked tractor in a San Fernando Valley backyard and bought it for $500. A team of assistants disassembled it and modeled its components for casting in aluminum. Ray chose meticulous and "lazy" assistants but ultimately found that "an industrial object needs to have a gestalt far stronger than any of its constituent parts. I think of this sculpture as a tractor in heaven. I would like to rename it Philosophical object."

As I read that, it's both white elephant and termite—like Citizen Kane? That's how this show works. It leaves you thinking how works fit in to Farber's framework.

Molesworth met resistance when pitching the show. "People would look at me blankly," she wrote, "and I would just mumble, defeated, 'the show is basically about still life.'" Actually, that's not a bad description. Forget John Wayne. It is a still-life show, with a side of intimism.