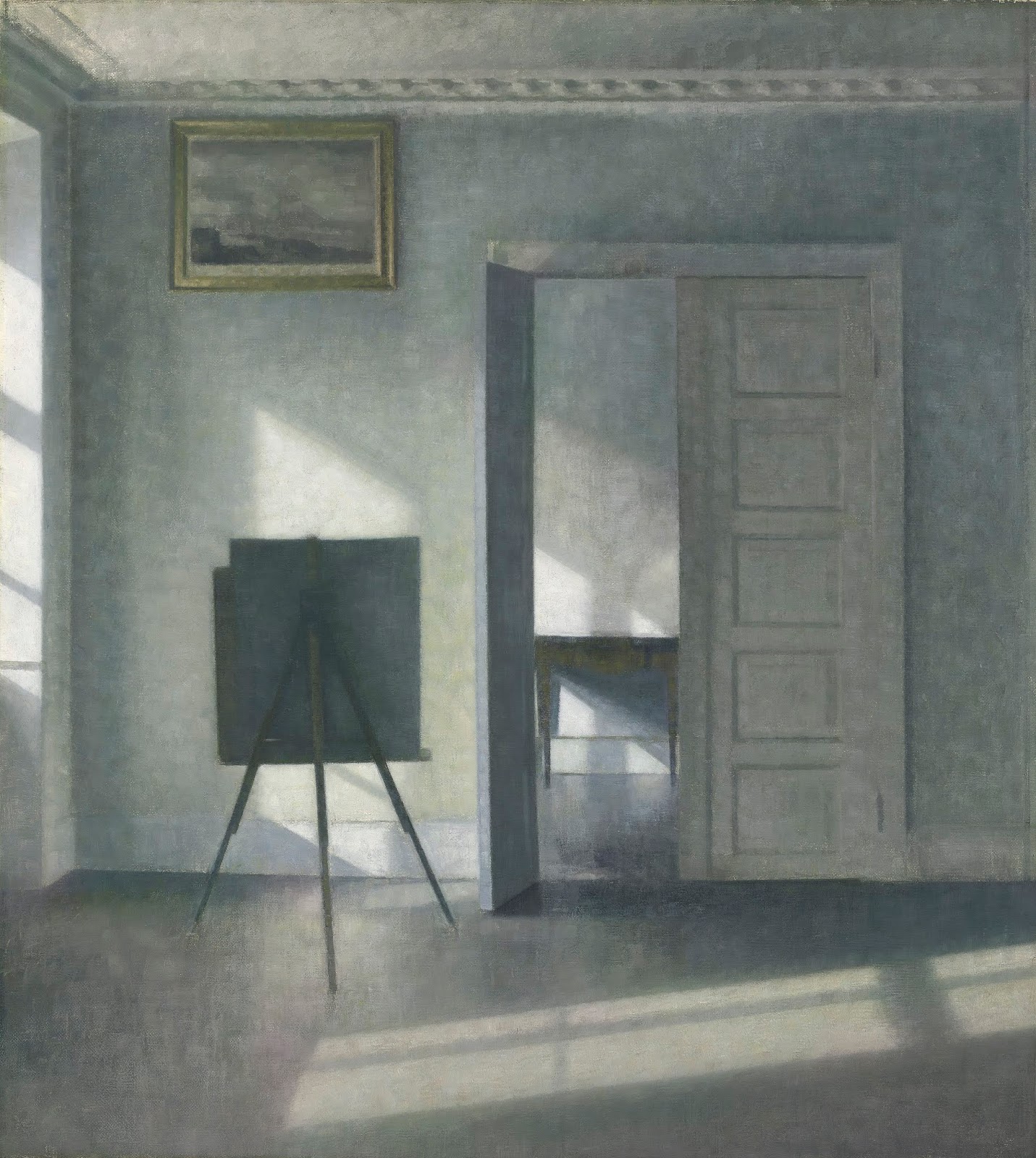 The Getty Museum has acquired Danish artist Vilhelm Hammershøi's Interior with an Easel, Bredgade 25 (1912), a painting that was auctioned at Christie's this October for $5,037,500. It's to go on view at the Getty Center tomorrow (Dec. 18).

Hammershøi (1864-1916) is often compared to Vermeer for his treatment of cool northern light. Though he painted contemplative figures at windows or tables, he is most admired for his spare interiors without a human presence. The rooms are unnaturally bare of furniture and seem to anticipate abstraction. The Getty painting can be regarded as a self-portrait, for it shows an easel in the artist's home/studio in Copenhagen. It measures 31 by 27-3/4 inches.

Admired in his time, Hammershøi was nearly forgotten outside of Scandinavia until recently. The Guggenheim presented Hammershøi's first U.S. exhibition in 1998, paired incongruously with a motorcycle show. In recent years museums in Holland, Frankfurt, Tokyo, and several North American cities have acquired paintings by Hammershøi. As far as I can tell (with help from readers!), the Getty painting is the fifth Hammershøi in an American museum collection. The others are at the Boston Museum of Fine Arts, the Detroit Institute of Arts, the Toledo Museum of Art, and the Metropolitan Museum. In Canada the Art Gallery of Ontario and the National Gallery acquired Hammershøi paintings in the past few years.
Getty watchers will note that Interior with an Easel is dated 1912, after the collection's self-imposed cut-off of 1900. A few years ago the museum bought a 1908 Rodin sculpture. The evolving policy seems to allow acquisition of post-1900 works by artists who made their reputation before 1900.

In fact the Hammershøi ought to fit well with the collection's other symbolism-inflected Northern works, such as those by Munch, Böcklin, and Khnopff. It joins an earlier painting by Danish "Golden Age" artist Christen Schjellerup Købke.

Anonymous said…
What a gorgeous painting! I love its simplicity. Does this mean Getty will branch out and buy more modern works?
December 17, 2018 at 11:22 AM

Anonymous said…
There are also paintings by Hammershøi at the MFA in Boston and the Art Gallery of Ontario. The Boston painting arrived in 1985, so may actually have been the first of the group to arrive in a North American museum. There are also a number in private collections.
December 19, 2018 at 1:19 PM

William Poundstone said…
Thanks, have updated the post to mention Boston, Toronto (and Ottawa!)
December 19, 2018 at 2:58 PM