LACMA's Unframed blog says the Ahmanson Building's European galleries will close by Feb. 3, 2019, in preparation for the Peter Zumthor project. The museum's east campus is looking like a mall that lost its anchor stores. After Feb. 3, there will be virtually no permanent collection spaces save for those for Korea, the Pacific Islands, and modern art.

(Tyler Green observes that LACMA's "mass closures" have not been accompanied by a discount in admission prices.) 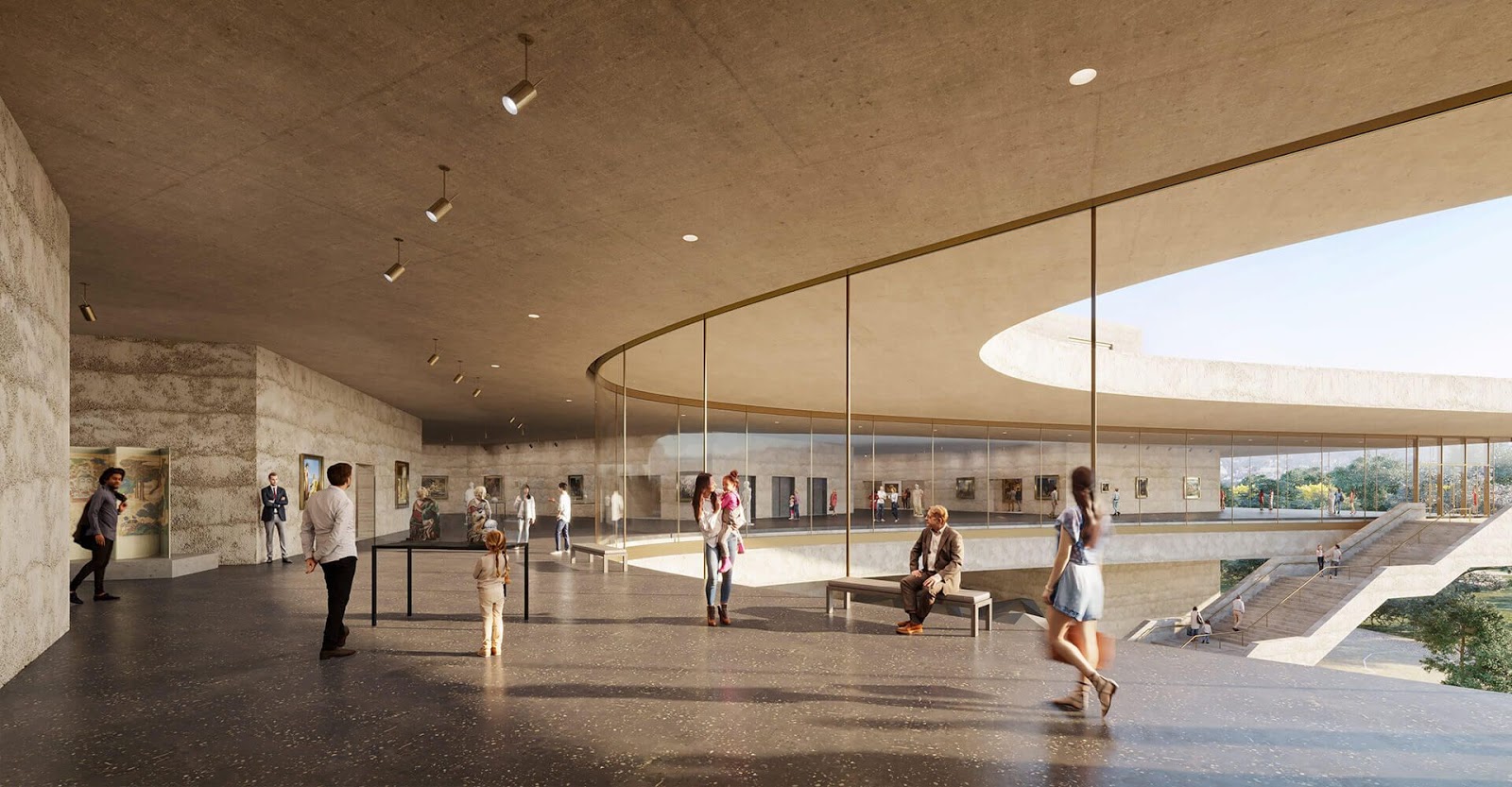 Meanwhile the Wilshire-spanning Zumthor building is still somewhere short of a done deal. This past July Michael Govan told the Los Angeles Times: "We basically need to be at $600 million [in pledges] by the end of this calendar year." Otherwise, "It's not gonna work."

LACMA then had raised about $550 million. No donations have been announced since.
Another unknown is the Jerry Perenchio collection of Impressionist and Modern art, promised to LACMA before the collector's death on the condition that the Zumthor building be completed "in a timely manner." The L.A. Times reported that

Perenchio said he was putting provisions in his will regarding the donation and the completion of the new building. He said a delay of one or two years wouldn't affect the gift.

At that point (Nov. 2014) opening was slated for 2023. Yesterday's LACMA blog put the Zumthor opening at "the end of 2023." That's little or no slippage in four years, which is remarkable as museum construction projects go.
Email Post
Labels: LACMA Michael Govan Peter Zumthor

Anonymous said…
The Geffen is free on Thursdays and weekends through March, but not apparently every day of the week. But still better than nothing. Good move.

By contrast, Michael Govan is either wittingly or unwittingly ruining LACMA. Although he has managed to increase attendance for the past several years, that will now be destroyed by people not wanting to visit a half-open museum.

The Zumthor building will have less exhibition space, not more, than the current buildings? Really?

LACMA has been awash in money for decades. Not.

Mr Govan, isn't it time you retire or move on?

If Jerry Perenchio hadn't been such "I've got good news and bad news" type philanthropist, he'd have given his gift no strings attached.

Anonymous said…
The Zumthor building can only improve the experience of LACMA, not ruin it. The current buildings are haphazard and a confusing mess. And the Perreira buildings aren’t good enough to be saved (Most of his aren’t, including that tumor attached to the LA Times building). More exhibition space isn’t needed. LACMA doesn’t have enough great artwork to fill it. What it needs is consolidation. A few years without LACMA will obviously impact the art scene in LA, but the city is also experiencing an explosion of art institutions. There’s enough to see in LA that can fill the void while LACMA is under construction.
December 14, 2018 at 1:16 AM

Anonymous said…
LACMA doesn't have - has never had - the type of budget that allows a costly demolition and massive reconstruction. Pouring huge resources into the Zumthor will force the museum into a sea of red ink for years to come.

It will be similar to a moderate-income family taking on the mortgage of a mansion in Beverly Hills and moving from their two-bedroom in Van Nuys to a 9,000-sf-spec house north of Wilshire.

Govan is coming perilously close to doing to LACMA what a former director, Thomas Krens, did to the Guggenheim in New York 10 years ago. I hope Govan doesn't end up as pathetic as Barry Munitz was, formerly of the Getty.

Anonymous said…
While I still not fond of the Zumthor design, LAHSA desperately needs to consolidate its buildings. The current buildings are falling apart, the layout is confusing and the lighting is horrible. LACMA has a good art collection and the Perenchio bequest will help the museum compete with The Getty's and Norton Simon's European art collection. A new building will better display the art.

juanito said…
Govan's Conceit would be anti-urban, would impose a quasi-twelve lane freeway overpass across Wilshire and divide the Wilshire Corridor east from west.

He ought to be required to post a demolition bond. Is there a structural engineer who would venture to absolutely guarantee that Zumthor's design could survive a major seismic event? At the very least, Govan ought to be held resposible for obtaining plate glass insurance, in case of the slightest seismic event ever occurring: all of that plate glass lining all of the extensive cantilevers - with separate foundations set amidst asphaltic goo.

Anonymous said…
@JohnCrandell I've thought about that too. There are several underground tar pits around Wilshire Blvd, so the ground isn't entirely stable. I've been waiting for Govan and Zumthor to discuss what would happen in the event of a major earthquake, but neither of them have mentioned it. It's one thing to lose a building to an earthquake since buildings can always be rebuilt, but LA County's art collection cannot be reproduced if destroyed.
December 17, 2018 at 8:20 AM

Anonymous said…
Someone above wrote "LACMA doesn't have enough great artworks to fill it." That's another reason why Govan is even more foolish and irresponsible to be pouring limited funds into a totally new building instead of reserving monies for acquisitions.

Jerry Perenchio's bequest reportedly requiring the museum put up a totally new building may be a case of "good news, bad news." LACMA will end up with a new (and earthquake vulnerable?) building that Perenchio wanted and the collection he conditionally promised. But everything else about the museum will turn into a financial, logistical black hole.
December 21, 2018 at 7:21 AM